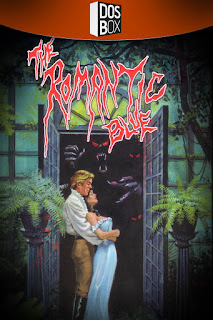 It's Valentine's Day today. I've already celebrated it with death and destruction, but that doesn't seem like enough to mark such an occasion. How about adding the ghosts and gore of The Romantic Blue? Surely that will make any date doe-eyed.

Developed by William R. Fisher III Studios who'd previously found cult success with the shareware horror adventure The Last Half of Darkness, this atmospheric title released in 1994 is romantic in both senses of the word. There's a true Gothic romance at play that harks back to Dracula or The Phantom of the Opera, but also a strangely touching love story.

Miranda is a lovelorn member of an evil cult known as the Sisterhood. This cult, ruled by the resurrected Morella has taken control of the village where young girls are taken in to learn their ways. They are forbidden to fall in love for fear of the supernatural Servants who lurk in the shadows. Yet Miranda still falls for Jack who has unknowingly captured her heart by playing beautiful music on the piano every night. When the moon rises, she sneaks out to the church graveyard to dance to the melody. Things take a turn for the worse when she confides in Cassandra, a Sister living outside of the convent. By the time she awakes the next morning, Cassandra has turned up dead. Struck with grief, she uses the magic knowledge she has learned to summon a stranger (you) to the village and save them all from the Morella and the evil Sisterhood.

That's quite a tale - and one that's far better told in the accompanying storybook - but the plot never quite gels in the actual game. The confused and rushed intro leaves you grasping for a basic plot and any revelations in-game seem to have been truncated into short blurbs. Right from the off you can tell that this was a low-budget title. Even for 1994 the graphics are simple and the mechanics a touch unpolished, yet funnily enough none of this really matters during play. The graphics are almost entirely made of the colour blue, making the streets of the village feel like the dead of night. While the low-res details are quite hard to make out as a result, there's still a palpable sense of atmosphere that's so strong it's enough to carry the entire game.

The game-play takes place in the first-person, with the relevant icons on the bottom. On the bottom left are the save options, your inventory bag and the action buttons which are cycled through with a right mouse click. These actions are look, operate, take and move with the occasional ability to speak with a question mark icon. The game has a habit of holding the text on-screen until the next button press, so if you want a clear field of view, you'll have to right-click and cycle all the way back to your desired function. It's quite frustrating and makes the large, ever-present exit button on the bottom right very tempting.

You begin the adventure in an ominously spooky crypt which is something I would consider romantic in the traditional sense. As soon as you exit, you're confronted with a girl draped over a gravestone. She is Miranda weeping over her lost friend and unrequited love - I'm no expert but surely that's the other kind of romance? From here you can explore the forever-blue village, occasionally bumping into those that go bump in the night. Considering the limited low-resolution graphics, these scares are quite successful. The cleverly chosen art design keeps you on edge as you explore, sending shivers down your spine with every encounter - supernatural or otherwise. Because everything is so dark, it takes a moment to register what's happening on-screen (or at least it does to my bespectacled self). I found that on occasion, I would be in a room and suddenly realise I'm not alone. There's another human in here with me! Most characters are introduced with music, jump scares or the scratchy voice sample recorded with an echo filter on overkill. Those that aren't presented like this are the most chilling in my mind, silently lurking in the background.

Later on, you'll be required to traverse a maze-like crypt filled with monsters (and money). The game-play here turns into that of a basic early dungeon crawler where fighting enemies (if you have the sword) and a health management is the done thing. You can easily run away from the danger if need be, and there are the odd spells to help you on your way but the segment is relatively brief and easy. Just make sure you have some graph paper handy to map out the maze-like catacombs.

In my research for romantic games to feature this weekend, there's not really that much to choose from - unless overly sexualised Japanese dating sims are your thing. Even those fondly remembered classics like Leisure Suit Larry are more smut than smooch. Modern games are doing better by exploring mature relationships in big-budget RPGs or featuring the more tender approach in indie titles such as To The Moon or Gone Home. There's such a huge gap in the market that it got me wondering why romance isn't a major theme explored in games. Maybe one day we'll have the video-game equivalent of a rom-com, but until then your have to get your love fix in any way you can. With a side order of death, destruction, ghosts and gore.

To download the game, follow the link below. This custom installer exclusive to The Collection Chamber uses DOSBox to bring the game to modern systems. Manual, Map and Storybook included. Tested on Windows Windows 10.


The Romantic Blue is © WRF Studios
Review, Cover Design and Installer created by me