It can be quite confusing to navigate the dark corridors of the Collection Chamber. The cobwebs are so dense that a helping hand may be needed to brush away the more tricky parts. Here dosis that hand, and the help too.

What are your PC specs?
How do I download from Mega.nz?
Help! My game's not saving!
What are the keyboard shortcuts/hotkeys for the varying programs you use?
I have issues with Game X using DOSBox. Can you help me?
But what about Windows 3.1 games?
How about Windows '95 games using DOSBox Daum or DOSBox-X?
But this Windows '95 / Windows '98 game uses PCEm...
What if it uses DxWind? Is there anything I should know?
This game is a multi-disk game. How do I change the CDs?
Game X isn't installing! Please help!
Game X uses dgVoodoo or runs natively on modern Windows but it's still not working.
I get an antivirus alert from some of your games!
Can you release this and that game from the Chamber?
What games won't you free from the Chamber?
Will you review any more movies?
My question is not answered here. Contact me.

What are your PC Specs?

I play and test all games on my own setup, so performance may vary depending on your own computer's specs, especially when emulating the more demanding games. I only test the games featured on the site on my setup (I am one man, not a corporation with a multi-rig testing team), so can only go by what works for me. If you run into a problem I cannot replicate, I will be limited in how I can help.

All of my installers are hosted on Mega.nz. This third-party site offers decent speeds and a clutter-free interface. The image below is roughly what you'll see when clicking on the Download link. 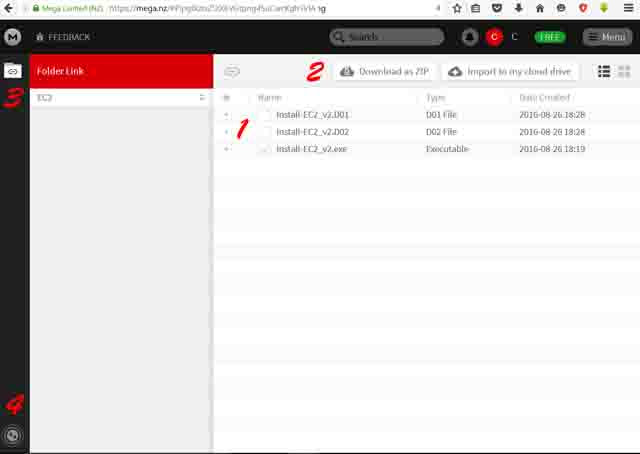 To download the game, click on each file in the list (1). Alternatively, you can download them all in a single zip file by clicking Download as Zip (2). I do not recommend this option as it is prone to fail. It will time out for free users if the game is particularly large causing the download to fail, and even if it appears not to, the file has a chance of being corrupted anyway.

Rather than download through a download manager (external or otherwise), it will download within the browser itself. You can see your list of downloads by clicking on the bottom left icon (4). To return to the list of files, click on the top left icon (3). Do not close the browser or the tab the page is on as it will cancel the download.

Because of the nature of Mega, older browsers are not supported. Firefox, Chrome and Opera have the most support. You may also need to delete your cookies and cache files if the page isn't working as expected.

For more, check out the Mega FAQ

Help! My game's not saving!

There could be a couple of reasons reason for this and one of them is most likely my fault. The most common one is that you don't have the admin privileges to write or overwrite the save file within Program Files (the default folder for most of my early installers). The fix: run the game as admin or install outside of Program Files. All new installers will now use "C:\Games\Collection Chamber" as the default.

The other possibility is that the installer didn't create the empty save folder causing confusion withing the game itself. The programs I use to create installers don't recognise empty folders, so the SAVEGAME folder isn't created (and I often forget that this is the case). This mainly affects titles using SCUMMVM, DOS, Windows 3.1 and native Windows games (including DxWnd & dgVoodoo).

To fix it, simply create a new folder in the install directory called one of the following. One of them should work.
Other possible locations are "(INSTALL DIR)\HDD" or "(INSTALL DIR)\DXWND\(GAME CODE)" though most using the latter are newer and are most likely already working correctly. Over time, I will be fixing those known to me but until then, here's the solution.


What are the keyboard shortcuts/hotkeys for the varying programs you use?

I have issues with Game X using DOSBox. Can you help me?

I can try! Most of the games here do use DOSBox to get them working on modern installers. I've set each game up to what works on my machine, but the settings may not be the best for all users. Here are some options that could help.

But what about Windows 3.1 games?

DOSBox also emulates Windows 3.1 rather well. It's by no means perfect and needs a decent machine to run smoothly, but there are a few options if you're having trouble.

How about Windows '95 games using DOSBox Daum or DOSBox-X?

While DOSBox cannot emulate Windows '95, modified versions such as DOSBox Daum or DOSBox-X can. It can still be very buggy, but many games do work quite nicely, especially in the adventure game genre. You'll need a beast of a machine to run games smoothly though, and is often limited to systems with 64-bit processors (x64) and not 32-bit (x86).

Most of the suggestions for regular DOS or Windows 3.1 games mentioned above will not work here, but there are still a few things you can try if you run into issues.

I've been using PCEm for the newer Windows '95 installers. It has a greater compatibility than DOSBox Daum, though it doesn't have as many features. It will also require a beefier machine for smooth emulation and is often limited to systems with 64-bit processors (x64) and not 32-bit (x86). A few games will use an emulated version of Windows '98 and I suspect the requirements for these are even higher. Here are a few points of note...


What if it uses DxWind or dgVoodoo? Is there anything I should know?

DxWind is not an emulator per se but uses wraparounds and hooks to get around any incompatibilities with modern systems. It was originally designed to run games in a window even if the original program doesn't allow for it but it grew to include a variety of other very useful features. With this in mind, I'm not entirely confident each user will get the same result and therefore I've included some ChamberNotes with each release detailing the options I've used, any problems I encountered (if any) and how I fixed them. With this info, I hope users can pinpoint any errors and play with the settings themselves. I can only test the game on my rig, so will be limited in my ability to help if you run into a problem I cannot replicate.

This game is a multi-disk game. How do I change the CDs?

Only large Multi-CD games using DOSBox and its variants will perhaps ask to change disks. Press Ctrl+F4 to cycle through them. Disk changes in Windows '95 games are for the most part eliminated, automatic or you just need to click 'OK' when the message pops up. Read the included ChamberNotes.txt for more detailed game specific information.

For CD or floppy disk-based emulated console games (eg PlayStation or Amiga), details on how to swap disks are also included in the game's custom menu.

There are a few reasons why any given game installer isn't working. Here are the most common.

Game X uses dgVoodoo or runs natively on modern Windows but it's still not working.

My knowledge is rather limited for native Windows games. These will often use a crack or patch from a third party to get them working on Windows 10. I have recently been updating many of my previous Windows native games to use DxWnd and/or dgVoodoo. This helps with compatibility on a number of native Windows games. Read the DxWnd section of the FAQ for info on that program, or read on for notes about dgVoodoo.

dgVoodoo 2 is a graphics wrapper that converts old graphics APIs to Direct3D 11 or Direct3D 12 which greatly improves compatibility for modern Windows.


I get an antivirus alert from some of your games!

It is relatively common for antivirus programs to come back with false positives. Some programs look for whether a program is from a registered company and anything else is deemed 'unsafe'.

Here's a little info about that phenomenon
https://www.howtogeek.com/180162/how-to-tell-if-a-virus-is-actually-a-false-positive/

I assure you, my computer is clean and every file is created in pretty much the same way so it's random what gets flagged up. If you're unsure, I understand if you don't want to risk using it.


Can you release this and that game from the Chamber?

Possibly. I've recently stopped replying to most request comments due to the large number of them, but keep requesting them anyway (there's only so many ways to say 'maybe'). I do read them and do my best to keep a log, whether or not you get a reply.

I can't guarantee I'll do any work on any of them though, let alone spend the time to get it working. If I find the game interesting enough I'll likely give it a go at some point but can give no timeframe. Basically, no guarantees but keep 'em coming anyway!

For a general and poorly upkept list of what's already been requested, check out the following link...


What games won't you free from the Chamber?

My focus is mostly for games that have been out of print for at least 10 years (with very few exceptions) and no longer sold new or digitally as well as fan-made freeware titles (active freeware projects will link to their site). I mostly focus on games from the 90s and early 2000s as that was the golden era of gaming for me.

The copyright holders of the games hosted here seem to not care enough about their back catalogue to release them on Steam, GOG or to update them for the current consoles. Basically, any game classed as "abandonware" or "freeware" will be considered.

If a game I host is subsequently sold or the copyright holder requests it, I will remove the download and link to the store page instead. I will do this regardless of how well they sell it. Remakes, remasters and re-releases of ports that are generally the same will also trigger its removal. If you are the copyright holder, you can contact me at collectionchamber101@outlook.com


Will you review any more movies?

Maybe. I started this site to be about the hidden gems of everything I love which includes movies, TV shows and nerd culture in general. As time went on, I got a better response from my game reviews and their uploads. I also enjoy writing about them more as they have nothing to do with my professional life. I wouldn't rule it out if something interesting comes along that I want to share but at the moment it's restricted to the year-end Top 10 retrospectives.


My question is not answered here.

Ask and I shall respond :)

You can email me at


There are a lot of comments on this page! As such, I'll be periodically be deleting them. You can find an archive of those now gone in the link below.