ECHO NIGHT 2: THE LORD OF NIGHTMARES 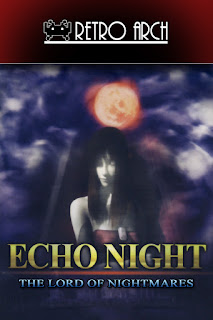 Until recently, console gaming has mainly been the domain of the Japanese. Their machines dominated the market with many trend-setting games being released. What few titles that made it out of Japan are often regarded as classics. The fact that many other great games were never translated is a huge loss to any gaming enthusiast. Thankfully the sequel to one of my favourite hidden gems on the PlayStation got the fan translation treatment by Gemini and Tom at Devil Hackers: Echo Night 2: The Lord of Nightmares...

Actually, the more accurate translation of that subtitle would be "The Ruler of Sleep". It may seem like a synonym to what would eventually be chosen by the translation group, but I find it to be more in keeping to the game. To explain, let's delve a little into the plot.

You are Richard Osmond who is in search of his missing girlfriend Rebecca. The police have given up so you decide to investigate yourself. Her last known location was a library where she was studying history and after a little digging, you notice one of the books contain an old picture that looks just like her. This points you in the direction of an old mansion filled with ominous goings-on.

On the way, you crash your car but are saved by a lost hiker who takes you to the mansion. His character doesn't last long and is only really there to get you used to the mechanics of the game and to prove that not everything is quite so peachy.

It's not long before you encounter your first ghost: a little boy desperate to feed his hungry fish. Every ghost - whether malevolent or not - has some unfinished business that you need to solve in order to be at peace. While not all of the trapped ghosts need to be saved to complete the game, this little boy's soul is necessary. Not only is the successful outcome necessary to progress in the story, but it tells you a lot about what is to come.

First, light plays an important role in the game. You cannot interact with this ghost until you light a candle on the windowsill. It actually unnerved me a little when I turned away from the window only to see a blacked-out apparition before me. It's rendered in all of that blocky PlayStation goodness, but much like the first game, the atmosphere is palpable. The more vicious ghosts who will kill you if given the chance can only be repelled by turning on the light switches - something that eluded me on my first playthrough. You cannot fight them, nor do you have any weapons, but these encounters are as tense as any other survival horror.

In the process of releasing souls, you can often be transported into the past. Rooms will revert to their original vibrant colours and the once blackened ghosts will be fully realised. In the room where the boy is, for example, the once cracked and empty fish tank will now contain colourful fish which the boy wishes to feed. I wouldn't exactly call this segment a nightmare but still spooky nonetheless.

In all probability the "sleep" or "nightmare" refers to your girlfriend Rebecca. If you explore the mansion, you will come across a room set up to look like a crypt of some sort. At the far end is Rebecca (or someone who looks like her) in an elaborate see-through coffin. She is seemingly asleep, but who put her there and why? To say any more would spoil the game.

The controls are much the same as the first game, yet the X and O buttons are reversed - a configuration that has always been the case in Japan. This is some kind of cultural thing more than a placement thing (teachers mark correct answers with an O rather than a tick), but I've made the emulated keyboard controls the same as the first game released in the US. It's still in the first person and feels just as clunky as it ever was but it doesn't hinder the game as much it could had there been action sequences.

There's also a lot less pontificating about the nature of the soul. This could be due to the choices made by the Devil Hackers team which is expertly done. Every piece of text - including those which are part of the environment - has been translated. It's so well done it could be mistaken for a professional translation had it not been for the fact that all dialogue is still spoken in Japanese. It still has subtitles so it's not really an issue but it does seem a bit weird considering the game takes place in America.

For anyone who loved the adventuring style of the original game, this sequel is a must-play. While the graphics and mechanics are pretty much the same, the story and how it's presented is much more focused. I'm thankful for the team at Devil Hackers to finally allow me to play this game.

To download the game, follow the link below. This custom installer exclusive to The Collection Chamber uses Retroarch with a Mednafen_PSX core to emulate it on PCs. Keyboard controls are mapped to my preferred optimal specifications. Xbox 360 controllers supported. Tested on Windows 10.


Echo Night 2 is © FromSoftware
Review, Cover Design and Installer created by me