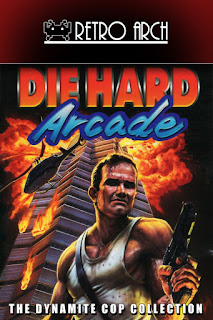 Released in 1996 for Arcades and later the SEGA Saturn, Die Hard Arcade acts as a sequel of sorts to the original 1988 movie. Player 1 controls John McClane while Player 2 gets to embody a wholly new character: Kris Thompson (who plays exactly the same). Both are tasked with rescuing the daughter of the Nakatomi Corporation's president from a terrorist group that have taken over the building. You can kick, punch and jump in the 3D environment and with a combination of the three you can perform a variety of moves. The punch button is also used to pick up items such as health and shields as well as weapons like a mop handle or rocket launcher.

The fighting is actually a lot more nuanced than many other beat-em-ups with a moveset that's closer to that of a one-on-one fighter. Grabs, throws and parries all come in handy for gamers willing to learn their execution but even novices will pull off an intense fight by button mashing. You do have to watch out for environmental hazards though. From the dangerously giant spinning fans to a firetruck's water hose, the chaos onscreen can overwhelm at times but it never feels like it's trolling the player for more coins. Regular gamers can see a satisfying amount of the game in a single life.

Occasionally the gameplay is broken up with a few quick-time-events. In the sequels, these can change the course of the game depending on whether you fail or succeed but for the first outing, they only seem to affect your health. You'll need to remember which button does what, even in the Saturn version as the on-screen prompt will only say 'punch', 'kick' or 'jump' and not reflect what you see on the joypad. It's not much of a big deal once you get used to how the game is mapped, but I found it sometimes troublesome during the pressure of the moment.


The Quick Time Events add visceral variety between
levels, and can even change the course of the game.

Around 2006, SEGA released an updated version for the PlayStation 2 exclusively in Japan. Around this time, they were doing this with many of their classic games to varying degrees of success under the SEGA Ages label. A small number came over here in the SEGA Ages collection, but the original Dynamite Deka remained in Japan. It's a shame too, as it was one of the better updates. The graphics have been updated with the main character more closely resembling Bruce Willis (even though the licence is no longer involved). The gameplay remains the same, however, the quick-time sections are now unplayable to English speakers. With the game's tendency to describe an action instead of a button, you'll need to recognise the Japanese characters for the three actions. Otherwise, you have a 33% chance of getting it right.


SEGA Ages Volume 26 updates the original Dynamite Deka quite nicely.
It showcases the best Bruce Willis likeness even though it's not really a Die Hard game.

A second game in the series came about in 1999. Dynamite Deka 2 (or simply Dynamite Cop outside of Japan) plays pretty much the same but just amps up the on-screen chaos with the help of SEGA's Model 2 arcade board. This was translated to another arcade perfect port on their ill-fated DreamCast (a system that remains a personal favourite of mine). The Die Hard license had run out, but there's no denying that this is part of the same series.

John McClane is replaced by Captain Bruno Dellinger, a one-man-army and the first one called when a terrorist incident occurs. This time, the action takes place on a luxury cruise liner that's been taken over by modern-day pirates. The US President's daughter was on board so he called you personally to enlist your unique brand of wanton carnage to get her back. As a back up he also called the Navy SEALS. Two members of their team are also selectable as playable characters.

In the grand scheme of video-game plots, that seems fairly normal. Where's this bat-shit craziness I eluded to earlier? Well, the devil's in the details. Bruno's main character trait beyond blowing stuff up and trying to save his marriage is that he has a monkey sidekick called Buttons who travels with him on his shoulder. He doesn't have much of a role in the game itself, he's just there for backstory. The Navy SEALS aren't much better either when you look at their hobbies. Sergeant Jean Ivy has a penchant for sambo and kung fu alongside her active hatred of small feet while Corporal Eddie Brown moonlights for a Psychic Advice Hotline in his spare time. We're nowhere near normal here.

Enemies vary from generic ruffian to men dressed like wolves, turtles and crabs. And that's before we get off the ship and onto the pirate cove filled with duplicating magic men. But enough about the insane, let's talk fighting. The mechanics are the same as before, with three buttons denoting kick, punch and jump but the number of moves you can perform has greatly increased. You can collect power-ups that will fill up a special bar so you can unleash some super moves. Weapons have also been given an overhaul, with the ability to steal guns and magazine from your opponent without having to knock them out. A larger number of objects can be picked up and thrown too, as long as they are highlighted with a flashing square marker beneath them.


Deep Scan (left) and Periscope (right) are bonus games for the Saturn & PS2 version.
Meanwhile the DreamCast needs a lot of hoops to be passed through to play Tranquilizer Gun.

The console versions of the first two games each had a bonus arcade game from SEGA history included on the disc. The Saturn original included Deep Scan, a simple submarine bombing game from 1979, while the PS2 continued this trend with the much older Periscope from 1965, a digital version of a physical carnival game. The DreamCast has the 1980 title Tranquilizer Gun though you'd have to complete a number of missions to unlock it (and to do so again to earn extra credits!). The most interesting of these is Periscope because it's not really an arcade game so it's not to be found on emulators such as MAME yet it remains an interesting footnote in the history of SEGA.

In the mid-2000s, a Chinese developer showed interest in producing a further sequel. And SEGA let them. Asian Dynamite, or Dynamite Deka EX, is an interesting title as it's not really a sequel or remake. It retains the backbone of Dynamite Deka 2 (Dynamite Cop) including the basic room layout and level progression yet it changes almost every graphical element. Instead of a cruise liner, you parachute to the roof what appears to be a Buddhist temple. Some of those luxury ballrooms and hallways turn into different luxury ballrooms and hallways while others transport you to lush forest locations or ruined tombs. It lacks a fluid consistency but retains every ounce of fun.

The designers' clearly overractive imagination went wild with the updated mechanics. The special-move power-ups are gone, being replaced with suitcases that will change a character's clothes, identity and moveset. Bruno returns with three alter-egos; Drunk Kung Fu (a martial artist dressed in traditional Chinese clothing), Jihan Barmiyan (a weapons expert with terrorist iconography) and Miami Macho (a Hulk Hogan style wrestler dressed as a Native American). As you can see, cultural sensitivity is not the games strong suit.

Along with series regular Bruno, two new characters join the fold, both of them female. Caroline Powell can transform into the zombie-like Shindemo Shinikiiren, a super spy by the name of Miss China Connection and a kimono garbed sword-wielder Yasuda Kuniko. The wonderfully named Jennifer Genuine has the most interesting costume changes. Enamel Chokkiinu is a demon character with blades for hands and looks a lot of the female version of Voldo from Soul Calibur. There's also the court jester named The Daydream and a mystical floating Buddha called Mantra Mandala. Each character transition is big and exciting in the same way Adam would turn into He-Man. It adds an extra unpredictability to the already strange gameplay, though it can be a bit annoying when you're stuck with a dud character. After so many hits taken, you'll revert back to the regular character, each of whom can actually hold weapons and items (unlike their alter egos) so depending on what you like about the game you may not appreciate this addition. For me, it's the randomness of it all that's the main draw.

Using the long-running Naomi arcade board to get the game running, it becomes obvious that this is an alteration of the DreamCast port (which was pretty much a Naomi home console) instead of the Model 2 original. It shows in the graphical style. While no slouch, it does look very dated for a 2006 arcade release and if you look hard enough you can see the reused assets. It nevertheless remains the most fun game in the series, even though you could argue the more consistent Dynamite Cop is the best.

When it came out, Die Hard Arcade was proof positive that the beat-em-up genre could transition well to 3D at a time when not all genres and franchises were guaranteed to do so. Not only that but in my opinion, it could surpass what has come before particularly in the amount of variety on display. Even the best beat-em-ups like Streets of Rage and Double Dragon suffer from repetition but the Dynamite Deka series changes things up just enough to lessen its negative effect. To me, it stands as one of the highlights in the genre and one that should be held in the same regard those aforementioned classics. If nothing else, you'll at least have an insanely fun time.


To download the game, follow the link below. This custom installer exclusive to The Collection Chamber uses PCSX2 & DeMul to emulate the PlayStation 2 and Naomi Arcade. Uses Retroarch with the MAME 2010, Mednafen Saturn & Reicast cores to emulate the other arcade and console games. XBox 360 controllers supported. Manuals for most games included. Tested on Windows 10. 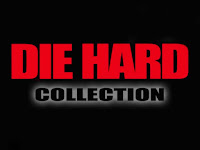 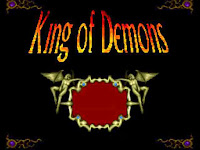 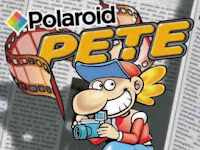