THE ABYSS: INCIDENT AT EUROPA 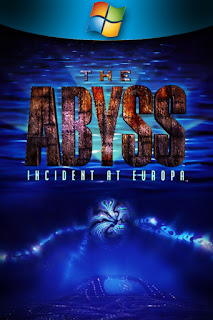 Out of all of James Camerons' back catalogue of blockbusters, I've always felt The Abyss to be a bit underappreciated. Sure, the visual effects were a milestone in moviemaking but underneath all of that is a thought-provoking sci-fi that's as deep as the depths the story takes you. In 1998, a year shy of its 10th anniversary, a little known developer by the name of Sound Source Interactive took that ageing I.P. and created a somewhat forgotten first-person action-adventure.

Set several years after the movie, the sea-like aliens are now working with human scientists in the research facility known as Deepcore. Contact has been lost, and you, as either Bud or Lindsey Brigman have been tasked to investigate. It turns out that a virus from Jupiter's moon Europa has begun deforming all life forms - alien and human alike - turning them into violent Lovecraftian beasts.


Bump into the environment to open cabinets or pick up items such as keycards (left).
To use them, highlight them from the inventory and press 'space' (right).

In essence, The Abyss is a survival horror played in the first person. You navigate your way through a maze-like ship, collect keys, press buttons and avoid encounters with the shuffling crew members. Is it just me or is this sounding a lot like Resident Evil? Even juggling with weapons and ammo is a key feature. You are never really adequately equipped to deal with the hostile forces, which can never fully be killed. Your only offence is a stun gun with woefully little capacity. It can knock over most creatures in two hits, though at first, the pitiful weapon can only carry enough energy for a maximum of three. On every floor, a small number of recharges stations can replenish the blasts, but you'll almost certainly have to master the artful skill of dodging. While not always difficult, it's not that easy either thanks to the keyboard-only controls and slow turning speed.

The more you play, the more you'll quickly learn their limitations. When in your line of sight, they will take their sweet time meandering in your direction. If there are any obstacles blocking them, they will either get stuck behind it or find the simplest alternative route. Keep moving, as any door with a step - which is most of them - will keep them here is that they will often lurk outside your only exit, blocking your path. And if you have already used 2 out of your 3 shots, you'll be stuck there else risk taking damage.


Creatures will get stuck on the smallest of steps. Use this to your advantage.

Some creatures cannot be downed, even temporarily. These will require you to either perform the worst recreation of a Benny Hill sketch as you attempt to collect items and solve puzzles or devise a way to imprison them. In the first encounter of such enemies, there is a large area that can be blocked off with a force field. You can lure the two roaming horrors there and, if you time it right, trap them by running over to a nearby button and pressing it.

If you touch any of them, you will lose health. There are a number of single-use first aid kids scattered around which will refill your health bar located on the top left. These can be found attached to walls, though in later levels these may be replaced with alternatives like unappetising seaweed.


A recharge station to replenish your stun gun (left).
You'll want to hunt down all of the (slightly) better weapons (right).

You also have an air bar on the top right, which is used when diving underwater. In these sections, which you'll need all the right gear to get to, are slow-moving events. In the first one, which is optional, you can find a much-needed upgrade to your weapon, increasing its number of charges from 3 to 50. At the beginning of the next stage, you'll have to frantically gold the A key to swim up and reach a viaduct to enter the alien research station.

At the bottom of your screen, you can see your inventory. This can be scrolled left and right using the square bracket keys. There are a number of simple puzzles that will require good use of your random collection, but it's the plethora of keys and keycards that will get the most use, at least during the first level.


First aid kits refill your health (left) though the alien equivalent is a mountain of seaweed (right).

To the left of this is your life scanner. Whenever another lifeform is near, the gauge will increase accompanied by a grating beeping, static sound. To fair, this is quite useful as you have little else in which to assess your surroundings. On the far right is a log of conversations you've had over comms. Press P to repeat the highlighted one, or scroll through them with the semi-colon (;) and apostrophe (') keys.

These lines of dialogue are few and far between, making much of your adventure a solitary one. But when your partner does speak up, they offer some nice interactions between the two player characters. Depending on who you choose - Bud or Lindsey - they will swap roles. One will be the protagonist while the other your communications guide. They have some nice banter too, including one that shames me on my own lack of an exercise regimen. Most of the sparse story is garnered from these moments, although you can find some depressing VHS tapes in the rec-room. You'll have to find a working TV to play them though.


Actual maps for the second and third stages. Even without the multiple levels,
they are insanely labyrinthine. Find the full set HERE.

While I like the idea of exploration, enemy dodging and weapon resource management, these go out the window by the second level. There are some basic tile puzzles here and there but the main feature is corridors, hallways and more corridors. Everything looks the same here, and there's a vast amount of square mileage to cover. After almost an hour of play, I got so lost, that I ventured into the very little online information this game has in search of a map. That map looks like a psychedelic cross between a Pollock splatter painting and a kaleidoscopic Rorschach test. How anyone is supposed to find their way around is anyone's guess. Sadly, there is no in-game map which would've alleviated the majority of The Abyss' design problems.

We may be in the middle of the great pause, but time still ticks and I gave up trying to get any further. The Abyss: Incident at Europe could have been an interesting title but it's stymied by undercooked design, graphics that were 5-years old even at the time and a thoughtless plot that obviously tried to cash in on Resident Evil's success. A far cry from the captivating sci-fi and pop-philosophy of the movie.

To download the game, follow the link below. This is a custom installer exclusive to The Collection Chamber uses  DxWind to run on modern systems. Read the ChamberNotes for more detailed information. Tested on Windows 10.

The Abyss: Incident at Europa is © Sound Source Interactive
The Abyss (the movie) is © Twentieth Century Fox
Review, Cover Design and Installer created by me 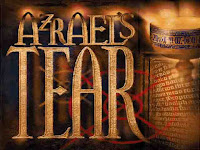 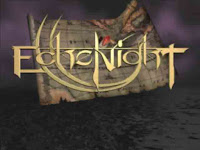