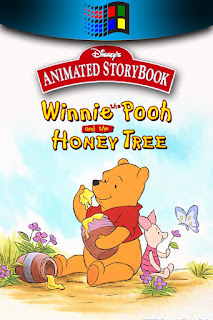 This is the second title in the range of educational storybooks from Disney and you can tell they've learned a lot since The Lion King came out a year earlier. It's still not quite as involving as some of the later titles, which is perhaps due to the story's small size, but it's a tale that retains all of charm you'd expect from Winnie the Pooh.

The stories of A.A. Milne do lend themselves very well to this kind of adaptation, although I do feel it  could've played around with the inventive concrete poetry a bit more. This is the story of Winnie the Pooh and the Honey Tree taken form the 1966 short, which was compiled with other shorts into the 1977 feature film. Pooh's out of honey and after a failed attempt to get some more, empties Rabbit's well-stocked cupboards. It's a small story, wonderfully told by Disney's animators, but even that segment's brief running time has been condensed in storybook form.

Looking at the pick-a-page menu, you'll find there's a lot to explore, but in reality little over half are fully interactive. There are still the usual sing-along segments which thankfully use the original audio and four basic mini-games. Perhaps due to the very young age Winnie the Pooh appeals to, these games are incredibly easy. The first game is a descriptive matching puzzle where you find the right toy based on what Piglet says. In the next puzzle you're goal is to satiate Pooh's rumbly tumbly by searching for a honey pot hidden in Rabbit's drawers and shelves. This is directly followed with yet another matching game, this time you're tasked with tidying up Rabbit's destroyed warren by putting his ornaments back in the right spot. Lastly there an almost broken butterfly catching game with Roo. No matter where I clicked, I somehow managed to catch the colourful insects no matter what. It's so easy a baby could do it - and that's perhaps the point.

The official Disney voice actors, who began taking on the roles in 1988 with The New Adventures of Winnie the Pooh, play the roles as wonderfully as can be expected. Jim Cummings' Pooh is almost indistinguishable to Sterling Holloway's lovable original. In fact, you'd be hard pushed to tell the difference between any of the new voices - a testament to Disney's commitment to keeping their properties accurate and evergreen.

The animation has been vastly improved over The Lion King. Where that felt like re-drawn sprites over a static backdrop, The Hundred Acre Wood makes you believe it was created with original animation cells. Despite it's flaws, it makes for a wonderfully entertaining distraction for any 4-year-old and one that doesn't make the adults cringe, which is more that can be said for a lot today's children's programming (Pepper Pig, I'm looking at you).

Disney's Animated Storybook: Winnie the Pooh and the Honey Tree is © Disney Interactive
Review, Cover Design and Installer created by me 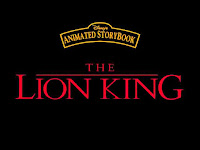 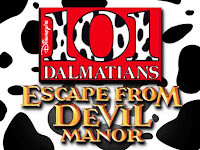 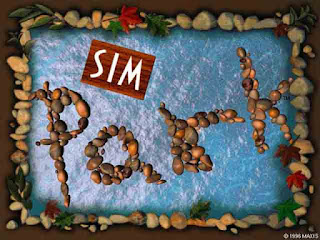