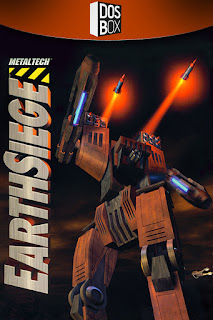 EarthSiege was the first game in the Metaltech series to be released way back in 1994. While Mechwarrior and the BattleTech series got there first five years earlier, I always found Dynamix's Metaltech universe (an obvious rip-off name if ever there was one) to be far superior.
The reviews at the time were somewhat mixed. Initially, the game suffered from many problems, including a badly implemented career mode, but once the updates arrived these issues subsided A later expansion pack that added extra environments, missions and mechs beefed up the game even more.

Right from the off, there are three modes of play. Instant Action lands you straight in the middle of a warzone (or as much of one 1994 PC specs would allow). This is the most frenetic option, but you never know what you're gonna get. Single Mission allows you to choose from a number of levels for a single playthrough while career mode pieces them together into an ongoing story. Career mode also has the added bonus of scavenging for parts and upgrading your mech.

The expansion missions are far more diverse, but are still structured in the same way: go to waypoint, destroy enemies, rinse and repeat. To access these additional levels is also a bit cumbersome. The toggle to switch expansions is in the options menu which basically resets the game with the new career mode replacing the old. The save files are separate too, meaning any salvaged weapons cannot be carried over.

The game itself, like most mech games I've played, can be a little daunting at first. The controls appear to overly complicated and built around one of those overly expensive joysticks that was all the rage back then. They still are too, but the joypad's kinda taken over the peripheral market. I've not tried either with this game but judging by the specific list of compatible models, I suspect it may be more complicated to emulate than it's worth.

The mechs, known as HERCULANs or HERCs (Humaniform-Emulation Roboticized Combat Unit with Leg-Articulated Navigation) are gigantic imposing metal beasts and the in-game HUD definitely fits. Each of the different HERCs come with their own HUD, with different layouts, but ultimately they all consist of the same thing: radar, weapons, damage etc. The wealth of information given to you at once can be quite daunting at first, but just like the controls, you'll eventually be comfortable with it.

These hunks of metal have three different areas to control: the movement, the upper torso and the thrust. In the heat of battle, it's easy to get discombobulated by unintuitive controls, but if you keep your head they can be overcome. My biggest gripe - and this expands to the sequel too - is that there is a lot of walking. And I mean a LOT. The speed of your mech is quite slow, which is good when aiming shots, but not so good to dodge them. This tends to be a staple of the genre back then and the mechanics do work around this. The downside is that travelling to your next checkpoint is a lesson in tedium. As you approach one marker, you pray the next one isn't so far. There may also be nothing but a single building waiting for you meaning another hike before you see combat again (hint: start on higher difficulty setting).

Aiming can be a little tricky too. The mouse and keyboard combination for action games wasn't truly explored until Bethesda's Terminator: Future Shock a year later and even then it took some time before it became the norm. Using the keyboard is imprecise which is disappointing when the enemies themselves, known as Cybrids, feature location-based damage. It also makes targeting the crafts flying overhead and the smaller spider-like bots a bit awkward. The limbs, weapons and torso or the enemies can each be destroyed independently of each other, but depending on where you hit, there may not be much left to salvage for yourself or one of your three partners.

The most impressive part about EarthSiege is the A.I. It's rudimentary for sure - this was 1994 after all - but it is perhaps the first title I know of where you can imagine tactical thoughts going through your opponent's minds. They will circle around you to get into the best position or hide around structures to escape your fire. Your partners are also of more help than a hindrance. You can quite possibly survive a mission by letting your team do all the shooting, though they're useless at ground to air combat.

EarthSiege is one of the most technically impressive games released in 1994 and is still very playable today. How can Dynamix possibly follow on from this?

To download the game, follow the link below. This custom installer exclusive to The Collection Chamber uses DOSBox to bring the game to modern systems. Manual and Reference Card included. Tested on Windows Windows 10. 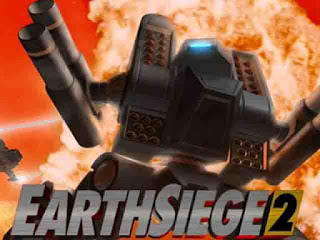