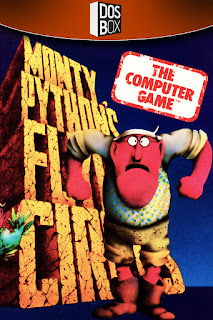 And now for something completely different...

"What we have here is a BRILLIANTLY ORIGINAL and witty interpretation of the Python Theme." ZERO 89%

"One of the tastiest slices of alternative arcade action since Venezuelan Beaver Cheese." THE ONE 85%

"If you are into surrealism, or then again even if you're a fish, then this game is the halibut for you (Eric, of course). It also breaks the ice at parties!" YOUR COMMODORE 97%

"How do you avoid exploding kittens, upper class twits and still get your Spam?" COMMODORE FORMAT magazine

After word came of the sad passing of Python alumni Terry Jones a few days ago, I've become entrenched in all things Monty Python. I briefly re-played the three games already featured on this site and picked up a classic game I've been meaning to cover for some time; Monty Python's Flying Circus (1991, Virgin Mastertronic).

Borrowing the distinct visual style of Monty Python's other Terry, Terry Gilliam, this action platformer is perhaps one of the strangest games of its type. It follows Mr Gumby, a classic character from the show, in animated form as he travels bizarre lands looking for the lost parts of his brain.

Over the course of four stages, we turn into a fish, a turkey, a human and a head on a spring. The animal stages play like a shoot 'em up, but unless you've activated the cheats, it's one of the hardest ones out there. Bullets and enemies fly at you from all sides and clunky, slow nature of the controls coupled with a large character sprite guarantees you'll be hit countless times. Your only weapon is a projectile of dead fish that travel only a few inches ahead of you. I couldn't make it till the end of the first stage without cheats and I suspect better gamers than I would still struggle.

Play with unlimited lives and energy, though, and the whole game opens up to be an enjoyably random experience. You'll witness exploding cats, a landscape of body parts and the Spanish Inquisition. No one expects the Spanish Inquisition! After each stage, you'll be given an argument to win for extra points. Say the opposite of the stiff behind the desk by pressing left or right on the joystick (or in this case, keyboard keys). Then, if you whittle down enough points to get a silly enough score, you'll feature pride of place on the silly scoreboard.

So, the game is not perfect, like licensed games as a whole, but the Dadaist absurdity of it all is fully in keeping with its namesake. Out of the two versions presented here, the Amiga port is the one to play. Scrolling is smooth instead of jerky static screens and the music and sound effects aren't as bloopy as DOS. For a quick sidetrack into Python's particular brand of comedy, Monty Python's Flying Circus: The Computer Game certainly fits the bill. 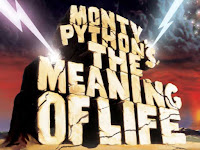 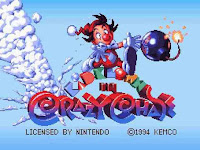 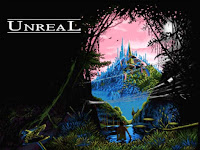