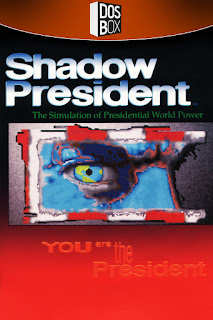 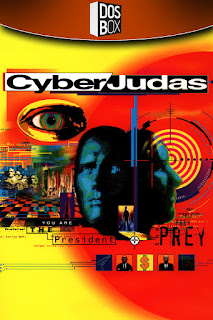 Deep within cyberspace...
You control the most powerful nation on Earth. You are armed with money, weapons and influence. You have close and trusted presidential advisors. One of them will destroy you and your world.
You are the President and the Prey.
Three styles of interaction with one of the world's leading global simulations:

- from the back of the CyberJudas box
I don't know about all of you, but I've had enough politicking in the real world of late, so let's do it in a fictional one instead! D.C. True's duology of political simulators, Shadow President and its sequel Cyber Judas from 1993 and 1996 respectively put you in the shoes of the President of the United States during a time where the batshit craziness of it all now seems quaint.

The year is 1990 and you have been elected POTUS. They'll let just about anyone do that apparently. God forbid any world events arise that need a steady and thoughtful hand. So, with the Berlin Wall toppled the year prior, Cold War sentiments lingering on and Kuwait on the cusp of being invaded by Iraq it looks like this won't be an easy term after all.

As tempting as it would be to just sit back and bomb Norway, there's some real work to do to earn re-election - Shadow President's ultimate goal. Budgets need managing, foreign aid needs sending and wars need fighting. The White House Chief of Staff will warn you of escalating situations and you can select a variety of responses, from a political coup d'etat to a deployment of troops to a FULL SCALE NUCLEAR STRIKE. I know one of these sounds more tempting than the others, but put those thoughts to one side for a minute. It's time to get some advice.

You have the National Security Advisor, the Secretary of State, the Secretary of Defense, your Press Secretary, the Director of the CIA, and the Econoimic Advisor at your desposal. Each one can all chip in on any pressing matter, giving their two cents based on their own goals and perspectives.

No matter what action you choose, your performance will be graded in four categories, ethical behaviour, ambition level, quality of life for citizens, and total world influence. You can compare your standing with any country by clicking on its location on the map. In the ensuing graph, the red bars represent that country while the yellow lines reflect your own. There's also a visual representation of their might by way of a four-quadrant image of a city giving a little reprise from charts and graphs. The more buildings in the city represnts GNP or Gross National Product. The houses on the left represents wealth of the average citizen whether it be a barren wasteland or a sprawling suburb. Their quality of life is represented by how beautiful the green park at the front is, while the structures on the right represent the military complex; arms production, military troops, and nuclear capacity.
With all these bars and graphs you're left wanting to spice things up a bit. Let's just nuke Norway.
Oh, I've been assassinated.

Shadow President was released in 1993, it eschews the VGA graphics that were more or less the norm at the time so isn't much of a looker. Three years later, it's sequel came out and the difference in visual fidelity is dramatic. It does take place in CyberSpace after all.

Much of the core stat-driven gameplay remains the same, but the visual presentation is night and day. When speaking to your advisors, you head directly to their virtual office, their avatar appearing on the empty chair as you click on it.

The layout of isn't exactly the most obvious, with information hidden behind multiple layers of icons and images. The most important areas are found in what the game refers to as the Jump Point Icons which are almost always present on the top right of the screen. Clockwise from the top, these are the Map Sector, the CIA World Factbook, the Budget Sector, the System Menu, the War Room and the Adisors.

These consultants also have call buttons at the bottom of the screen for quick access. At first glance, they function in the same way as Shadow President, but with one major game-changing difference. One of them is a mole intent on destroying you and the world. A Cyber Judas if you will. Go figure.

Because of this, the intense political intrigue is upped greatly compared to its predecessor and once you have familiarised yourself with how it all works - which can take several sessions in and of itself - you begin to feel like you're acting in your own Tom Clancy novel. The level of detail and the depth of each action's cause and effect make each playthrough very different. As well as a talented team of developers, an AI assisted by the research done by Tufts University and a proven use of the rules from Presidential Simulator, this can be put down to the exhaustive World Factbook which is included in full. It plays a major role the overall design of both games.

This real-world document created by the CIA is one hell of a read, detailing information on each and every country on the planet. Data refers to their geography, their people, their government, economy and defense forces and all have a role to play. Shadow President included the full 1990 factbook while Cyber Judas is accurate to January 1st 1993. As the game progresses, this book with update itself in response to your actions, slowly morphing from an actual document to a fantastical one. Attack Norway, and their military will increase. Nuke em, and watch their population lose thousands of citizens. It's all rather ominous watching each country shift and change due to your conduct.

But what about the Cyber Judas gumming up your plans to dominate scandinavian countries? You have to figure out who it is and weed them out. One of the ways is to plant bugs in their cyber-rooms to get intel on the private lives and background, though you have 30 seconds to do this before they catch on.

Be warned that the information you learn isn't so cut and dry. How you interpret this intel is vital; does a link to a motor company who tried to sell tanks to South America spark distrust? Does a family home mean anything if it's an Austrian Castle that's been relocated to Santa Fe, New Mexico?

Who knows. I never got it right. I just wanted to bomb Norway.
Gaining intel. Is Bradford Gillis a mole?

These presidential simulation tend to skew on the complicated side. They are confounding to first time players, especially to those who haven't played many of these types of games. The reliance of stats, graphs and info dumps don't do much to help matters. Even when you get a hang of the ins and outs of its mechanics, employing a successful strategy may still be out of reach.

Even so , there's a lot of good stuff in both Shadow President and Cyber Judas for a certain type of gamer. They're not entirely for me, but I did get a lot of enjoyment nuking Norway. Then getting assassinated for it. That must account for something, right?

To download Shadow President, follow the link below. This custom installer exclusive to The Collection Chamber uses DOSBox to bring the game to modern systems. Manual included. Tested on Windows 10.

Download Shadow President
To download CyberJudas, follow the link below. This custom installer exclusive to The Collection Chamber uses DOSBox to bring the game to modern systems. Manual included. Tested on Windows 10. 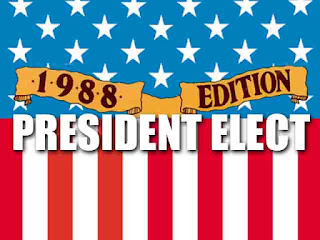 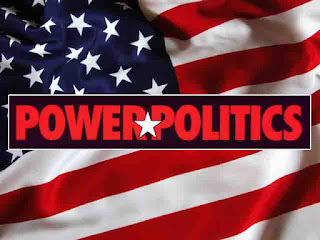 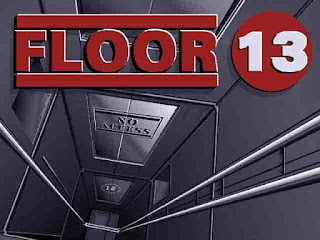