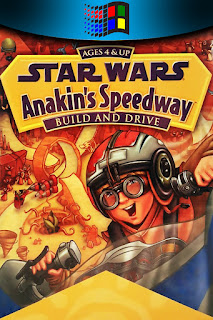 Every Course is a Learning Curve!

Anakin's Speedway is an exciting new Star Wars Podracer playset! Create thousands of Podrace test tracks filled with turns, loops, jumps and tunnels and learn the dynamics of speed and momentum! Easy-to-use, flip 'n fly tracks allow you to build a Podrace course in seconds. Master the course as your Podracer speeds through tracks filled with rich animations and funny sounds.

Right in the middle of the Phantom Menace tie-in boom, LucasArts developed a number of educational games based on the licence. Under the Lucas Learning banner, Star Wars: Anakin's Speedway taught kiddies about motion and momentum in 1999.

The concept of the game promises a lot with high-speed racing, personalised track creation and well-known racers to play as. In actuality, this is all a lie. Racing is not controlled directly, but by clicking on the three buttons at the bottom of the screen. These buttons denote your speed which will need changing on tight corners and long straights in order to get the fastest race time. In completely uninvolving and ultimately boring.

The track creation fares little better. You have access to three planets; the desert Tatooine, snowy Ando Prime and the swamplands of Baroonda. Each track is segmented into six squares which can be clicked on the cycle through a selection of pre-ordained variations. The spiel promises 'thousands' of track variations, but in truth, I'd be surprised if it barely scrapes the hundred mark.

At least the four characters are fun. You can view their stats in the Podracer's Hut that's also filled with well-animated skits and clickables. The dances performed by a pit droid in the jukebox area is far better than anything the actual game gives you. Ultimately, Anakin's Speedway has the depth of a mini-game in a better-than-average Activity Centre or Animated Storybook, but as a stand-alone title, it's something of a dud. 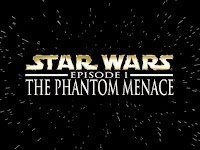 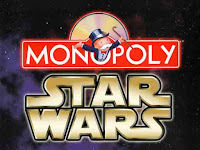 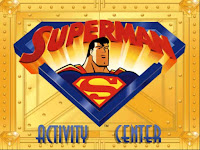