VIKINGS: THE STRATEGY OF ULTIMATE CONQUEST 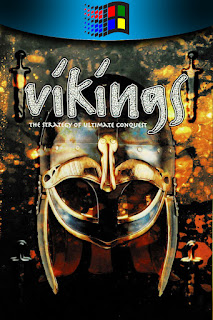 More Hated than the Huns!
More Feared than the Franks!
More Vicious than the Visigoths!

The Forces of Might and Fight, the Scourges of Scandinavia, are now set loose and ready to assault other borders and continents.

As a 9th century rack-and-ruin Viking, you must plan your destiny, scheme your moves, plot and prepare with skill and barbaric foresight - even before the slaughter begins. You will have ample oppotunity to secure information from flirrtatious barmaids and cunning storytellers and to strengthen your arms, your eemblazoned weaponry, your raiding longships. AND THEN...

Armed with hordes of fighters, archers and berserkers; an armada of formidable vessels; weapons of butchery; a raging and arrogant attitude that victory MUST BE... You and The Norsemen will wreak havoc on unsuspecting villages, battle foes hand-to-hand, disperse bandits, torch buildings, skewer bodies, crush any and all, carry off spoils. And prepare for another scourge!

~ from the back of the US box

The marauding conquests of the Viking era could be a decent setting for a strategy game. Some might even consider it the ultimate setting. Random Games, Inc and GT Interactive thought so when they released Vikings: The Strategy of Ultimate Conquest to the world in 1996.

It arrived with little fanfare thanks to some less than stellar reviews. By all accounts it was considered a game far behind its time being more like Sid Meier's Pirates than the new and popular RTS games like WarCraft or Command & Conquer. Even now, it feels archaic to play. You begin by choosing your starting stats; name, sex, country of origin - that kind of thing. Then, after a short episode of 'Story Time with Worf', we're thrust into our starting village.

There is no guidance at all in-game, yet the story plunders on as you plunder. We begin in our own little village and a small amount of coin in our coffers to buy from the merchant, upgrade our weapons from the blacksmith, buy boats from the shipwright and flirt with wenches at the tavern. Perhaps thanks to Star Trek's Michael Dorn's ever-present narration, these villages remind me of simple text adventures as you hear a bard tell his tale that may or may not lead to a quest to find treasure.


Visit the Tavern for some juicy gossip or a little flirt with the barmaid.

When you're done here, you can mount an expedition from the town hall. Once you set sail, the gameplay changes to be more explorative. You take control of your ever-moving ship using the mouse. Holding each button will turn the vessel left or right. Most of the towns and villages lie on the banks of rivers and oceans, so you can visit them directly from their docks. You will find the same types of buildings in each which, beyond the differing bard tales and maps to buy, rarely change. Those allied to you do offer reduced rates at the armoury though.

Should you feel a little roguish, you may attack them. Again, the gameplay drastically changes into something more recognisable as a strategy game. A landing party can be individually controlled from an overhead view. Regardless of their might, they will take damage, especially those fought at close quarters, but there isn't much strategy beyond wars of attrition. You begin with three men in your army, with their health displayed above their heads while in combat. You can control up to 5 if you promote more men to lieutenants when visiting your own town hall.


You won't receive a warm welcome in towns that bear animosity toward you (left).
So it's best to attack them if they look weak enough (right).

This isn't the only type of combat you'll encounter. Randomly while sailing, your man-at-arms will warn you of an incoming vessel. Should you wish to attack, a third gameplay style comes into play. Here, you take control of your ship in much the same way as the over-world with a tap of the Spacebar blasting cannonballs at your foe. Most of these ships are simple merchant vessels allowing you to enrich yourselves so you can buy that new armour you were eyeing up at the blacksmiths.

Should your ship barge into another during such a bout of naval warfare, you'll be treated to yet another gameplay type; hand-to-hand combat. Choose your weapon and take on your foe captain-to-captain. This controls more like an old-school fighter. The number pad moves you around while holding the Shift key will make each of these keys perform a move. Numbers 4-9 will swing your weapon in a number of different ways while 1-3 will defend. This plays insanely poorly, and I recommend you not even attempt it. You might have the upper hand with your ships, but you have no such luck with your hands.

You can retreat at any time by clicking on the cowering dog icon at the bottom of the screen. It's pictured this way 'cos that's what you'll be by doing so. Still, it might mean the difference between success and a game over. You'll need to heal once you're done so head on over to one of the larger friendly villages where a Rune Woman resides. She can re-tell you the same legends told by tavern's storyteller, perhaps with more detail, cast runes that tell of portents or feed you healing potions. She is remarkably useful, if a little creepy.

You don't have to attack every village to succeed. There is also the diplomatic route. The capitol of a province other than your own will host a Leader. By visiting you can take part in negotiations for an alliance, either by trade, treaty, truce, tribute or - if possible - marriage. Most of the time they'll spit in your face but should a proposal peak their interest a dowry must take place. Pay him silver and you will have bartered a peaceful alliance.

Despite its name, Vikings: The Strategy of Ultimate Conquest isn't much of a strategy game. Each of the combat types on their own are extremely lacking in depth and design and coupled with the poor loading times (which may or may not be down to the quirks of emulation), you begin to dread them. I found it best played as a Viking simulation; earn renown by questing for legendary treasures, trade with allies or barter peace with enemies. It is not the greatest of games, but the low scores it earned on release (Computer Gaming World gave it 1 star) seem extremely harsh. I find it adequately average making it underrated, if only a wee bit.

To download the game, follow the link below. This custom installer exclusive to The Collection Chamber uses the DOSBox-X build of DOSBox running Windows 3.1 to bring the game to modern systems. Manual included. Read the ChamberNotes.txt for more detailed information. Tested on Windows 10.


Viking: The Strategy of Ultimate Conquest is © Random Games, Inc
Review, Cover Design and Installer created by me 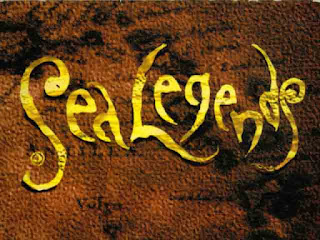 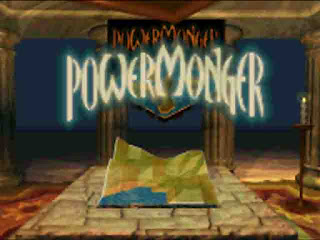 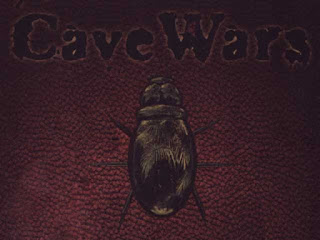