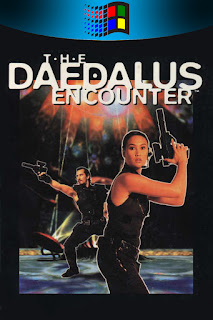 The Daedalus Encounter was always a game that interested me. I saw it sitting on the shelves of my local PC World looking very much like a movie complete with the ever-enticing circle of red that is the BBFC 15-certificate. Being a snot-nosed 12-year-old and too young for such an 'extreme' game, I instead went for Bullfrog's fantastic Magic Carpet. I've since picked up this sci-fi adventure only to find how good a decision I'd actually made.

FMV games are something of an acquired taste. Some developers choose to use the video technology as more of an aesthetic choice while others would rely on it as its core mechanic. This is what separates games such as Gabriel Knight 2 and The Pandora Directive with the likes of Johnny Mnemonic. The Daedalus Encounter fits somewhere between the two. There's a huge amount of video footage here, but there's also an attempt to provide some amount of interaction and puzzling.

This big-budget 1995 game was notable at the time for featuring some known names. It stars Tia Carrer (as the cocky space scavenger Lt. Ariel Matheson) who was then best known for Wayne's World and True Lies, but has since earned starring roles in the Relic Hunter TV series and the voice of Nani in Disney's Lilo & Stitch. It also stars Christian Bocher as Zach Smith, but you'd be hard pushed to have seen him anything, let alone anything memorable.

Both are decent actors (at least in the sphere of video games) and do well in a genre not known for Oscar-worthy performances. We begin in the middle of a space war, with Ari, Zach and yourself (named Casey O’Bannon) fighting off some evil alien craft. Your own ship gets hit during a dogfight resulting in your withdrawal to the escape pods. Ari and Zach make it out, but your pod is not so fortunate. It is struck by enemy fire, causing massive damage and leaving you with nowt but minimal brain function. On the plus side, it's the future so you can be reborn as a cyborg toaster. Two months later and the war is over. You, that is the mechanical you, are stolen from the laboratory by your comrades to join them in their venture to scavenge valuables from the wreckages the war left behind. Basically, you can't talk, you can't walk, but you can sure as hell randomly press buttons to open doors.

This all amounts to you doing the dirty work in between the banter and battles. It takes some time before any attempt at puzzle-solving rears its head. In fact I would think at least half-an-hour or so goes by (or at least it feels like it) with only a couple of clicks to provide the "interactive" in "interactive fiction". When you do have full control of your cyborg self, you are steering a probe in a limited space. Now this feels more like a traditional first-person adventure game. You can now pick up specific items, mainly orbs which are nothing more than a story McGuffin. They are alas not used in any inventory puzzles. The brain teasers are in the same vein as The 7th Guest - logic puzzles which are completely incongruous with the actual game. They are also almost universally used to open locked doors.

What is praiseworthy in the puzzle design, and something I've not really seen before is in the different types of light you can perceive in your new body. You can see the world in any spectrum you like from infra-red to ultra-violet. Doing so can reveal clues so it's best to view every door in every spectrum before you attempt to solve the riddle. It's not scientifically accurate at all but at least it gives the puzzles an extra level.

If you're still stuck, your probe also has a scanning function. It's a little like the scanning ability from the Metroid Prime series, but it's more of a chore here. Because you'd need to scan absolutely everything for those all-important clues, you'll end up seeing the scanning animation a lot of times. It varies slightly depending on the object but once you hit the half-way point, the 10-second animation feels like an eternity.

And that's the problem with FMV adventures. All too often, the developers get too enamoured with the video and forget about the game. There's an obscene amount of cut-scenes in The Daedalus Encounter, which are admittedly enjoyable for the most part, but the game-play is sorely lacking. It spans 3 CDs but I expect the actual game parts to only tally up to about one or two hours worth of play. Developers Mechadeus at least put an effort into trying something unique with the light spectrum and probe functions but it's ultimately a game that's more fun to watch than play.

To download the game, follow the link below. This custom installer exclusive to The Collection Chamber uses DOSBox running Microsoft Windows 3.1 to get the game working on modern systems. Manual Included Tested on Windows 7 and Windows 10.

The Daedalus Encounter is © Mechadeus
Review, Cover Design and Installer created by me