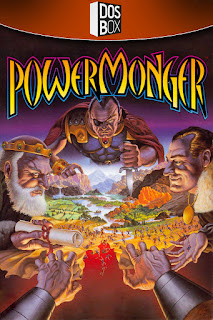 Out of all of the great God games designed by the legendary Peter Molyneux, Powermonger seems to get the least amount of love. While the likes of Populous have been given a second lease of life through digital distribution, this strategy war game is nowhere to be found which is a shame as I think it's one of Bullfrog's best from their early years...

First released to great reviews in 1990 for the Amiga and Atari ST, Powermonger was a huge success. Over the next four years it was ported over to several systems including the PC and the Super Nintendo as well as SEGA's MegaDrive and its Mega CD addon. They were no mere ports either as each had their own control scheme, redesigned graphics and the occasional cinematic. The original systems got their own extra love with a World War I themed addon.


While the Amiga had the benefit of this interesting expansion pack and the SEGA CD added cutscenes to beef up the story on the main campaign, the DOS port is in my opinion the best by far. Being released two years later, it is graphically better than the Amiga as well as having a smoother 3D engine than 1994's SEGA CD port. A game like this should also only ever be played with a mouse, which out of the console ports only the SNES version had the foresight to include.


It looks very similar to Populous. The lands are explored in isometric chunks and there's a similarly confusing smorgasbord of icons and buttons surrounding it. The difference is that this would probably be considered a RTS rather than a God game. You have no control over the terrain and you exist only to order your troops around. 1990 was before the term RTS was coined with Westwood Studio's 1992 release of Dune 2 often cited to be the first of its type. In fact, that game only polished the mechanics that Powermonger started. I wouldn't say that Powermonger is better, but there is something of a logic to the design which is only complimented by that usual Bullfrog charm.

At the beginning of the game, you're plopped into a world with no idea how to continue. There's a group of men (your army) sitting in a circle around a castle tower, perhaps waiting for their turn to pass the parcel. You instinctually click on one, which does nothing so instead you want to just punch them. Naturally you're eye comes across a icon of a muscle-bound arm. Clicking on this before you do the peasant doesn't slap them silly, but gives you a little bit of information about them. This is usually such important titbits as their name and how they like to spend their day. Inconsequential, but at least more intersting than the info for each tree.

So you've had enough of getting to know you're crew and want to attack something. There's three sword buttons to the left numbered 1-3. This isn't how you attack, but how much aggression you want. To attack a stronghold, you first have to select your aggression, then another sword icon towards the bottom of the screen, then the town on the map. Depending on how aggressive you are you'll either; overpower them with minimal casualties, kill some of them or kill all of them. If your selection is well-advised the general with reply with an enthusiastically mumbled "yes". His fuzzy speech impediment (amongst the best speech a floppy disc could allow) will lower in pitch if he doesn't agree, but like any good soldier he'll still do it anyway.

Once you've taken a village, you can ransack their food reserves as well as recruit more men to your army. This is done in the same way as attacking, instead choosing the relative icons. Look at the manual to find out which is which as the images themselves isn't particularly clear. If a larger town is taken over, a second general will join you. His avatar, and that of any other generals are represented on the top half of the screen along with some data in regards to their health, food and soldiers.

To complete a map, certain objectives have to be accomplished. They're not really conveyed to the player at all meaning it takes a lot of guessing to see if you're doing it right. In fact, the first time I played the introductory scenario I played for 10 minutes without realising I'd already won eight minutes a ago. Thankfully, most maps are simply about attacking an enemy and overtaking their lands so just focus on rampaging your neighbours. In case you're wondering, the only way to know if you've won is if the scales represented on the left has been tipped to the right. The game doesn't stop to tell you you've succeeded you just have to make sure you notice this. To carry on to the next map you have to 'retire' by clicking on the floppy disc icon - an icon which is normally reserved for non game functions like save, load and quit. To confuse matters even more, it still has those options too. Once you're back at the main menu in this fashion, you can then - and only then - continue your campaign. I spent way too much time trying to figure out this over-convoluted method which again isn't entirely clear in the user manual.


Considering the game comes on a single floppy disc, it's not short. There are 100 maps with many more in the Amiga expansion. Each one plays very similar even in the new setting which I found got old after about the 20th level. The console ports are commendable in that they successfully brought the computer RTS to the TV without sacrificing too much by having to use a gamepad instead of a mouse. Kudos should also be given for the extra effort put in the graphics and exclusive features. The SEGA CD is perhaps the best of these by making full use of the extra space with additional cut-scenes and CD-Audio which do more to compel you to continue. The lack of a mouse support and slow loading times do let it down though.

While Populous hogs all of the limelight by being the first so-called God-game, I found Powermonger to be superior in a lot of ways. Attacking and overtaking villages, towns and castles were satisfying and using their extra resources to overpower the next town is rewarding. I very much recommend it, but I'd be remiss if I didn't say that other games were more cohesively designed.


To download the game, follow the link below. This custom installer exclusive to The Collection Chamber uses uses DOSBox to bring the PC version to modern systems and FS-UAE to emulate the Amiga version. The console games are emulated using Retroarch with the SNES9X_next and Genesis Plus G . XBox 360 controllers supported for the console games. Manuals included. Tested on Windows 10.

Powermonger is © Bullfrog / Electronic Arts
Review, Cover Design and Installer created by me