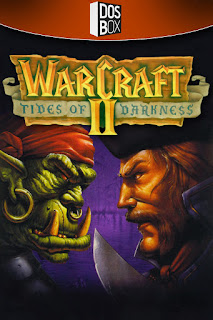 The movie may be wowing/disappointing cinemagoers (delete as applicable) in all territories now, but that hasn't stopped me getting my retro RTS kick by playing WarCraft II again. Does this once game-changing title still hold up? If you read my thoughts on the first game last week, you probably know the answer but let's talk about it anyway...

WarCraft 2 was a massively successful release back in December 1995. It garnered 90% plus review scores across the board and topped many publications best of lists from that year. Even now it regularly crops up every now and again on various best-of lists. Much like the first game, it continues to be ignored by Blizzard, yet the inferior (though still good) third entry has been made available.

On the surface, nothing has really changed. You still breed peasants or peons to collect gold and lumber as well as the new addition of oil. You still use these resources to build various structures which will better your army and when your army is good enough, you still attack the enemy. Then you win. It's all very familiar, except possibly that last part.

The truth is that when you get down to it, nothing really has changed. Instead, everything has been expanded upon or refined and the result is a game that surprisingly stands the test of time. Graphically it is gorgeous. The sprites were created by first rendering them in 3D, then given to Blizzard's talented art team to draw over. The resulting art style is one that is cartoony, bright and detailed - an aesthetic that really draws you into the world as well as the quirky humour found throughout.

In the first game, there were so few dialogue responses that hearing 'OK' on every click became annoying quickly. There's are a lot more variety here. I wouldn't be surprised if you clicked on that peon several times just to hear all he has to say. Beware, though, as one click too many will cause him to explode. Apparently, that's what happens if you abuse the hand of a god.

You can now select up to nine minions at a time, making the manipulation of larger armies less frustrating. More would've been nice but I accept that it was possibly down to the limitations of the time. There's even a larger roster of allies, each with their own set of abilities. Humans now have Elves Dwarves and Gnomes to aid them on their quest while the Orcs have recruited the support of Ogres Trolls and Goblins. Like the first game, each unit has a re-skinned doppelganger on the other side with the exception of magic users like Paladins, Mages or Death Knights whose spells differ depending on their race.

There is another nice addition in the form of sea and air units. Vehicles or sometimes creatures can explore these new terrains to scout enemy bases, uncover hidden areas or change the tactics of how you attack. Air soldiers are used in much the same way as land units but are unhindered by trees, rivers or lakes. They add little strategically but damn, do they look cool. The naval units only serve to add variety too. Attacks are again much the same as land battles with no need to change tactics because you can float. Each side can muscle up to five different types of vessels, all of which require a crew to sail. They are resource intensive too, but nevertheless are necessary to complete certain levels. Much like the air troops, they don't add much tactically but are a welcome and most importantly, fun inclusion.

In the years since its release, an official add-on named Beyond the Dark Portal was released. It added an extra campaign for each faction as well as some new and powerful heroes (named characters with special stats and abilities that can join your army). Some of the limitations such as the number of selectable units were increased for the PlayStation and Saturn release, as well as the later Windows re-release. This Battle.net edition included Blizzard's online service for multi-player. The original DOS release still features online play for two players with LAN increasing that number to eight. Lore has it that it was WarCraft 2's multiplayer that convinced Sid Meier that these modes are worthwhile. I've great memories of the Battle.net edition's multiplayer but alas the official support is no more. There is a host run by fans, but I've yet to try it and suspect it's only compatible with that version and not the original DOS game. Nevertheless, the single player campaigns are still a blast.

Everything about WarCraft 2 is a huge improvement over the original. It's so polished and refined that it makes the first game seem obsolete by comparison. The movie may have divided opinion but there's no denying that WarCraft 2: The Tides of Darkness is an absolute classic.


WarCraft 2: Tides of Darkness & Beyond the Dark Portal is © Blizzard Entertainment
Review, Cover Design and Installer created by me