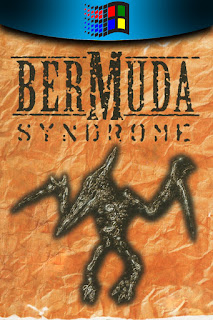 "You are Jack J. Thompson. Destiny has brought you here."

Shot down in the region of the infamous Bermuda Triangle, our hero has crash-landed into a dense tropical jungle ... and a whole heap of trouble.

It's going to take more than divine intervention to fend off attacks from restless natives and ferocious dinosaurs, save a distressed damsel from a fate worse than death ... and escape this insanity to return home.

There's no time to party. Sharp reflexes and lateral thinking are essential if Jack is to escape from this land that time doesn't even know about. This ain't no holiday resort.

~ from the back of the box
I discovered many classic games thanks to a little resource called Home of the Underdogs. It's now a shadow of what it once was at the turn of the millennium but I'll be forever grateful for introducing me to many little known Top Dogs and forgotten classics. One such hidden gem was Bermuda Syndrome - a mid-90s cinematic platformer from BMG Interactive Entertainment.

Like all good adventure stories, the game begins with a plane crash on a remote island that just so happens to be inhabited with dinosaurs. In fact, the crash decapitates a T-Rex as he was just about to chow down on a human sacrifice, a half-dressed princess of these parts named Natalia. You play as Jackm the cocky pilot to this downed warplane and with your innuendo-filled "charm", you convince her to follow you on the adventure as you slay on average one endangered or mythical creature per screen. It reminded me of King Kong or the classic 1930s and 40s serials in its simple yet exciting set up and breezy charm.

It's not exactly the most well-known of games, but it's visual style and puzzle-heavy game design kept the teenage me hooked when I first played it (along with some pixelated nudity no doubt). The pre-rendered backgrounds still look good and exude a charm few others at the time had. The sprites – whether they be your player character, humans of face-hugger rip-offs - resemble plastic toys more than anything. They are still incredibly well animated, displaying a personality and character more through movement than fidelity. Stand still too long, and our hero begins to nonchalantly puff on a cigarette. Wander too close to a dinosaur and you’ll be devoured or trampled on in no time. And this is what you’ll mostly be doing in the early portions of the game – avoid dinosaurs. These are puzzles in and of themselves and the solution isn’t always obvious. It’s best to approach through trial and error, which is not my favourite way to solve conundrums, but at least you can save at any point which helps immensely. As it’s very top heavy in this regard, with the second half seeing more direct action, I can imagine the less patient of players may give up fairly early on.


Green orbs will completely heal you (left), but that won't help against all the insta-deaths (right)

Unlike many of the cinematic platformers I've been drawn to lately, the gameplay loop is a little different. There is still the occasional maze of platforms to cross and traps to avoid much like Prince of Persia (which it does reference in one witty dialogue exchange), but these tend to be limited to their own specific area. They are the closest the game has to ‘levels’ and are accessed by placing a crystal in the stone palm of a Raptor statue. It will then zap you to a frustrating and ugly underground cave system – the most visually unappealing areas of the game – which you then have to get to the next statue to continue. These sections were probably added to puff out the length of the game, but this isn’t necessarily a bad way to do so. They offer a different challenge to the rest of the game which can be annoying as you try to find the correct route, but once you get a hold of your character's move set and click with the layout, they aren't so terrible. Just a little slow.

Outside of these areas, each screen will likely have a puzzle to solve before you can continue. They tend to focus on removing or avoiding obstacles that block your way and failure means instant death. How you solve them often reminds me of an adventure game. There are even mechanics that use verb icons and an inventory! Press TAB and a window of icons will pop up. From here, you can select an item to hold in your hand, such as a knife or crystal, or you can select one of three icons; a hand, a mouth, and Natalia. The hand interacts and will mostly be used to pick things up. The mouth talks to whoever is in front of you, though if Natalia is with you, she has her own dedicated symbol (cue some awkward flirting...). You won't get anything as complex as a full adventure game, but combined with your traditional stilted cinematic platformer tropes, it makes for quite the engrossing experience.

Combat, on the other hand, plays very differently to what you might expect. In the early stages, encounters are treated as puzzles. Shoot down a pterodactyl to occupy and distract a hungry dino; wound a tyrannosaur to draw him into the clasps of a carnivorous tentacle. That's the sort of thing you'll be dealing with, for the first half at least. The second half has you down creatures left and right with your shotgun. You may think that a gun being your main offensive weapon will remove the unpredictable nature of melee combat that blight other cinematic platformers but in truth, it just removed all tension. These encounters, which amp up half way through, end up being the easiest obstacles in the entire game. At least some enemy types try to be different, forcing you to use your firearm’s inaccurate aim function, but I did miss those intense sword fights.

That being said, Bermuda Syndrome is still a high-calibre cinematic platformer. It does enough different to set it apart from the rather small crowd and those adventuring mechanics it introduces work to its advantage. It's a shame no other game took this design philosophy and ran with it (at least not to my knowledge). Just like those shimmering crystals found on this undiscovered tropical island, Bermuda Syndrome is definitely a hidden gem. 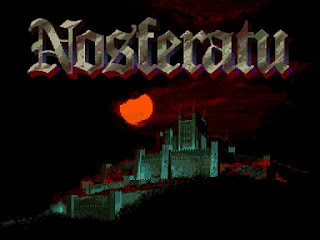 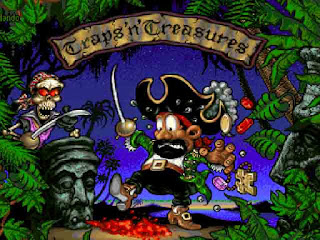 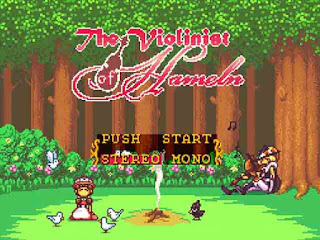