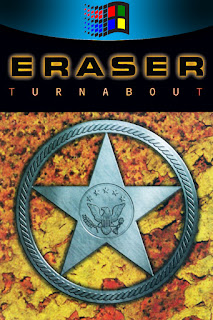 The exciting sequel to the hit movie that puts YOU into the live video action!

You are United States Marshal John Krueger - THE ERASER - assigned to protect government witnesses who testify against dangerous criminals and to stop the criminals' latest actions. Your problem is that there's a leak in the Federal Witness Security Program, and someone in your own unit is sharing critical information with the bad guys. Your objective is to identify the turncoat and discover the terrorists' next target.

The hard part is that anyone could be the mole. Your partner, your mentor, your best friend, your former girlfriend, your psychiatrist - even your newly retired boss could be setting you up.

ERASER - TURNABOUT
It's like being in the movies... and then some

Dumb action flicks were dime a dozen in the 90s, and most were an entertainingly explosive couple of hours. Naturally, any such movie with even a hint at busting blocks would be optioned for a video game tie-in. The bombastic Arnold Schwarzenegger-starring espionage actioner Eraser from Warner Bros was one such film, and Imagination Pilots, the folks behind the Blown Away tie-in, took on the task.

Released in January 1997, half a year after the film hit silver screens the previous summer, Eraser: Turnabout positioned itself as a sequel instead of a direct adaptation. By doing so, it managed to explain away the lack of expensive star power returning for the game. Ultimately, the plot is fairly inconsequential as it is pretty much the same as the move. A Witness Protection expert discovers a mole is in the ranks releasing sensitive information on their clients in hiding. Discover who that mole is, and avoid/cause a war's worth of explosions along the way.


You can freely play the action and puzzle sections using the practice menu.
In my testing, this often crashed the game even it they play fine during the main game.

For such an action-based plot, Imagination Pilots took the less obvious route of primarily being an FMV adventure. Interspersed with over-long video sequences are single-screen logic puzzles, mouse-controlled shoot-outs and explorative locations all spread over two CD-ROMs. Without any proper documentation contained within the original release, how each section operates isn't particularly explained, but for the most part, they aren't that hard to figure out. Surviving them, however, is a whole other matter.

The first gameplay segment you'll come across is a gun battle between you and numerous bad guys occupying a university campus. Move your mouse over to them and click to shoot, much like any light-gun game ported to a PC using the mouse for its operation. I found these sections insanely difficult to the point of being almost impossible. The bad guys are too small and too fast to accurately take them out with any speed, meaning you will get hit. Not only that, but there will always be multiple bad guys taking shots at any one time. It got to the point where I had to search for cheats to make any kind of progress. I believe the developers knew this too, as the cheat is fairly simple; press Ctrl-W to skip the current section. You can also access these action sequences as well as the puzzles and navigation sections individually through their own menu, though by either poor programming or emulation issues, many are inaccessible in this way crashing the game in the process.


You can take your own psych evaluation test to discover your own persona.
You can also view the results of other characters to weed out the potential mole.

Luckily, playing through the game properly has no such issues, and once you've got past the first round of warfare, the game does get a little more accessible. You will arrive at the WITSEC headquarters where you can visit several departments, though many are blocked off with a voiceover telling you that you're required to go elsewhere first. A lot of the story plays out here, and you'll notice that the full-screen FMV is of a surprisingly high quality for the time. There is little to no jitters as the video transitions from one path to another and the cast of unknowns do well, rarely dipping into the embarrassing side of cheese.

The sets are good too, and this is exemplified during the navigation sections. During the first of such sections, we're storming a house to take out any straggling bad guys. Occasionally, several arrows appear on screen to mark a fork in the road. Each arrow will take you down a different route and in some cases it could mean you come face-to-face with the barrel of a gun. You can shoot back here - the cursor will turn from a round and yellow crosshair to a red square one when you can pull the trigger, but much like the action sections, the enemy appears too quickly to survive the encounter without expecting it.


Navigating the Professor's mansion should be the highlight for adventure-game aficionados.
Playing like a randomised treasure hunt, some object ellicit clues from the mouth of the butler.

Thankfully, later navigation sections aren't so nail-biting. A trinket-filled mansion can be explored at your own pace, and only leaving the building will you get a game over. Here, you'll have to click on items to get clues on what you should click on in order. It's basically a treasure hunt, but I found it remarkably uninvolving. Perhaps the logic puzzles will fare better?

Unfortunately, they don't. If you tire of long-winded dialogue and choose to skip them, you'll have no idea what on earth you'll be doing for many of them. These can be several minutes long removing any option of self-discovery as you cannot possibly succeed unless you know what you're doing. Take the computer Security Monitor puzzle for example. It displays a load of chips that can be moved one-by-one onto three columns, though a larger chip cannot be placed on a smaller one. Essentially, it's Tower of Hanoi, but just solving it isn't the end of the puzzle. An orange-coloured chip that exists outside of the puzzle needs to be placed somewhere and by skipping the video explanation, I had no idea what to do.


Debriefing videos that play before each puzzle are imperitive to fully understand them.
If only they weren't so long and dull.

My impatience got the better of me in a lot of these puzzles. Thankfully, an archived version of the digital manual that was bundled with budget re-releases came with information not found in the original box; hints. These were invaluable for some of these puzzles, which in all honesty aren't too bad in their concept. It's just the execution that holds it back.

I found that that is the issue with the entirety of the game; its execution. Mouse-controlled shoot-outs can be a fun change of pace if programmed well. Exploring mansions and government facilities for clues is engrossing if designed well. The puzzles themselves have some unique and interesting qualities to them if only they were explained well. Unfortunately, Eraser: Turnabout, despite some interesting concepts was not programmed, designed or explained well and mores the pity.

To download the game, follow the link below. This custom installer exclusive to The Collection Chamber uses the DOSBox-X build of DOSBox running Windows '95 to bring the game to modern systems. Press Ctrl-F4 to swap CDs when prompted. Read the ChamberNotes.txt for more detailed information. Tested on Windows 10.

IMPORTANT - Remember to shut down the emulated version of Windows before exiting PCem. This could potentially result in errors, lost saves and corrupt data. Windows will automatically shut down when exiting the game. 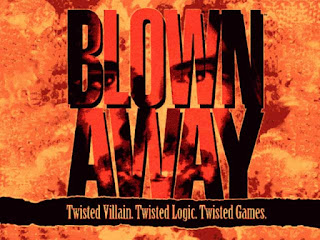 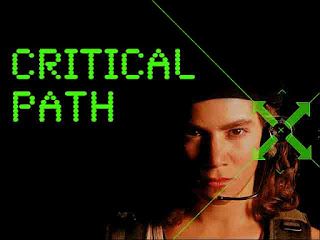 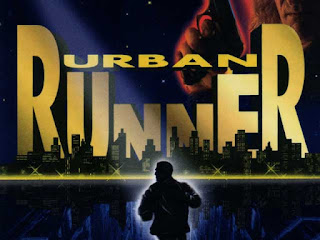