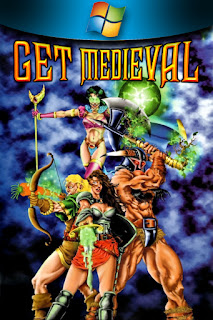 Leap into the fray with this fast, furious, and FUNNY dungeon romp. Immerse yourself in a FRENETIC action environment as you battle the evil minions of a dastardly dragon. Laugh out loud at the quips, quibbles and quirks of this slightly "off" band of adventurers. And while you may not want these characters to show up at your next dinner party, you'll forgive their ECCENTRICITIES when their diverse but effective skills get you through to the next level.

They say imitation is the sincerest form of flattery. If that's the case then Gauntlet should be bashfully fluttering their eyes at Get Medieval, Monolith's modern (or late-90's) take on the arcade classic.

Like it's 80's inspiration, Get Medieval is a top-down shooter where up to four fantasy stereotypes battle against hordes of creatures in large winding mazes. Some creatures, like the sporadically disappearing Death Hag, have obvious counterparts in the original came. In this case, the only difference with the phasing Sorceress of the original is the addition of a projectile attack. Even the playable characters have on-to-one counterparts in the original series...


Each of these characters have tons of personality, but it quickly grates. Their choice of actors seems to have come from rejects of your local improv Comedy Store. Nothing beyond the voice work has anything comedic about it. The opening cinematic would be serious were it not for the constant in-character commentary. And it appears they used the first shoddy take too. Needless to say, the humour is not exactly to my liking but I can't imagine the game without it. If they stuck to serious fantasy tropes, the game would seem a little dry which would only confound the already repetitive gameplay.

The frenetic action is also more than a little arbitrary. It's all about the level progression and high score - good for an arcade cabinet, not so good for a game released the same year as Half-Life and Grim Fandango. You can collect enough gold to make Elon Musk envious, but all that moolah means very little. Piles of the stuff is just lying on the floor, so much so that a self-imposed no-coin run is almost impossible. There's no way to spend any of it in the game, which is a shame, meaning it's only purpose is to see a number gradually rise up on the HUD.


Get Medieval (left) and Gauntlet (right). Can you tell the difference?

At the end of every fifth level you'll be met with a boss. The large sprites on these creatures do look impressive, but all of them play the same. The hulking beast will slowly trundle towards you, occasionally releasing a projectile or two as you slowly whittle down its health. This lack of variety can be assigned to the regular enemies too, all of which gather in hoards and make a beeline towards you. They will continuously spawn from their own lair until it is destroyed leaving keys or other power-ups in its wake.

The use of keys and power-ups is where the game becomes a little less mindless. The level maps are huge, requiring you to scour the maps for coloured keys or floor switches to unlock doors. After every boss, you'll be given a skeleton key which will disappear in 30 seconds. Make it to the end-of-level teleport before the time runs out and you'll gain access to a secret room full of collectibles. Most is just treasure, obviously, but you may find upgrades to your strength and armour. Other power-ups include invisibility cloaks, god mode and a fear mask that will repel all enemies for a time.

Get Medieval holds my attention in the same way Gauntlet does. They're both the same after all. I found it very entertaining in short bursts but anything longer is repetitive and tiresome. If you ever get a hankering to play the arcade classic Gauntlet, play Gauntlet. If you want better graphics and bad jokes to go with it, Get Medieval isn't a bad choice.

To download the PC game, follow the link below. This custom installer exclusive to The Collection Chamber uses dgVoodoo to run on modern systems. Help File Manual converted to PDF included. Read the ChamberNotes.txt for more detailed information. Tested on Windows 10.


Get Medieval is © Microïds & Monolith Productions Inc
Review, Cover Design and Installer created by me 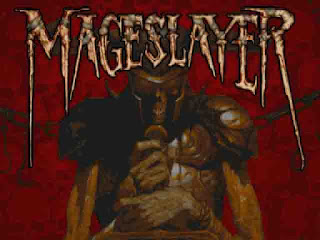 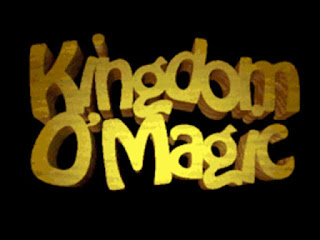 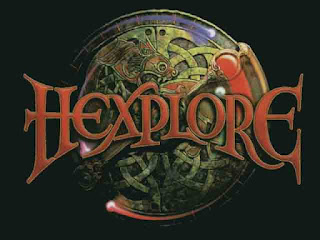