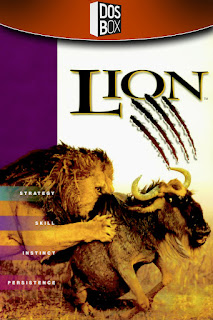 Hungry for lunch, you scan your radar view and detect a nearby herd of giraffes. Your endurance and strength ratings are low, so you'll have only one shot. You gather your pride downwind and strategically plan the attack. Kabaka drives the giraffes toward you, Umar comes in from the left and you both go in for the kill. Life is good when you're the King of Beasts ... or is it? Food and water become scarce, poachers hunt you down and predators attack your pride. Do you have what it takes to survive in this incredibly realistic wildlife simulation?
Experience the ferocious power of Lion today! Where else can you be rewarded for your animal behavior.

~ from the back of the box
Edutainment games are not known to have deep, rich gameplay. Most go the easy route of simple mini-games but on occasion you get something special. Released in 1995 amid the hype of Disney's The Lion King, Lion not only taught you about the day-to-day lives of the Savannah's big cats, but also allowed you to be one.

The strategic life simulation found in Lion is quite robust. You can control an individual lion or lioness as they eat, hunt and fornicate to survive. You'll have to keep an eye on the feline's hunger and thirst levels, their stamina and their overall health as well as those under their protection such as cubs or other members of the pride.

It's not as easy as it sounds, as astute knowledge of lion behaviours are needed to successfully perform some of the tasks. Thankfully, the CD-ROM includes a slew of documentary footage and encyclopaedic text to research. Each lion also has their own stats that affect personality as well as their abilities. Some are afraid of ostriches as one repeatedly pecked them as a cub. Others prefer to hunt big game as opposed to birds or smaller creatures. Some are almost perpetually in heat. Perhaps now you can attract a mate in the wilds of the plains.


A comprehensive encyclopaedia is included to teach you all about the life of a lion.

As is the nature of most life sims, the game plays rather slowly. A lot of the time is spent watching your lion sleep in the shade of a tree, sit waiting for something to happen or meander towards the nearest food source. I'd advise against running as you'll need that stamina to catch the wildebeest or zebra which is more difficult than it looks. This is where the game ultimately lost me. I got tired waiting for my stamina to rise to I could fail catching that giraffe. I got bored waiting for that specimen of a lion to mate with me. I got frustrated when the wind changed and my scent scared off a heard of elephants. I was horrified when a poacher shot me in the face.

Ultimately, I found Lion to be rather dull, despite how impressively realistic the game's mechanics were. How much enjoyment you get from playing it depends solely on how much you love lions. And given how huge a certain mid-90's Disney film was, that should be a large chunk of you.

To download the game, follow the link below. This custom installer exclusive to The Collection Chamber uses the DOSBox-X build of DOSBox to bring the game to modern systems. Manual & Referance Card included. Read the ChamberNotes.txt for more detailed information. Tested on Windows 10.


Lion is © Sanctuary Woods
Review, Cover Design and Installer created by me 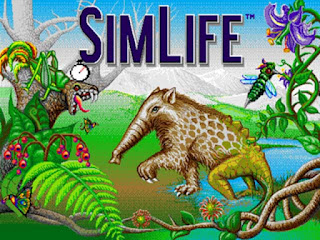 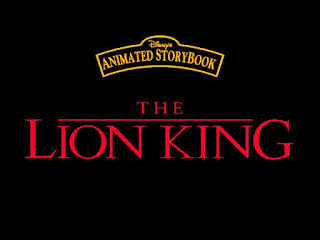 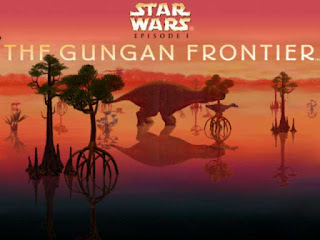