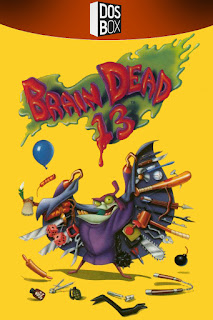 It's October, the month where goth and gore become acceptable to the god-fearing suburbs around the world. Pasty skinned weirdos like me need no excuse to encourage the claret at any time of the year, but in the spirit of my favourite month, we're going all spooky on yo' ass. Let's ease into Halloween with something a little tame: an animated arcade adventure from 1995 named Brain Dead 13.

Don Bluth has a lot to answer for. His movies may be hit and miss, often showcasing their technical prowess over artistic merit (unless Spielberg happens to be involved). Back in the 80s he unleashed Dragon's Lair into the arcades, and it was a huge success - for about 5 minutes. Brain Dead 13 is exactly like these games, just taking place in a generic horror setting instead of a generic fantasy one (for generic sci-fi, see Space Ace).

You are Lance, a 90s stoner cliche complete with backwards baseball cap. You also happen to be a bit of a computer wiz working for an on-call for a technology company that operates like a plumber of silicon. Little does he know that his new client is actually the floating disembodied brain of Dr. Nero Neurosis who plans to take over the world. And you've just fixed his supercomputer so he can do so.

Realising the predicament that our hero is in (or does he, the cartoon caricature makes it hard to tell), Lance speeds off stumbling into a series of events that somehow ends up stopping Dr. Nero's nefarious ways, as well as dispatching all of the ghouls residing in his spooky mansion. His insane hunchback assistant named Fritz who sports hooks for hands unerringly gives chase. Hilarity ensues, but that doesn't necessarily translate as entertainment.

I have a love/hate relationship with these types of games. They all have a tendency to look gorgeous with some beautiful animations. The help of a movie animation studio helps. Developers ReadySoft, without the input of Don Bluth this time round, have crafted what I feel to be a better visual design, giving it a bouncy 90s spin reminiscent of that era. The only problem is with the gameplay - there is none.

Progressing through Brain Dead 13 is a chore. An animated clip plays, you press a button (here it's one of the arrow keys or the space bar) and you watch another clip. The only way to know if you pressed correctly is if the following scene is not one of the large variety of inventive death scene. The inventiveness stops there because that's it. There's no on-screen clue to guide you to the correct input, nor is there much indication of when to press a button. It's absolutely intolerable, but then every Dragon's Lair or Space Ace was exactly like this.

The real fun is in the inventive scenes unfolding. You'll encounter witches, demons as well as an overtly sexualised vampire, complete with barely covered bouncing bosoms. The fast-paced humour snaps along quite nicely too, it's just a pity that the stress of the button tap stops you from enjoying it all. Some animations also repeat fairly often. It may take some skill to fit the 40 odd minutes of high-quality animation on a single CD, but traipsing through the exact same witch encounter lessens how impressive it is. The only difference is a colour swap and a mirrored image. It's rather poor considering most of the other scenes are fairly unique - more-so that Dragon's Lair even.

You know whether or not you're going to like this game before you play it. If you're a fan of Don Bluth's attempt at interactive storytelling then you'll love it. I'm a sucker for some good animation, but sadly I've lost my patience with a game such as this. I'd just prefer to watch a Let's Play on YouTube.

To download the game, follow the link below. This custom installer exclusive to The Collection Chamber uses DOSBox to bring the game to modern systems. Tested on Windows 7.


Brain Dead 13 is © ReadySoft
Review, Cover Design and Installer created by me