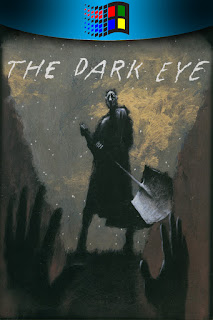 The works of Edgar Allen Poe has never really been translated successfully to other mediums. While the series of films directed by Roger Corman were pretty good, they are questionable as adaptations. The skin-crawling psychological horror missing in those 60s B-movies are here in full force with The Dark Eye, a 1995 adventure by Inscape.

A lot can be said about the history of horror in gaming, but one thing that seems to be universal is that the monstrous jump scare is primarily used to incite fear in the player. Even the more subtle of survival horrors rarely delves deeper than what's lurking in the darkness. The Dark Eye, thanks in part to the rich source material, is not like this. Although the wraparound story is a heavily fictionalised biographical account of Poe's life, the main bulk re-tells three of Poe's stories in adventure form; The Cask of Amontillado, The Tell-Tale Heart and Berenice. It also takes the time to recite some of his more famous prose and poems in some beautifully realised hidden scenes.

The graphics are mostly rendered in some freakish stop-motion (although some may argue the use of marionettes), their expressionless faces adding to the otherworldly feel. You go through each tale twice, once as the villain and again as the victim, changing characters at by gazing into the eyes of your antagonist. Much like the internal monologues that are very much a part of Poe's prose, you are forced into the shoes of a killer and the paranoid consequences of it. These thoughts attempt to rationalise the nasty things you are about to do. Then you transfer into the consciousness of the victim, witnessing every moment, every panicked thought as you are buried alive or worse. The horror is not caused by monsters in the literal sense but in the mental.

As a game, the interaction is very minimal. There are very few moments that could even be considered as puzzles. Instead, The Dark Eye perhaps most closely resembles an interactive media disc that was very common in the early years of CD-Rom. Whether or not this is a bad thing all depends on the player and his expectations, but I found it to be completely absorbing and well put together. The linear story and lack of difficulty did not put me off as the experience is one that is so rare in video games - scary in a hugely intelligent in a downright disturbing way.

The game could easily have been a simple interactive re-telling of Poe's work, but it distinguishes itself by going deeper into the human subconscious than original stories. Here each tales has more than one narrator, with a far greater emphasis on the victim's point of view. It even touches on Poe's fascination with the popular 19th-century pseudo-science of phrenology. It was a theory that once thought the brain was separated into emotional states such as friendship and secretiveness. The shape of your head was even considered to be a mark of your personality. Naturally, it's now been debunked. In the game, the progress menu depicts that of a phrenological brain, separated into sections. Each story segment relates to one of the sections, with the brain completing at the same time as the game.

The voice work is also well done. Casting the famed author William S. Burroughs in selected scenes adds a gravitas few could give. The only downside is that his slurred speech is often intelligible, making it difficult to take in his recitation of Annabel Lee or The Masque of the Red Death. The character of Uncle Edwin uses his iconic speech patterns to its advantage. He does not appear in any of Poe's work and only features during the wraparound story. It may not be Poe's work, but it is definitely in keeping with his style, and it's unfamiliar plot genuinely took me by surprise on my first playthrough.

Certain elements of this tale are taken directly from Poe's own life. His wife, Virginia, suffered from consumption which first became apparent which she sang to him as he played the piano. This is directly referenced in the character of Elise who suffers the same fate, though later events are entirely made up.

I often feel the need to return to The Dark Eye like I occasionally do with Poe's written work, though the ease of playing it on modern systems has declined drastically in recent years. Thankfully it is very playable when emulated in DOSBox running Windows 3.1. It still holds up fantastically since I last played it about 10 years ago. Revisiting it was a creepy joy and without a doubt, it's the best adaptation of any of Poe's work.


The Dark Eye is © Inscape
Review, Cover Design and Installer created by me