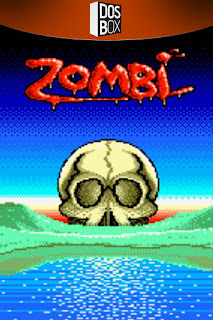 One is the Nintendo Wii-U's most interesting launch titles may find more recognition now that it's out on more popular systems, but did you know that Zombi-U was part of a franchise that spans almost 30 years? In keeping with the horror theme of the month, we're taking a look at the first game from little-known developer Ubi Soft.

Zombi goes right the way back to 1986 when it was released for the Amstrad CPC in France. It was originally based on the classic George Romero movie Dawn of the Dead, which was renamed Zombi in parts of Europe, but rights issues meant they couldn't take too much from the film itself - apart from the name that is.

You take control of four survivors who are in desperate need of some gasoline to fuel their helicopter. Luckily they had enough fumes remaining to land on the roof of a shopping mall where they hope to find supplies. Naturally, it's infested with zombies, but they pose little threat for the majority of the game, which is mostly an inventory-based adventure with minimal RPG and action elements.

You view the game in the first person, moving around the eerily silent consumer haven by pointing and clicking on the on-screen directional arrows. Occasionally a zombie will come shuffling in front of you but you can easily walk past them. Don't linger on the same screen too long, though, or they will get wise to your presence and attack. If you do die, that's it. Your character is dead for the rest of the game and you may need to actually fight their reanimated corpse to claim their inventory. This was one of the selling points for the 2012 sequel, and it's interesting how unique this idea still is despite being 30 years old.

The original Amstrad CPC version featured mostly black and white graphics with splashes of coloured highlights to indicate what you can interact with. Four years later, after finding great success in their native country, it was expanded to other systems and territories, including the PC, Atari ST and Amiga. The CPC game is still impressive considering the technical limitation of the system, but it shows its age compared to some of the ports. I found little improvement in the PC version, with simple colourless graphics, no support for sound cards and a convoluted keyboard-only control scheme. The Atari ST and Amiga versions (of which the latter is included) are perhaps the definitive versions, perhaps being better defined as remakes rather than ports. The graphics make great use of the 16-bit colour pallet, with improved sound (though still sparse) and a mouse control scheme. The interface has also been improved, streamlining the many icons that would bog down the original making it far more intuitive.

What may stumble most players is not the mechanics of the game, but the lack of any direction. It may only take about 20 minutes to complete if you know what you're doing, but it could easily be four times that for newcomers. With no guide or visual clues to point you in the right direction, progression will often come down to trial and error leaving you wondering around the hallways for many in-game hours like one of the zombies you're continually avoiding. As soon as you get into a stride, you notice that there's a time limit to complete the game and it's now nighttime. Then, before you figure out where the flashlight is so you can see, the time's up and you're dead. For a lot of other games of this kind of mechanic would become annoying fast (Dead Rising, I'm looking at you), but it didn't so here. There's no text, conversations or artificial bloat to hinder any replay so it's easy to simply head straight to where you now know the flashlight is and continue.

For a horror game, it's not particularly scary. The zombies pose little threat as they shuffle around aimlessly, but that's not really the point of this game. I loved how all of the game-play elements combined into an adventure that's coherent, fun and fresh among retro titles - something that can't be said for most other games hitting 30.

To download the game, follow the link below. This custom installer exclusive to The Collection Chamber uses DOSBox to bring the PC game to modern systems and FS-UAE to emulate the Amiga version. Manuals included. Original French manual translated by me. Tested on Windows 7.