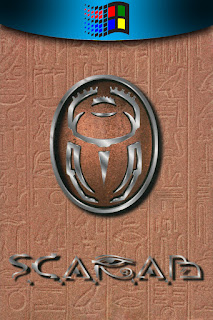 There are two sides in the game, with a maximum of three mechs per team. Gameplay is controlled in the first-person in an entirely polygonal game world which looked quite impressive in 1997, but even those with a high tolerance for mid-nineties 3D will find the visuals simplistic and sparse. The maps or cities are maze-like in their design with winding pathways suspended in mid-air to tunnels that only serve to disorientate. The game demands you to know every inch of the map and to utilise every strategic placement.

So far this all sounds very much like a multiplayer focused FPS, but in reality that is not the case at all. While you can win by destroying all of the enemy mechs, the preferred method is to place towers around the city claiming the land within its radius. Cover the whole city with no enemy towers and you win. Needless to say taking the gung-ho approach of Quake is a sure way to die quickly. More so than any similar game of the era, S.C.A.R.A.B. requires strategy. At the beginning of each match, you are given a short amount of safe time to collect power-ups and familiarise yourself with the surroundings. The problem here is that you are given no pointers in how to play. Even the manual and its help-file equivalent give little away. To get to grips with the game and its many, many intricacies you will need to put aside a hell of a lot of time so you can figure it out. And you'll die constantly during this time.

I gave up on S.C.A.R.A.B. after too many hours of excruciating play. You can only see the game-over screen so many times before it completely demoralises you. If you are a better at such games than I am, or have the patience to actually get good, I can imagine that it could be very rewarding. It will either click with you or not and unfortunately, I couldn't get to grips with it.


To download the game, follow the link below. This is a custom installer exclusive to The Collection Chamber will run natively on modern systems. Tested on Windows 7 and Windows 10.


S.C.A.R.A.B. is © Electronic Arts
Review, Cover Design and Installer created by me