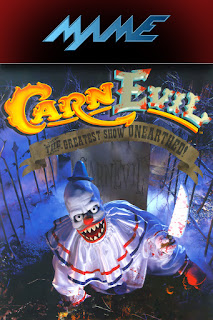 October is upon us so get ready for a hoard of frothing gaming goodness escaping from the darkest depths of the Chamber. The first to maul its way out is Midway's 1998 arcade gem, CarnEvil, a horror-themed light gun shooter that's sadly never had an official home conversion.

I don't know what's happened to light gun games. It's been some years since anything has been good enough to dust off that plastic facsimile of a firearm and let rip. Is it due to the ever-declining arcade culture, the over-saturated influx of first-person-shooters or simply because of the technical difficulties to get them working on modern flat-screen TVs? Who knows? All I know is that I recently came upon CarnEvil and became overwhelmed with a nostalgia I never thought I had.

If you haven't heard of this handsome looking game I don't blame you. Despite being Midway's most successful on-rails shooter at the time (as well as their most expensive), they never thought to bring it to the home market. This being 1998, it wouldn't have been too much of a financial risk either. The DreamCast had just been released and was considered the de-facto console for arcade conversions, but the original PlayStation was no slouch either. Both had more than competent peripherals to take advantage of too. If I were to hazard a guess, I would say SEGA's The House of the Dead scared them off, or they put it off for too long that the game began to look dated as a result.

Considering the horror theme, any comparisons to SEGA's classic zombie series are to be expected. When you compare them side-by-side, however, CarnEvil does come up a tad short. While House takes advantage of the fully rendered 3D world by including some branching paths, CarnEvil with its pre-rendered CGI, sticks you on a very linear route. The upside is that more polygons can be reserved for the enemies themselves, while still having a stylised and detailed environment. Whether it be demonic elves, giant murderous babies or harmless mimes, each of CarnEvil's enemies are striking and original, possessing far more personality and genuine humour than its competition.

The game itself is actually structured very well too, even if it is a little short. From the outset, you can choose between three different levels; Haunted House, Rickety Town and Freak Show. The first area, like House of the Dead, is filled with zombies groaning around a haunted mansion. There's even a girl that you can save at various points too. Named Betty, this hazard-prone blonde is the only civilian in the game, and saving her does nothing other than increase your score. At least the townsfolk in House give you extra lives or lead you to separate routes.

Rickety Town is a Christmas themed funfair, complete with rides and restaurants that break every health code possible. Demonic elves scatter the area leading to a showdown with Krampus himself. Occasionally there'll be power-ups floating around, often in very inconvenient places. They range from an increase in ammo to machine guns and flame throwers. Perhaps the most interesting is the acid bath gun which will melt your enemies in one satisfying and gory hit.

The Freak Show level contains perhaps the most disturbing and inventive enemies in the game. For starters all of the carnival's mimes congregate here. If that's not disturbing enough the final boss is a giant baby stomping around his field-sized playpen like Godzilla in Toys R Us. Named Junior, this monstrosity is unnaturally accurate with his vomit projectiles too. In some arcades, this boss was seen as too taboo for their audience (yet ripping spines out in Mortal Kombat was strangely okay). Midway got around this by including an option at startup to change the baby into a demonic teddy bear named Deaddy.

Once you've survived all three of these areas it's off to the final section which takes elements from all three and places them in a giant Big Top circus tent. It all culminates in an exciting final encounter with the carnival's curator. I won't go into details as playing it is a visceral joy that only these types of games can give. If The House of the Dead ran a little too far with its B-movie inspiration, CarnEvil has far more focus to its overall presentation. The Burtonesque visuals and black humour make the whole package one of the best of its kind. It may not have the same replay value that makes SEGA's franchise such a classic, but there's no doubt that it's an incredibly fun ride while it lasts.

To download the game, follow the link below. This custom installer exclusive to The Collection Chamber uses M.A.M.E. to emulate the games on modern PCs. Mouse and Xbox 360 controllers supported. Tested on Windows 10.
09.10.2016 - Version 2 - Fixed installer


CarnEvil is © Midway Games Inc
Review, Cover Design and Installer created by me 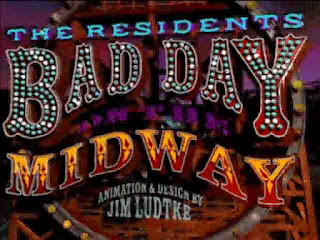