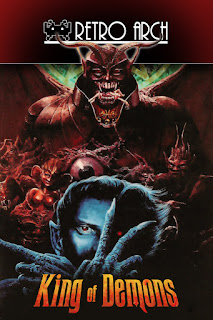 The Super Nintendo - or indeed any Nintendo console - isn't exactly known to bring on the scares. Sure Castlevania was a thing but it was hardly a nightmare-inducing experience. To get a more petrifying play, you have to look to Japan who actually had a fair few titles for an older audience, much more than the West that's for sure. The King of Demons (known natively as Majyuuou) is one of them. And you can play it in English too thanks to a fan-made translation by Aeon Genesis.

Even without the translation, you could still have a hell of a lot of fun with this KSS developed action platformer. When I first came upon it on an emulation site many years before the translation, I understood the plot as simply "save girl from evil thing". That's basically it, but now I can fill in the blanks. You play as Abel, a regular blue-jean wearing guy who's supposed best friend Bayer has kidnapped his wife, Maria, and daughter, Iria, The reason; to sacrifice them and summon forth Lucifer himself. He even took the family cat! You think you know a guy.

The game begins at the gates of hell where the old friends feud for a bit. Once Bayer has taken enough of a beating, your wife sacrifices herself so you can enter hell to save Ilia and stop Lucifer from destroying Earth. Maria will be by your side as you begin but in the form of a fairy type creature. She actually has a use too, acting like a helper bot seen in shooters like R-Type or Wizball. Firing your weapon will also send her zooming across the screen towards the nearest enemy. She also gives you an extra hit which is nice, but it also comes with a caveat. Once she's gone she's gone. She will be consigned to the depths of hell for eternity. No pressure then. You can find other helpers along the way, but they are rare and sadly not your wife.

Maria's selfless act is not the only otherworldly help you'll get. The deeper you go, end of level bosses will drop coloured orbs which will transform you into a more formidable creature. A red orb will turn you in to what's known as a Hybrid, a half-human, half-harpy demon. Touching the green orb will give you the powers of a Centurian, a hellspawn that makes little work of tougher enemies with its laser projectile. The blue orb imbues you with the abilities of the Azure Dragon so that's naturally the best by default. A hidden fourth transformation can be found if your good enough, but I'll leave that as a surprise (read: "I wasn't good enough to get it").

Many critics have described the game as being Castlevania meets Contra. I get where they're coming from but personally, I have to disagree. Your main weapon may be a gun, but it's not nearly as gun-toting or bullet crazy as Contra's. It's definitely on the macabre side, but it's far, far gorier than Konami's classic series. It makes Belmont's saga look like child's play by comparison. In fact in terms of tone, I found it more in keeping with the PS3 game God of War, or more specifically one of its clones by the name of Dante's Inferno. Nods to the underworld and tortured souls are found in each of the game's seven levels, be it winged demons, hanging corpses or zombies which need to be decapitated before you defeat them. There's also a larger focus on well-designed boss fights, which will more often than not tower above you filling up most of the screen. It's definitely a game that takes pride in spectacle.

Mechanically it's a fairly traditional run-n-gun platformer for the most part with some tight controls. The stages are designed around each form's abilities with one particularly fun level playing like a cross between a shoot-em-up and a platformer. It has the same high-octane thrills as the former, but also requires the more thoughtful gameplay of the latter. If you want to give yourself a challenge, you can jump over the transformation orbs to complete the entire game as a human. Enemies take more hits as you progress as well as the levels themselves being far more devious so it's not a good idea for beginners. There's no benefit to this though as none of the game's three endings makes mention of this route. Also, why would you when you can be a dragon?

The graphics are perhaps a bit of a mixed bag in some areas, especially when you consider it was released late in the system's lifecycle in the summer of 1995. The backgrounds are simply stunning, each area filled with nice details and gorgeous pixel art. Many of the bosses are huge and certainly take advantage of the fine art team KSS has assembled. The sprites for the regular enemies, however, do suffer. Their small, indistinct design does arguably take away from their bloody nature lessening the impact of what would otherwise be a disturbing encounter. Abel himself is also small which does gives a sense of scale to each location, but it again reduces detail leaving him looking rather generic in his human form. On the plus side, everything is animated fluidly making Abel's surprisingly agile move set fun to perform.

The King of Demons is a fine game, so much so that it has become one of the most sought after Japanese imports for the system. Prices for a complete in box copy can rival many RPG releases in the West. That's not without reason. The King of Demons is a stand-out game for the system and not only for its theme. It's fun to play from beginning to end with just enough challenge to keep you playing. Also dragons.

To download the game, follow the link below. This custom installer exclusive to The Collection Chamber uses Retroarch with the SNES9x_Next core to emulate these games on PCs. Xbox 360 controllers supported. Tested on Windows 10.


The King of Demons (Majyuuou) is © KSS
Review, Cover Design and Installer created by me 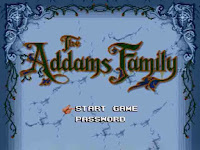