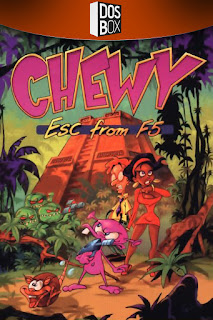 The evil green Borx are taking over the galaxy! Can Chewy and his pal Clint steal the plot device to save their world? Evidently not, as Clint is sucked into a wormhole and Chewy is captured by those slimy creatures. We're back in Point & Click adventure gaming territory with BlueBytes' 1995 game Chewy: ESC from F5...

If you've played the classic LucasArts game Day of the Tentacle, you'll certainly get a sense of déjà vu. The visual style is just off-kilter enough to take the juvenile edge off the cartoon look.  It's a look that's very reminiscent of that all-time classic. While the style sings, it's pixellated sour notes makes the game appear to be older than it actually is. Germany first got their hands on it in 1995, a full two years after DOTT, yet any innovations made in the intervening years are not found here. When us English speakers were able to give it a spin, it wouldn't be until 1997 - a year in which LucasArts were heralding the sublime The Curse of Monkey Island. The differences between Chewy and its peers were huge.

As such the game sold very poorly. I could also add that the perceived decline in the genre's sales worried BlueByte who only ordered a limited run (they didn't even spend the money to include a printed manual). It is now something of a collector's item yet, like the similarly ignored The Neverhood, the prices it command isn't wholly unfounded.

If you were going to compare a game to one of the best and most revered of its kind, make sure the comparison is favourable. Chewy: ESC from F5 does just that. The visuals may be under par and the mechanics may be standard adventure fare, but it holds within some incredibly funny and charming moments.

When you first take control of Chewy, he is locked in a grimy prison aboard the Borx's spaceship (which bears a striking resemblance to the Death Star). You have to use your wits, and a green viscous goo, to escape. The puzzles, while fairly easy, use a twisted logic that will surely make you smile. There won't be long periods of wondering what to do next, but it makes for a fun romp. If you do get stuck, you'll always find clues in the cleverly scripted dialogue between characters.

Chewy would be a welcome addition to anyone's collection. If you're looking for a classic LucasArts style adventure, then this will definitely please you. It's not quite up there in quality or polish but this lovable pink alien filled a hole left by Day of the Tentacle quite nicely.

To download the game, follow the link below. This custom installer exclusive to The Collection Chamber uses DOSBox to bring the game to modern systems. Manual included. Tested on Windows 10.
14.09.2019 Ver.2 -  Changed fullscreen resolution to suit all desktops


Chewy: ESC from F5 is © BlueByte
Review, Cover Design and Installer created by me