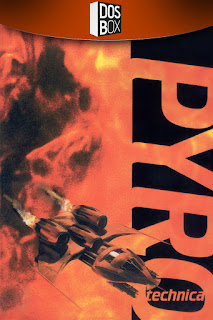 Pyrotechnica, created by Colin Parrott, was released by Psygnosis in 1995, only a few months after Descent. But the release is not the only thing the two games share...

Both games have a disorientating 360-degree mechanic where you can traverse the level from whatever angle you choose. Your vehicle in each game is a space ship in which you attempt to navigate the maze-like corridors of indoor structures. They also mix the mechanics of a first-person shooter and a dogfight filled flight simulator.

That may be enough to scream copycat but that is where the similarity ends. Pyrotechnica is very much the budget game compared to the blockbuster that was Descent. The levels rely on a simple graphical style with limited textures which, while easier to design, looks spectacularly minimalistic. This was many years before Rez took this style to the nth degree.

The look may cleverly hide its low budget, there are other tell-tale signs throughout its presentation. The most damaging is the control scheme which is completely unintuitive and awkward. Better Q.A. testing would've ironed out these kinks but in 1995 a convoluted key layout war par of the course. I found myself constantly trying to remember which key does what and in the heat of an attack while upside down this is not ideal.

You'll constantly need to refer to the manual for these controls, but there isn't one. The only documentation the game has is a text file on the CD (a budgetary constraint?). It is a must-read before play, but just to give you an idea, here are the controls:

This is a simple arcade game that consists of little more than go from A to B and shoot everything that moves. What is highly frustrating is that it could be highly enjoyable if it was a little more streamlined. I know this was not that unusual for time period but in all honest, PC joypads couldn't come quickly enough.

Another gripe about the game is that you start each level at full speed, often hurtling towards a wall. This design choice may be there to give a sense of the fast-paced arcade nature of its game-play, but it only leaves you fumbling for the "0" key before you crash. There is a health and shield bar, but even playing on the easiest difficulty setting it will diminish quite quickly.

These gripes overall ruined my experience of a game that I was genuinely interested in. The look remains somewhat unique and the promise of an arcade action experience was something I was hoping to enjoy. Ultimately I gave up on it disappointingly early on after only a couple of short levels. Hopefully, you'll get more enjoyment out of it.

To download the game, follow the link below. This custom installer exclusive to The Collection Chamber uses DOSBox to bring the game to modern systems. Text manual included. Tested on Windows 10.
14.03.2019 - Ver.2 - Changed fullscreen resolution to suit all desktops

Pyrotechnica is © Psygnosis
Review, Cover Design and Installer created by me