Episode 9 was where I began my X-Files journey. "Space" may not have been the best the show has to offer, and it is often considered amongst the worst, but I have a soft spot for it. It proved to that this wasn't just another American detective show but something that incorporates horror and science-fiction in an intelligent and exciting way - something that the advert was not so successful at. 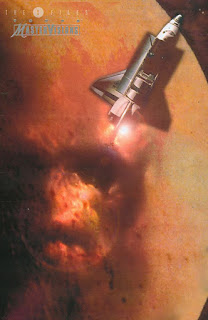 Although I do have a fondness for this tale of space ghosts and faces on Mars, I have to admit that its flaws are hard to ignore. It is one of the few episodes that has dated with some truly terrible special effects and the story is filled with inconsistencies and plot holes, but I admire the ambition.

Looking behind the scenes at NASA truly captured my imagination but seems rather quaint after Apollo 13 was released a few years later. Mulder and Scully are called in to investigate apparent sabotage on a space program that involves Mulder's childhood hero, astronaut Colonel Marcus Aurelius Belt.

There are some tense scenes that mimic Apollo 13 in NASA's Mission Control room when a crew are almost stranded in space due to a sabotage. It is discovered that this along with other malfunctions could not be done by man as the extreme temperatures needed to even dent the metal used make it impossible. I found the supernatural mystery to be far less interesting than NASA and the space mission itself, which does go some way in explaining why this Chris Carter penned episode is considered the black sheep of the bunch. 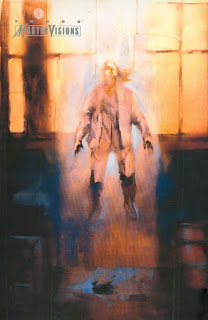 The blip in quality that was Space wouldn't last. Fallen Angel cemented my love of the show and I was in awe of the theories and conspiracies contained within. I started buying a magazine called Alien Encounter and found the stories fascinating.

This episode has Mulder going rogue, ignoring jurisdiction by entering a fenced off woodland area where he believes a UFO crashed. Scully follows to make sure his extra-curricula activities don't get him into trouble. While in the area the duo meet Max Fenig, an alien abductee obsessed with aliens - a parallel to Mulder's own psyche that doesn't sit well with him.

Personally I find stories of alien abduction to be the imaginations of bored attention seeking minds or the illusions of those who are not all there. That doesn't stop me from being completely pulled into to their tales often from a psychological point of view. Where the X-Files shines is that both opinions are presented. Max Fenig is portrayed as something of a whack job with a cabinet full of medication for mental disorders. It also portrays him as complex and sympathetic and ultimately a hero.

All Alien Encounter had was a couple of straight faced farmers from Norfolk pointing to spider bites on their arm as if it were proof of the existence aliens. 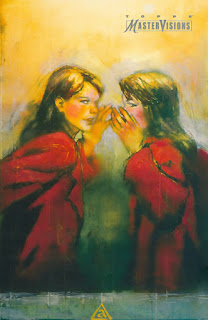 I don't know why, but this episode stuck with me long after it aired. Due to the nature of TV at the time, I wouldn't see it again until it was repeated many years later but this story of clones remained an indelible memory.

Two fathers on different sides of the country dies in a very unique way at the exact same time. When our agents investigate they are shocked to find that the daughters of each victim look exactly the same. Both girls have extremely high intelligence and psychopathic tendencies. Throw in a disturbing psychic connection and these seemingly sweet girls become scary and dangerous monsters.

Their investigation leads to Dr. Sally Kendrick, a disgraced doctor who experimented on patients who came to her for IVF treatment. She successfully implanted genetically modified clones of herself into the mothers which resulted in the homicidal offspring.

Eve is one of the highlights of The X-Files' first season. It's a thought provoking thriller that feature films would be jealous of. 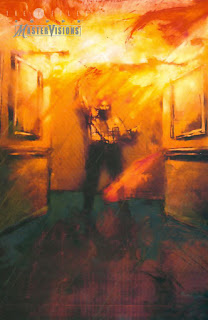 We've tackled psychokinesis on the show so it only a matter of time before pyrokinesis becomes the focus of an episode. Surprising this ability is rarely attributed to real life by paranormal theorists, instead offering up spontaneous combustion as an answer. Pyrokinesis remains solely in the realm of fiction and comic books.

Fire is one of the broader episodes of the first season. The villain, Cecil L'ively is a contract killer with penchant for altering dialects and burning his targets with a fire controlled by his mind. His villainous character wouldn't be out of place in a superhero comic book, nor would the impressively bombastic finale. This doesn't mean the episode is bad - it's a welcome change from the conspiracies and intellectual postering that came before.

Mulder is brought onto the case by a former Oxford classmate and one-time girlfriend Phoebe Green. The stereotypical Brit and Scotland Yard inspector adds a backstory to Mulder that doesn't sit well with me. It almost delves into soap opera levels of forced drama between the two. Thank goodness she's not a recurring character, never to be mentioned again.


The X-Files was definitely hitting its stride early with confident stories that excel over 20 years later. I fully expect some of these ideas to come back in feature-length form in a similar way that Twilight Zone episodes inspired many Hollywood movies.