Season 1's second disc on the DVD set continues to expand the show beyond it's initial alien premise. It even contains one of the best and well loved episodes of the entire series that is scarily plausible. 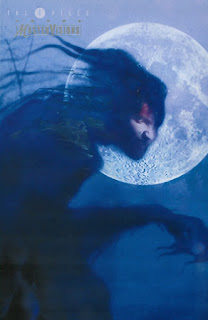 The Jersey Devil, written by series creator Chris Carter based its story on local folklore while adding in elements of feral humans where children are supposedly raised by animals. Killings in the Jersey area bring our agents to the case which sees the victims eaten by a couple of wild creatures forced away from their forest home by loggers.

While this wasn't one of my favourite episodes, I did like it but found it mostly forgettable. Seeing it again and I feel similarly indifferent to it. It contains some great chase scenes with a semi-naked wild woman and the environmental theme is thought provoking, even if a later episode in the series with deforestation theme is far more effective.

What I found bizarre is that they tried to give Mulder a sexual tension towards the female 'devil'. It seemed a bit out of place in the mid-nineties and it does even more so in retrospect. We have all grown to know Mulder over the nine seasons and two feature films. We know of his proclivities towards porn, which is often played for laughs but it shows his single-minded devotion to his supernatural beliefs that is lonely for him. Giving him an attraction to the creature here seems at odds with his overall personality which was still being developed at the time.

With elements taken from myths such as Bigfoot, the Jersey Devil and the Wolfboy of France, the inspiration behind the story is more interesting than the episode itself. 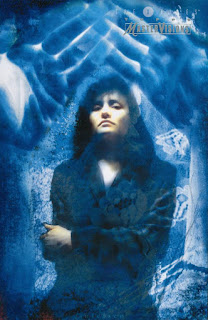 I've always been fascinated with ghost stories. The first true horror movie I ever saw (because Gremlins doesn't count) was Poltergeist 2. It may not have been the best in the series but it opened my eyes to the horror movie genre of which my favourites would be ghost stories like The Innocents and The Haunting.

With this in mind, I really loved Shadows when I first saw it. The show was still passing me by on it's first run so by the time I had seen it I had read all of the companion books, downloaded the low-res Quicktime TV spots on the now sadly defunct X-Files homepage (how times have changed). It was also written by Glenn Morgan and James Wong, who would go on to write some of my favourite episodes. I liked this episode so much that I even stole the character name of Kyte for my own (bad) short horror stories.

Watching again, I found it to be disappointing. The story about corporate espionage and revenge now feels tired and it has surprising dated far more than other episodes. Being the X-Files it is not all bad. The idea of ghost-photography is a fascinating one and seeing some real-life images is guaranteed to give me sleepless nights. 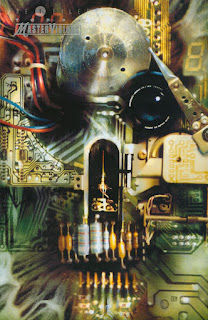 There were very few true ghosts in the X-Files lore. I had an interview with Chris Carter back in the day that the reason for this is that there wasn't much that could be done with them. I wholly disagree.Ghost in the Machine disappointed me when I was younger because it wasn't really about ghosts (the nod to the Latin phrase Deus ex Machina was also lost on me).

A high-tech highrise that is the home of the fortune 500 company Eurisko. Everything about this building is controlled by a computer intelligence created by super-genius Brad Wilczek played by Rob Labelle who you may recognise from Watchmen and the 4400. When bugs results in the computer potentially being shut down, the AI goes on the defense using its total control to kill those who are a danger to it.

The lack of a real ghost did disappoint me when I was younger, but I enjoyed far more now. Some of the elements reminded me of Poltergeist 3 (the one set in the skyscraper) but this was far scarier. The ideas of what AI future tech could do in 1994 does seem a bit quaint now. In our ever increasing technological world, it remains prescient. I would love to see an update of this story with current mobile phones with Siri and Cortana. They're scary enough as it is! 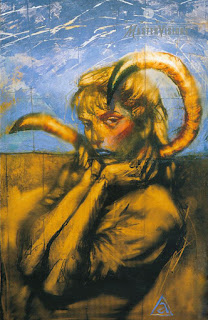 Now here's the one I was desperately waiting to see. I wouldn't join the show until an episode later so the popularity of this episode only served it to grew in my mind to almost legendary status. When I finally saw it on a repeat a few years later it didn't disappoint. Even now it is cited as one of the best the series has to offer. Seeing it again, it reminded me why I loved the show so much and how important it actually was in shaping both my personality and my interests.

But enough of that nostalgic gushing, the episode remains a scary and tense piece of work. Mulder and Scully are sent to Alaska where an entire research expedition have disappeared but not before transmitting a frightening message exclaiming "we are not who we are".

Writer Chris Carter has mentioned in interviews that the inspiration for the episode was John Carpenter's The Thing and it's easy to see the connection. In an icy landscape, a parasite takes control of your mind and body with murderous consequences. The paranoia about who is infected creates such a thick tension that it is hard not to be gripped. Even the surprising inclusion of a pre-Desperate Housewives Felicity Hiuffman does little to distract from the show.

Scarily, there are elements that would influence "real" events as well. An antarctic expedition did inexplicably go missing. Some years later a new rodent like species named the Hot Headed Ice Borer was discovered and according to the Unofficial X-Files Companion it was theorised that it was the cause for the disappearances. Just don't tell the editor that it was all an April Fool's joke by Discovery magazine.

Even if you are not a fan of the show, Ice is must see TV.


The X-Files was entering it's stride and quickly becoming a cultural phenomenon. These episode would cement the show as some of the best and most intelligent entertainment TV had to offer.