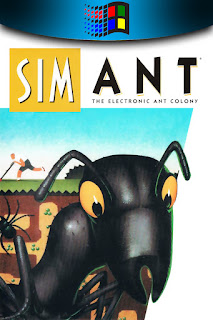 Have you ever wondered what it's like to be an ant? Probably not, but Maxis attempts to answer this question in 1991 with SimAnt, one of the many lesser known games in their Sim franchise.

If you've played yesterday's game, SimPark, you might be forgiven for thinking that this is yet another attempt at edutainment but you're only half right. There's no teacher's guide here or talking cartoon frogs. In fact, very little has been kiddified with a visual style that is very much based on real life. All there is in regards to "learning" is a brief encyclopedia about ants which can be completely ignored.

The crux of the game is basically that of a real time strategy. First, you dig a maze-like ant nest so your queen can poop out larvae in comfort, then you and your newly hatched brethren scavenge for food to amass a great army that will drive a lonely human from his one room residence. That's your ultimate goal: to swarm en-mass and take over a house. If this is really how ants are what's to stop them from taking over the world? 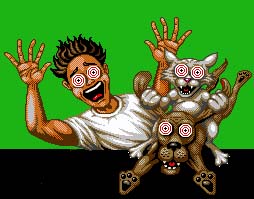 The world is doomed...

You control the only sentient ant in the colony, a yellow-skinned bug with a habit of sucking food from the mouths of other ants. You use him to guide the other insects into collecting food or fighting spiders or attacking the enemy red ants. When they die, they turn into green food dots to take back to your queen so she can crap out more spawn.

Her kids will eventually grow up to have one of three jobs, depending on how you set up the ratios. They'll either be workers, soldiers or breeders and each are necessary for the progress of ant-kind. The workers will essentially gather food and take care of the queen and her babies. The soldiers are stronger than the workers so they are perfect to attack enemies. Breeders are essential if you want to create more colonies in the garden, bringing you one step closer to total domination.

You win the game when all of the red ants are defeated and you've driven the human and his pets from his home. Designer Will Wright has said that the inclusion of the human here was the inspiration for one of the biggest selling PC game of all time: The Sims.

While the RTS elements are fun, they are overly simple compared to other classics in the genre like Command and Conquer or Dune II. When playing the game, I felt that my input wasn't really having much of an impact on the outcome. Sure enough, if you leave the game alone, your ants will continue with their tasks but what is troubling is that doing so can leads to better results, at least it did for me. Maybe I'm so bad at this game that all I do is make things worse, or maybe it's just bad design.

There is a following surrounding SimAnt. It was released on many different systems including the Amiga, Macintosh, PC-98 and others. It even had a port on the Super Nintendo in 1993. Chances are that if you were into video games back then, you had a system that could run it. In the intervening years, not much has happened with the insect end of the Sim series other than some fond memories for many gamers. If this were to have an improved and expanded remake (where you could conquer more than a single residence), I would certainly give it a go.

As it is, I really like this game. It may be simple and easy play like a 'my first real-time strategy' game, but that low barrier of entry is what makes it so accessible. Plus it's always good to get a heads up for when we're taken over by the insect overlords.


SimAnt is © Maxis
Review, Cover Design and Installer created by me