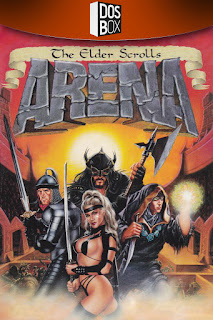 Everyone knows The Elder Scrolls. At least everyone who's likely to visit my humble site. Many of you would've even fus-roh-dahed your way through Skyrim a few years back, basking in the gloriously realised world before you. That game sold millions. The first game - subtitled Arena - only sold 3,000...

There's a very fascinating back story with how The Elder Scrolls rose from such a humble beginning. After seeing the success that Ultima Underworld achieved, Bethesda Softworks, who were then best known for a couple of Terminator games, thought that they'd like some of that CRPG pie. They then set about designing a tournament heavy game that would see you fight many arenas across the world - hence the title.

During development, the developers discovered that they enjoyed playing the side quests much more than the repetitive fights that took up the bulk of the game. Instead of releasing it as is, they decided to tweak the gameplay which in turn resulted in delaying the release date from November 1993 to March the next year. This turned out to be a poor decision as sales were incredibly slow, amassing only about 3000 in sales over its initial run. After this great disappointment, it would gradually grow over time - the opposite would normally be the case. The Elder Scrolls: Arena was gaining word-of-mouth. So much so that a CD version with added voice-overs and an opening cinematic was released and fared much better at retail.

But is the game any good? Well, yes and no. As a piece of gaming history, it's a landmark title which a massively ambitious world to explore. It's also filled with questionable design choices that hinder your enjoyment at every turn.

Once you've chosen your hero class (make sure you choose Warrior, you can thank me later), played with your stats and selected your hometown, you awake in a dungeon - just like every other Elder Scrolls game. It's funny how they all begin this way - perhaps they like the idea of emerging from, the darkness, free and blinking into the bright world that lies before you. Good luck experiencing that in this game.

The first dungeon is BRUTAL. I cannot overstate that enough - it's nigh on masochistic. You begin basically naked with nothing but your mitts for defence. If you chose the Warrior class with its higher attack statistics, you may have some luck with the many minions crawling all over the place. If you chose someone whose weak on combat such as a Spellcaster or Thief, well say goodbye to your hair 'cos even the smallest of follicles will be ripped from your head in frustration.

This dungeon is also HUGE. I cannot overstate that enough - it's nigh on merciless. Even the Warrior class won't help you with how patience-testing it is. I've only managed to get through it only once many years ago (after many, many attempts) and the thought of doing it again for this review never crossed my mind, for if it did I'll be writing to you from, an asylum.

Let's also mention the controls for a bit. It's obvious that Bethesda wanted an Ultima Underworld competitor as many control elements - good and bad - are shared. Movement can be made using the arrow keys, but it is also possible with the mouse. Hold down the left button and aim the cursor to the edge of the screen to move in that direction. It's clunky, slow and imprecise which is a major detriment considering enemies are none of those things. You also attack by holding the right mouse button and waggling it about as if you're having a seizure. That's bad enough as it is, but for your efforts, you'll have no idea whether you're making contact or not. The only way to know that you're winning the fight is after it's over, which is about 50% of the time in my experience - save often folks.

Once you've left the dungeon, you'll arrive in a town from whatever area you chose from at the beginning. While it may have looked good for the time, the visuals here have not aged well at all. These areas have the same draw distance as the dungeons (which seems to be but a few inches), but at least the underground areas have the excuse of being dark and ominous. You are now given free reign to do whatever you want, but if you want to do some questing, get ready to be here for a while. The game is incredibly vague with its direction. In order to progress, you'll need to talk to a lot of NPCs who will mostly say the same uninteresting thing. Some will give you side quests, but considering the main game was once a side quest, these amount to small and inconsequential fetch quest which yield very little reward. The main quest is just as directionless and apparently require you to talk to random people as well. I say apparently because this was when I lost patience and I gave up after traipsing around for hours making no progress whatsoever. I never found that random person.

I am not too keen on open-world games. Sure I respect the impressive technical feats and they do have a huge fan base with titles like Grand Theft Auto and Fallout 3 being considered amongst the best games ever, let alone the best of their type. I personally find them to be meandering and directionless with unfocused and inconsistent plots in a setting that I might otherwise revel in. The Elder Scrolls' first game takes what I don't like about the genre, ups them to the Nth degree and adds frustrating controls for good measure.

They did improve immeasurably with each instalment, but take away the pretty graphics, honed gameplay and fus-roh-dahs that Skyrim has and in my eyes your left with Arena - a game with ideas so ahead of its time that they just couldn't do it right. A frustrating yet fascinatingly flawed beginning to one of gaming's most revered franchises.

**UPDATE**
As of 26th July 2015, The Elder Scrolls: Arena is available DRM-free on Good Old Games. Get it free with any other Bethesda Softworks purchase.


The Elder Scrolls: Arena is © Bethesda Softworks
Review, Cover Design and Installer created by me