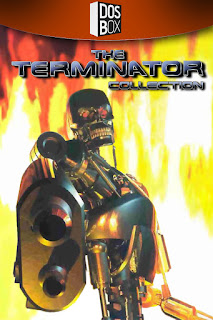 Alongside the games that were directly based on the movies, Bethesda Softworks released a quintet of shooters that far surpassed the iffy quality of anything Ocean did with the franchise. Not content with resting on their laurels, they attempted to do new things which would later become staples of the genre even today...

Their first attempt was actually the first-ever game based on the blockbusters. Released in 1991 it's a massively ambitious 3D open-world game with a huge playing field. Polygonal graphics were still in their infancy and wouldn't become mainstream until many years later. This was at a time when Wolfenstein was still a 2D side-scroller so to attempt to recreate an entire 60 acres of real-world Los Angeles boggles the mind.

For 1991, the things you can do here is astounding. Not all of them are necessary, and they often distract from the mission at hand, but it adds to the whole immersion. You can enter and drive cars, enter a store to buy or steal anything (including condoms and sanitary towels) and even cause a mass shootout by robbing a bank. Don't cause too much havoc though as the military will eventually be bought in.

There are two types are play, though in each case I simply found myself wandering about doing random things (I tend to get distracted easily in all open-world games which is only a bad thing when you want to go back to the story). The first option is to play as futuristic mercenary Kyle Reese. After you've found Sarah Connor, you are then tasked with protecting her from the T-800 then gather enough firepower to take him down. It's easier said than done.

You can also play as the Terminator himself. You need to search for Sarah Connor and destroy her without being killed yourself. You'll first need some clothes (optional) and guns (not optional) but it basically consists of wandering around until you see a woman with a blinding yellow block of hair.

The open-world nature of the game would later be refined in Bethesda's later games such as The Elder Scrolls and Fallout where huge maps and exploration are key to their success. Being the first of its type, The Terminator does have many flaws which modern gamers may baulk at. For one thing, the controls are overly complex, with many keyboard keys being used for some very minor things (entering a car uses a different key to entering a building). I often found myself scrambling to remember what key enters a car while under heavy fire. Despite its flaws, its a fascinating footnote in the history of gaming and an important entry that is all too forgotten.

The next game in the series would be a self-contained story set in the post-apocalyptic future. While The Terminator: 2029 would bear all of the hallmarks of a first-person shooter is plays more like an action-focused dungeon crawler like Eye of the Beholder.

Areas are arranged in a grid and you move in static images that would allow for much more detail than a 3D environment would allow in 1992. There's no strafing or diagonal movements and you aim on each screen with your mouse. Action is comparable to a light-gun game that only uses mouse control (think T2: The Arcade Game from the previous collection). Because you have direct control of your movements, attacking becomes a more tactical affair. You can see your enemies on the radar and using the map on the lower left of the screen will make you think about the best angle and distance to attack from. Even though it can easily devolve into click-fests, I found it highly entertaining and actually preferred it to the simple shooting mechanics of early first-person shooters.

Before you set out for each mission, you'll be given the opportunity to upgrade your battle armour which looks like a beefed-up Boba Fett. You can attach different weapons you've collected in the field or alter the defensive capabilities. There's a surprising amount of equipment to play around with and each has a significant effect on how the mission will play out. Unlike a lot of other games, you'll not be able to re-play a failed mission (unless you restore a save file). If you fail, the story will branch off into different directions and a new set of missions will play out. In this respect, it has a lot of replay value, even without the mission pack addon (also included).

Do you remember two paragraphs ago when I said that I enjoyed The Terminator: 2029's action mechanic to the simplistic FPS clones? Well The Terminator: Rampage is just that. It was released in 1993, the same year as Doom, which I think is no coincidence. Rampage has more in common with Wolfenstein 3D, which was actually released during its development time. The levels are maze-like and mostly nondescript and the game-play offers little more than shooting things.

Granted, the graphics do look really good for the time, but once you see it in motion it will no longer impress. The frame-rate is one of the worst I've ever seen in such a game. I don't get queasy in any other game, but I found this stuttering to be quite nauseating.

This is the worst in Bethesda's series and one to check out for curiosity's sake only.

Two years later and Bethesda would be back on form with The Terminator: Future Shock. This was a blockbuster title back in 1995, but it is very little talked about today. This is surprising as it pioneered a lot of genre staples. Sure it's another FPS, but where Rampage felt like a poor man's copy of better games, Future Shock felt like it's own thing.

The major innovation is in the mechanics. If you've ever played an FPS with mouse and keyboard controls, you've got this game to thank for it. It plays sublimely, even today. Just like Bethesda are want to do, the levels are huge with a large wasteland to explore. You can even enter buildings that have not yet been destroyed to find hidden items or a surprise enemy. The game design is such that it encourages exploration, but doesn't frustrate you with maze-like constructions, which shows that they've learned a lot since Rampage. You'll always have a sense of where you are and how you can back, even without using the radar.

What does date it ever so slightly, is the graphics. While it looked amazing two decades ago only looks so-so today, but the biggest detriment visually is the obviously re-used landmarks copy and pasted in the landscape. It's a testament to the design that these visual snags do not ruin the game.

While Future Shock was (and is) a high-point in both Terminator games and licensed gamed in general, Bethesda did it yet again in 1996 with The Terminator SkyNET. Reviewers of the day weren't too kind on this game, giving it average scores and bemoaning the smaller size compared to its predecessor. Nowadays, it still holds up very well and is arguably the best in the series.

The levels may be smaller and fewer, but they are also more focused. There are basic story elements withing the gameplay which is even more refined. In certain missions, there is even the opportunity to take control of vehicles. Driving away from a hoard of terminators in your jeep, mowing all that's in your way is truly exciting. A later mission involving a Hunter Killer also sees you take to the air in another fun sequence, giving a welcome variety of play styles. In addition, the cut-scenes now use that 90s gaming fad of Full Motion Video. These are hilariously bad in a good way but are easily skipped if they begin to grate.

The game now supports the higher resolution of 640x480 (it was a big deal in 1996), but it also comes with one other exciting feature. If you have Future Shock installed, you can play that game in its entirety using the upgraded XnGine and all of the graphical enhancements that implies.

And there ends Bethesda's five-year foray into the Terminator universe. The care given to these titles - even Rampage to a certain extent - make them the definitive games within the Terminator franchise. If you've played any of the many versions that take inspiration from the films directly you can see just how special it is that they even exist. They are not just good, but also important in the history of our favourite pastime that should not be forgotten.

To download the game, follow the link below. This custom installer exclusive to The Collection Chamber uses DOSBox to bring the game to modern systems. Some manuals included. Tested on Windows 7.