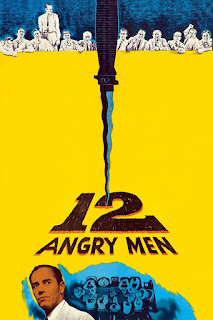 12 Angry Men currently stands at number 7 on IMDB's top movies, yet if you take a glance at the comments, there are many movie goers who're baffled by this choice. The main reason seems to be that they haven't heard of it, so why has it garnered so much acclaim?

Other than the obvious fact that this movie is nothing short of a masterpiece, Sidney Lumet's 1957 film is also a masterclass in direction, acting and mise-en-scène. For all but three shots, the entire film takes place in a single room where twelve jurors debate the innocence of a seemingly guilt murderer. There's quite a lot of characters to juggle here in a very confined space, but it is never confusing. As the film progresses and tensions rise, the room itself almost becomes its own character. Shots are filmed with and increasingly narrower lens and the camera lowers below the eye line to an almost claustrophobic effect.

It is perhaps this unassuming lack of action or location that causes it to pass a lot of audiences by, but doesn't mean that the film itself is lacking. A glimpse at the other movies in the top ten seem fairly obvious - and more modern.

Henry Fonder is the only man in the room who believes that the defendant, an underprivileged  boy of 18 who is accused of killing his abusive father, might be innocent. He spends the next hour and a half convincing the other eleven that there is a reasonable doubt, and.he does this in a very convincing way. But is what he says it all true or even lawful? In truth Juror no. 8 broke the American law by conducting his own investigation. Any arguments against the prosecutions claims must be made in court which was not done so. Does this mean that the boy is guilty or murder? Maybe, maybe not.

This film cannot be seen as an accurate portrayal of how a juror deliberated. It is a fictional Hollywood movie after all. What it is is a indictment of the legal system that only works if all parties do there jobs properly. The council for the defence obviously didn't and it is mentioned several times in the movie. Most of the jurors see the case as cut and dry, without willing to discuss it or putting aside their prejudices. If this were to be a movie that is truthful to the reality of the situation, then it wouldn't be as engrossing.

There is a reason as to why this movie is rated so highly and that it is often used in seminars for conflict resolution. It is a story of one man standing alone and successfully convincing his colleagues to his way of thinking without even so much as raising his voice.

This was the first film to be directed by the directing legend Sidney Lumet (Dog Day Afternoon, Network, Before the Devil Knows You're Dead). He is one of the greats in cinema that can often be overlooked for the more flashy (but equally great) directors like Francis Ford Coppola or Stanley Kubrick. If you haven't seen or heard of this film, you must correct it immediately. It is simply one of the best films ever made and 368,323 IMDB voters agree (compared to the 1.5 million that voted for The Shawshank Redemption).