LEMORA: A CHILD'S TALE OF THE SUPERNATURAL 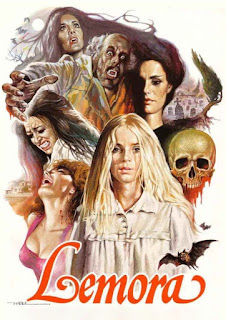 Lemora: A Child's Tales of the Supernatural, a 1973 movie directed by Richard Blackburn, is a dark fairytale of a horror film that will leave you with a great sense of unease. On the surface it's a tale of vampires, zombies, witches and werewolves but if you dig deeper it's also a tale of innocence lost, sexual awakening  and the uncomfortable transition of a young girl to womanhood

Lila Lee (Cheryl Smith) is living with her adoptive guardian the town's Reverend (played by the director Richard Blackburn). Her mother has passed and her father is the notorious gangster Alvin Lee (William Whitton). The Reverend has taken great pains in teaching the thirteen-year-old Lila the honest Christian life, and she has gathered minor fame herself as an angelic choir singer.

One day, after news of her father's escape from prison, she receives a letter from the Lemora (Lesley Taplin). She states that her father has been staying with her and has become morbidly ill and that his final wish is to see his daughter again to ask for forgiveness. Ever the trusting Christian, Lila takes the journey to reunite with her father, and is beset with dangers every step of the way.

For such a low budget film, the visuals here have an atmosphere that is thick with dread. Most of it takes place at night so scenes are constructed to take advantage of this, having background moments only barely visible while our protagonist, dressed all in white, almost glows with clarity. She is the focus here almost to the point of being voyeuristic. The journey begins seemingly ghoul-free, but the regular men she encounters have a disturbing leer towards Lila. Even the Reverend himself feels this sexual desire but forces himself to resist.

It's not long before some true monsters appear, as a zombie hoard forces the night bus to crash. This scene was inspired by similar events from the H.P. Lovecraft novella The Shadow over Innsmouth, which also carries themes of untrustworthy townsfolk. She is then taken to a cell at Lemora's estate where an old cackling witch brings her food, singing a spooky nursery rhyme.

There was an old woman of skin and bones
She did weep and she did moan
She walked on through the atreets of town
Where all the dead lay on the ground
Then turned an to the parson said
Will I look like that when I'm dead?
The parson to the old woman said
BOO!

The idea of death is ever present. The grounds are thought to be cursed with a deathly plague which is the rather poor excuse Lemora gives for her being locked up. This classic rhyme, while designed to give a Halloween scare to primary schoolers also displays the fears of what growing means. When your young time seems to lasts forever yet the ascent into adulthood is also the realisation of your own inevitable mortality. The immortality of the villain becomes a draw, but is it just the escape from death that does this? There is a rather obvious lesbian overtone to the character of Lemora as she coaches Lila for her own needs. At this point all of the male characters act fairly badly towards her, either by attacking her or by making obvious advances towards her. The false kindness Lemora shows her could be misconstrued as love.

Upon release, it was banned by the Legion of Jesus and accused of being anti-Christian. It was released on VHS and later DVD in America, but the UK was saddled with a sole VHS release in 2000 that was cut and renamed Lemora: The Lady Dracula.

This dark fairy tale of sexual awakening is one the greatest lost horror movies. The nightmarish style and psychological themes owes more to European cinema than Hollywood movies like The Exorcist which came out in the same year. It's a wonderfully creepy and atmospheric and well worth tracking down.

LEMORA: A CHILD'S TALE OF THE SUPERNATURAL (Richard Blackburn, 1973) SPEC2BER Trailer from Spectacle Theater on Vimeo.