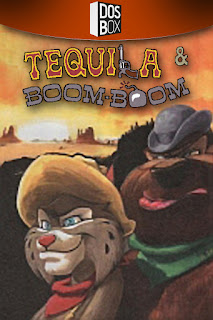 Before starting this site, there were few adventure games that I hadn't at least heard of before. It's a genre that's very dear to my heart so it was a great surprise to find Tequila & Boom Boom whilst browsing the web.

There is very little information about it online, which is surprising considering it's very high production values. What little I did find was that it was developed by Dynabyte of Big Red Adventure fame and released only in Italy. The game I played is fully in the English language so it's possible that a small UK or US release was planned, but later cancelled.

Take one look at any screenshot and you'd be forgiven for thinking it was a Don Bluth animated movie. The graphics are spectacular with lengthy cut-scenes. The animation is smooth, but they do repeat often. Perhaps as a budgetary constraint or as a means to reduce time sent in the translation, the dialogue scenes are animated in short cartoon loops. It can distract from the overall presentation and it does draw attention to the unimaginative script and often bland voice acting, but I doubt many players will mind too much.

You begin as a lone bobcat named Tequila entering a small wild west town named Stinky Town, a once prosperous site that was betrayed by the false promise of gold in the nearby mountains. The first place you'll visit is the saloon occupied by a poker-playing gang. This is where shit will go down! Seriously, you've been playing the game for five minutes and you'll be the instigator of a deadly fight between two ne'er-do-well gamblers.

It transpires that Tequila is not a man of the law like his cowboy swagger may suggest, but an outlaw rogue. Thankfully he's the lovable kind. So lovable that the sheriff of this place is an old friend. If you're wondering who the Boom Boom of the title is, I can tell you it's not any dubious act he gets up to on the first floor of the saloon. Boom Boom is an old canine partner in crime who refuses to leave the stench of Stinky Town as he stubbornly believes that there's gold in them there hills.

There's not much of a story overall, just a collection of gorgeous looking connected scenes. It plays well for it's intended target audience of primary school children (5-11), but there's little more in this respect for discerning adults. The puzzles are fairly simple too, with the only real difficulty coming in the odd pixel hunts and unexpected QTE's. What kept me playing was the stunning way it looks.

Dynabyte have certainly come on since their previous game, Big Red Adventure, was released. Tequila and Boom Boom is an improvement in practically every respect. It's even a lot easier to install (Big Red Adventure was notorious for this). The areas are designed for their cinematic feel, often changing the camera and using close ups where needed and it certainly adds an immersive cinematic feel. It's a technique usually reserved for movies and one that not even the classic The Curse of Monkey Island used to this level, though it is ultimately the better game. If you enjoy point & click adventure games, this is definitely one to play.


To download the game, follow the link below. This custom installer exclusive to The Collection Chamber uses DOSBox to bring the game to modern systems. Tested on Windows 10.
14.03.2019 - Ver.2 -  Changed fullscreen resolution to suit all desktops. Fixed save issue.


Tequila & Boom Boom is © Dynabyte
Review, Cover Design and Installer created by me 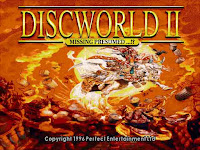 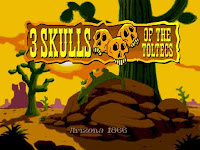 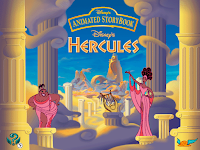