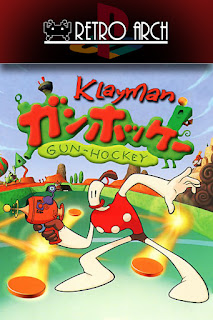 For some reason, The Neverhood characters were much more popular in Japan. So much so that the original point-n-click adventure received a PlayStation port only in that country. In 1999 they also got their own fourth game in the series - the budget title known as Klayman: Gun Hockey....

There's not much to say about this game. The Neverhood developers had no part in it and it lacks the claymation look and quirky humour. Those who don't speak Japanese or willing to take the time-consuming task of using Google Translate aren't missing much with the story, which is asinine and irrelevant. From what little I did understand, it reads like a toddlers children's show on Disney Jr.

Playing the game is often a chore. It's your basic air hockey but in place of a paddle is a gun, which is always aimed at the puck. This gets frustrating quickly as whether you hit the floating disc is based entirely on luck rather than skill.

There are several power-ups that you can collect by knocking into a floating icon. Their effects are the same as every single Breakout clone since Arkanoid: a barrier in front of your goal, a speed boost, a multi-ball just to name the most common. The latter makes the game even more frustrating as your auto-aimed weapon gets a bit confused as to which puck to aim for.

You will play against a lot of familiar faces during the game. They roster consists of Klayman, Willie Trombone, Klogg, King Hoborg and Weasal, the man-eating plant at the beginning of The Neverhood. It's like the developer KIDSMIND desperately needed a fifth playable character but after listing the famous names only played through the first few moments of The Neverhood to get their combatant.

The game is entirely in 3D polygons. They are simple and distinctive with no distractions to keep you from the play field. The story is not presented by gorgeously animated cut-scenes but by generic stills that capture none of the property's charm. The music is also alarmingly bland, resembling elevator music - a far cry from the jazzy tunes of the other three games.

What we have here is nothing more than a diversion. A mini-game dressed up as something more. Even at the original budget price I would've been a little disappointed, but it has now become something of a collectors item being one of the more expensive imports from the east. Play it for the curiosity, but there are better shuffle-puck games out there.


To download the game, follow the link below. This custom installer exclusive to The Collection Chamber uses Retroarch with the Mednafen_PSX core to emulate it on PCs. Keyboard and XBox 360 controllers supported out of the box with the keyboard controls mapped to my preferred optimal specifications. Menu translations incluced. Tested on Windows 7 and Windows 10.
08.05.2015 - Ver.2 - Updated emulators and improved menus
14.03.2019 - Ver.3 - Improved menus


Klayman: Gun Hockey is © KIDSMINDS & Riverhill Soft
The Neverhood Chronicles is © The Neverhood & Electronic Arts
Review, Cover Design and Installer created by me 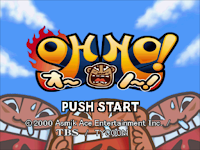