A BOY AND HIS DOG 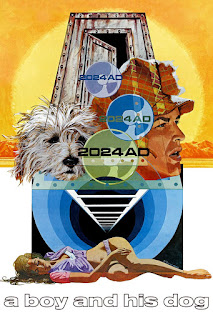 2024 A.D. The world (or at least America) has become a wasteland of radioactive dust. Men fight for the most precious resources: food, water and women. And dogs have developed telepathic abilities. Welcome to the bizarre post-apocalyptic world of A Boy and His Dog.

Based on Harlin Ellison's 1969 short story, the low budget movie won a lot of critical acclaim upon release in 1975. It follows the streetwise teenage boy of the title, Vic (a young Don Johnson) as he searches for women to satiate his newly surging libido. He's not alone as his loyal companion Blood assists him on his quest in return for a share of the food. The thing about Blood is that he's a highly intelligent telepathic dog with an eternally hungry belly and a penchant for limericks and bad puns. Not your average best bud, but it's a brilliant dynamic winningly portrayed by Johnson and the dog from The Brady Bunch.

It's not all candyfloss and marching bands though. The "Down Under" is revealed to be a nasty totalitarian society under the surface. All the flash of the festival hides an ugly core where even the slightest disobedience lands a person on a one-way trip to the "farm" (read: getting your neck snapped like a twig). In a similar fashion, the citizens paste their faces with garish white make-up, masking their true, less then altruistic  motives. I don't want to give too much away here, but let's just say it's no coincidence that Vic and Quilla met. It's called A Boy and his Dog, not A Boy and his Girl after all.

This "rather kinky tale of survival" has rightfully earned cult status. It has also earned the ire of some people who deem the tale misogynistic which, while not wholly inaccurate, misanthropic is probably the better term. Most of the women are there to be used or objectified by the characters but it doesn't ask the audience to view them with the same eyes. Every element of this society is deplorable and it doesn't hide from this fact.

To quote Ellison himself:

"I used history as my model for the condition of the country in A Boy And His Dog, where, after a decimating war, like the Wars Of The Roses, for instance, the things that become most valuable are weapons, food, and women. Women were traded and treated like chattel. I tried to make it clear in the stories and the novel that I found this distasteful, but it’s the reality of what humanity’s like when it’s gone through this kind of apocalyptic inconvenience, if you will."


I also find it very telling that the only character that actively pursues any kind of change in this bleak world is a woman - Quilla herself. Vic may be the protagonist, and he's not a very likable person, but it's Quilla that actively puts events in motion. Ultimately, Vic a product of the world he lives in. His motivation lies only with base instincts: his stomach and his groin. This is what gets him into trouble and on an adventure that ultimately changes very little about him (at least within the time frame of this adaptation). To an extent, the dog becomes the voice of reason. He is often just as disgusted as we are by Vic's actions, yet chooses to do nothing to break their symbiotic relationship. He's also a dog - loyal til the end. While he does not try to change his master's actions, he does try to change Vic himself. Throughout the film he acts as the teacher, attempting to educate the preoccupied teenager on history before the fallout. He also chooses to call him Albert. Is this and attempt to shift the master/pet dynamic or does the name offer a perceived civilised ideal of who he wants Vic to be? Ellison did take this name from the 1940s novelist and dog breeder Albert Payson Terhune so it also simply be an in-joke.

Say what you want about this movie, it's certainly one that has endured these past 40 years yet has never quite gained the widespread recognition it deserves. Many of you may know of the movies and novels that were directly inspired by it, including George Miller's Mad Max movies and Cormac McCarthy's The Road. Both take certain aspects of Mr Ellison's work and runs with it. In tone, A Boy and his Dog sits somewhere between the two, being just as strange and flamboyant as Miller's world and as bleak and meaningful as McCarthy's. Even Fallout 3 made heavy references. If you liked any of these, then A Boy and his Dog is a must see science-fiction film.