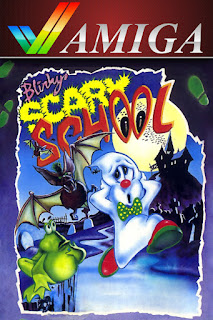 Blinky's Scary School, a budget platformer from UK developer Zeppelin Games, holds the dubious distinction of being the first game I ever completed. That bodes well for how it could play with my grown-up eyes, but I won't let that hold me back. I must replay it! Along with a sequel I only just found out about.

Released in 1990, the Amiga was not the only system this spooky game series was released on. It also came out on the Commodore 64, the ZX Spectrum, the Atari 8bit and the Atari ST. It was on the latter where I first enrolled in the Scary School and it quickly captured my imagination, so much so that I didn't stop playing until completion.

When the game boots up, you're greeted with an annoyingly cheery tune. Every now and then it pops into by brain like an aneurysm, even into adulthood. It's that catchy. For years I've been struggling to find out where it's from. Is it the theme from Quantum Leap? It's similar, but not quite. I even thought it may have been ripped wholesale from another cheesy 90s TV show. Now that I know the source, it's come back to torment me. During play, it may stop to make way for sound effects during the levels, but it's become trapped on repeat in my mind's boombox, tricking me into thinking it has a continuous soundtrack.

Anyway, while I try my best to repress this nasty earworm, let's talk about the graphics. They're as bright and bouncy as the theme song with some large and very appealing sprite work. You control Blinky, a ghost in a bed-sheet with bright red shoes and cute puppy-dog eyes. They are particularly expressive during the death throws when he loses a life - or is that another death? Either way, it's an animation you'll see often. The game requires you to memorise the map due to a large number of traps and leaps of faith. It's not that hard as the game world is fairly small and I remember those blind jumps giving me the senseation of discovery rather than frustration. Blinky himself is not that hard to control. He has a specific and precise jump which the levels are designed around, resulting in some skills that are very satisfying for a seven-year-old to pull off. They hold little to no challenge now.

Where the challenge does lie is in the enemy placement. Some enemies are positioned in such a way that it is impossible to not get hit. Thankfully the game features a health bar instead of those one-hit deaths which ease the pain so avoiding them is not the main focus. It may surprise you that the main mechanic is not based on levels or high scores, but on Dizzy style inventory puzzles. Your first task is to find the ingredients for a spell and bring them back to the cauldron (your starting point). There are loads of random objects about including a red herring, a torch and toilet paper, each one having a purpose. You can only carry three at any one time so you first have to figure out the ingredients by finding the shopping list.

Some areas require you to have an object in your inventory in order to proceed. For example, a torch will let you see in the dark, or a roll of toilet paper will let you flush yourself down the loo (I laughed SO hard at this at the age of 7). I found the treasure hunting aspect of this great fun as a child. As an adult, I still do to an extent, though it is very simplistic offering little challenge. Seasoned gamers in search of an inventory platformer may want to stick to the more complex Dizzy series.

A year after Blinky graduated from the Scary School, unbeknownst to little ol' me a sequel hit by the name of Titanic Blinky. This time the theme song is replaced by a line of muffled speech and the action takes place on a ship. This could've been an interesting sequel, but it removed everything I liked about the first game. The inventory is no more. Instead, you're presented with a straightforward action platformer. You're even given a pop-gun to shoot enemies with. It's also useful to crack open some snail shells, caps and other objects to reveal some collectables. Ultimately this jaunt on the Titanic left me as cold as the iceberg that sank it.

Even so, the graphics and controls are pretty good, especially as it was again designed to be a budget title. The jumps no longer have a preset arc but can be controlled mid-flight allowing you to aim your landings better. The main gimmick is the ability to change costumes. If you have them, the changes are done automatically depending on the situation. Want to travel underwater? Get some scuba gear. Stomp on enemies' heads? Be a lame superhero. Like cake? BE A CAKE!

The levels aren't entirely open either, with only the scuba gear taking place outside of a separate area. The rest automatically transport you to its own uninspired section taking zero advantage of the costume's unique abilities (if they actually have one). Even so, had I saved my pocket money for three months, I would've been able to afford the £2.99 asking price 25 years ago. And for this price, I doubt I'd have been disappointed.

It was great playing Blinky again after all these years. It surprised me how I remembered every puzzle and item very clearly in the first game. It may be my nostalgia goggles talking but Blinky's Scary School is a fantastic if simplistic hidden gem. Shame about the sequel though.

To download the game, follow the link below. This custom installer exclusive to The Collection Chamber uses FS-UAE to emulate the Amiga on modern PCs. Manual included. Tested on Windows 7.


Blinky is © Zeppelin Games
Review, Cover Design and Installer created by me