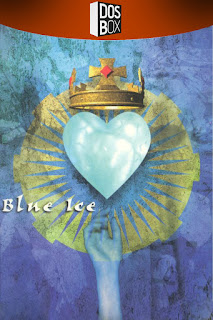 Are you tired of easy Adventure games? Do you guys crave a truly difficult challenge? Then try Blue Ice - a game so hard no-one has ever solved every single riddle in the twenty years since it's release. A game where even the designers themselves have no clue how to succeed.

The game's existence is something of a strange story. It was designed as a competition where if a hidden code was found, you could win One Million Pounds! This idea was eventually scrapped but the optional treasure hunt still remained in the game when it was released in 1995. Any information about these cryptic clues have alas all but disappeared, with only the game's designers Rik Yapp and Carol Yudds revealing half-remembered tidbits.

There's two, arguably three parts to Blue Ice. First, there's the standard adventure which can be completed by the above-average Joe. It's no cakewalk, but with enough perseverance, a much-needed journal to aid with code-breaking and - most importantly - a walkthrough, it's doable. The second part is what has become to be known as the Ultimate Solution. Gather all of the hidden cryptic clues, decipher their meaning and, if the competition still went ahead, send it off to Psygnosis for a chance to win. Solve it now and all that remains is bragging rights.

There's also a mass load of red herrings which are designed to throw you off the true path, further adding to the difficulty. Some fans see this as the third part of the game, but all I see it as is glorified trolling. Intellectual style. The winning answer is known, along with the results of each red herring, but there are several missing gaps in how to get there. Can you find them? It'll drive you crazy trying to do so.

I've yet to see the end screen but you shouldn't be quick to judge me on that - there isn't one. Due to the focus on a competition, they didn't want cheaters hacking into the game to reach the final screen. As such the final answer is not displayed on-screen with no indication if you're following the correct path. Just write EVERYTHING down and try to piece it together later. Or you can ignore all this and enjoy a challenging game.

There's not much of an actual story here, and what there is, is presented so lyrically that any nuances can easily pass by a lot of gamers. Basically, you are a young prince struggling to prove himself worthy after his father the king passes away. Each screen will begin with prose that acts as both a narrator for the story and a subtle foreshadowing of the puzzles to come. Your gonna need all of the clues you can get as they all have some degree of Mensa moon-logic but translated through the mind of some very talented artists. Each screen is a triumph of modernism with hidden icons and images on each screen.

One such puzzle requires you to take the sun in order to melt a frozen lake so that you can obtain a key from the anus of a goldfish so that you can enter your own palace. Just to throw things off a bit, there's a ghost flying amongst some birds and a paper plane that can be manipulated for seemingly no reason. There probably is a reason but in truth it just makes my brain hurt.

Also included in every screen are some hidden images. Each screen contains a grid of 16 numbers (apparently a clue for the Ultimate Solution), a hidden question mark which will give you a clue that's as cryptic as the puzzle itself and lastly there's Orseppro and her daughter Hope. The story is that Orseppro was tired of seeing the negative effect of unjust laws created by the paranoid departed King. She decided to take matters into her own hands by removing items from the kingdom and are "carried by her daughter Hope in a rainbow of colours". Huh?

Enough of the strange story and crazy puzzles. Let's talk about something more palpable - the controls. Using the mouse, you interact with the world in one of three ways which you can select by holding down the right mouse button. First, there's the standard arrow cursor which is used for movement between screens. Then there's the magnifying glass will allow you to read or look at items and objects. It can also be used to read the minds of any character. Lastly is the hand, which will allow you to interact with an object or add it to your icon list along with the main three. It's not very streamlined, but then this isn't a game to not take your time over.

I may not have got too far, making me feel like a true dunce, but there's something magical about this game. Perhaps it's the incompletable nature that's not down to poor programming but sheer intellectual difficulty that fascinates me. I'm sure there's an entertaining creepypasta waiting to be written about Blue Ice and those mythical gods among men who complete it 100%. Until then, this treasure hunt is still open waiting for anyone to test the metal of their grey matter.

To download the game, follow the link below. This custom installer exclusive to The Collection Chamber uses the DOSBox-X build of DOSBox to bring the game to modern systems. Manual and an as-complete-as-possible walkthrough included. Read the ChamberNotes.txt for more detailed information. Tested on Windows 10.
07.03.2022 - Version 2 - Now uses the DOSBox-X build of DOSBox for better compatibility.
Gravis Ultrasound audio emulation now included as default. Change to other
sound configurations by running Setup.bat from the install folder.


Blue Ice is © Psygnosis
Review, Cover Design and Installer created by me