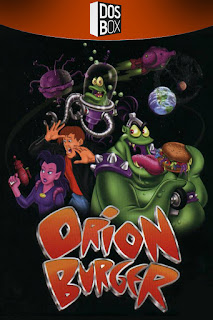 For those who had played The Riddle of Master Lu (also on this site), having the name Sanctuary Woods displayed on the box should be a reason for excitement. This vastly under-appreciated developer would only make two non-educational adventure games and Orion Burger, their 1996 entry, marked the sad end of what was once a promising proponent of point-and-click goodness.

The Riddle of Master Lu excelled in a fantastic story, impressive visuals and great design that stood out from most other adventures. The sales were below what was predicted and it was one of many disappointments that contributed to a $2 million loss for the company in 1995. Orion Burger sold even less. After these sever losses despite publishing over 30 games including classics like Presto's The Journeyman Project, Orion Burger was an unfortunate casualty caught in the crosshair. Publishing duties were outsourced to Eidos who gave it a very limited run with none of their advertising might behind it. So the few copies that were actually made bypassed its target audience and it failed to make any kind of money back. Unsurprisingly it now commands huge prices online if you can find it.

The apathy Eidos give to the game was completely unwarranted. It has a high quality and striking cartoon aesthetic that still looks great. Based on this alone, I would've thought it could've performed better than it did but on top of that it's a fun cartoon adventure with plenty of great jokes and taxing puzzles. The professional voice cast will bring back fond memories of anyone who watched cartoons in the 90s including such talent as Rob Paulsen (Yakko from Animaniacs), Jim Cummings (the modern voice of Disney's Pegleg Pete amongst many, many others) and Dee Bradley Baker (Daffy Duck in Space Jam). Some characters do grate at times with some weirdly chosen voice work but overall it's pretty darn good.

The plot involves the intergalactic version of MacDonald's whose best-selling Orion Burger is in dire need of new meat. That new meat is us - the earthlings known locally as "human beings". But first, the fast-food chain's protein procurement agent Zlarg has to prove that we are not a sentient species. Cue the abduction of Wilbur Wafflemeier, a slacker with no direction in life who now has to complete five tasks to prove intelligence and save the human race, all the while being sabotaged by the greedy Zlarg.

These tasks do have a time limit to them but due to a malfunctioning doohickey on Zlarg's spaceship, you are caught in a time loop giving you ample space for trial end error. The negative side of this is that there is a lot of backtracking and repeated scenes (though most puzzles do not need to be re-done once completed). The puzzles fall into two categories: inventory-based and dialogue-based. The inventory puzzles can often verge on the moon-logic side of things and will be the main cause for any lost time. Dialogue puzzles simply mean navigating through entertaining conversations correctly. You do have to pay close attention to all of these scenes as they may contain clues on how to progress. Be cautious though - if you need to repeat a day, these un-skippable scenes are re-played due to the central Groundhog Day mechanic. It's amazing how tedious these initially entertaining scenes can get after many repeat viewings.

If you take away the time limit and constant back-tracking, it is not a particularly big game. What is there is good, often verging on excellent but what really holds it back is the repeating time loop mechanic. It doesn't give you much leeway to experiment with the puzzles and can often feel like a way to artificially extend the length of the game. As such I recommend having a walkthrough on standby to minimise any frustration. Were it not for this, I would say the high prices it can now go for is justified. Everything else about the game has the same high quality that Riddle of Master Lu had but as it stands, it is simply a very good rather than great game.

To download the game, follow the link below. This custom installer exclusive to The Collection Chamber uses DOSBox to bring the game to modern systems. Manual included. Tested on Windows 7.
22.11.2017 - Version 2 - Changed resolution to suit all desktops
Fixed German description error


Orion Burger is © Sanctuary Woods
Review, Cover Design and Installer created by me 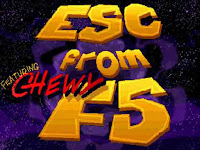