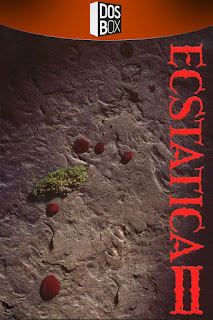 Last week, I talked about how the craziness present in the first Ecstatica was enough to overcome some very real design flaws. Does a sequel that irons out the creases make for a better game? Let's find out...

As a man, it all goes to shit.

It begins much like the first game with our nameless hero riding horseback to an ominous locale. This time, your rescued maiden Ecstatica rides with you. You soon come by many fallen bodies left to rot on the path. Despite these warning signs, you cross the drawbridge into your kingdom, only for a bloody gargoyle to swoop down and snatch your betrothed. How can the same shit happen to the same guy twice? I would never happen if you were born a woman!

Instead of killing you outright like they did to so many others, you are put in the stocks. It doesn't last long as a magical Priestess frees you and your adventure begins. The first thing you'll notice is how everything looks pretty much the same. Everything is still made of ellipsoids and the colour palette makes the area look exactly like Tirch. It does seem less cartooney though, yet still strangely cute. Even the insane amounts of gore and torture make me want to go aw rather than ew. More orbs have been placed onto our hero drastically reducing the balloon animal feel - a big plus. This allows him to have more movements as well as the ability to blink. The upgrade to SVGA doesn't hurt either.

The world is now much larger being host to more than just two puzzles, though they're still mostly of the find-this-object-to-open-locked-door variety. Even though there's more to explore and see, the many, many fights still feel like they're artificially extending the length of the game which is only exacerbated by the infuriating number of re-spawning enemies.

It's also very difficult. In its original carnation given to journalists at the time, it was considered so hard Andrew Spencer Studios added two lower difficulty settings last minute. These make enemies easier to kill while dishing out less damage. Nevertheless, even on the easiest setting, you'll still see the game-over screen way too often. This is because they didn't reduce the number of enemies. You may remember in my original review that it is all too easy to be cornered into a never-ending attack with little chance of fighting back or escape. Add half a dozen re-spawning beasts and you have no hope to succeed.

The fighting is not all hopeless though. The controls are improved, with movement now mapped to the arrow keys and actions taking place on the left side of the keyboard. You also have learned a new range of nifty combat moves too, making you less dependent on weapons. You can even learn a couple of spells, one handy one clearing the entire screen. Each round kick and back-slap are beautifully animated - something that the ellipsoid graphics engine excels at - but it can also hinder your play. For a lot of actions, there's a bit of a delay as the animation sequence plays out, leaving you open for attacks. It may be faster overall than it's predecessor but the sheer number of monsters that can appear without warning only aids to frustrate.

Upon its original release in 1996, it was praised for its many improvements over the original, garnering some very high review scores. Most even said it was the better game. While I can still easily recommend it and enjoyed it quite a bit I found that the original was much more fun, despite lacking the sequel's added depth. And this all boils down to something that I'm definitely biased towards - the dark humour. While it's still there in spurts, there's far less of it this time around. There's no tea with the devil or naked men in gimp masks (although the odd Chelsea-bun boob does appear). In fact, to my recollection, the only speaking character is the ethereal Priestess who loves to talk in voice over. To me, this takes away from what made the first game so memorable.

To make way for this game, Andrew Spencer Studios delayed work on another ellipsoid title: Urban Decay. Unfortunately, this action game set in the modern-day was cancelled and Andrew Spencer left the industry to work as a programmer for the Dynamics Research Group at the University of Sheffield. I often wonder what the gaming landscape would look like if the ellipsoid engine had taken off, being refined over the years. Would a model filled with millions of tiny balls instead of polygons look better or worse with today's technology? Alas, we'll never know.

Ecstatica II is a very worthy sequel to a lost franchise. If you can again stomach the controls and the upped difficulty there's a lot to enjoy, perhaps even love. For me, if I were to revisit the series, I'd rather replay the original. It had more balls (no pun intended).

To download the game, follow the link below. This custom installer exclusive to The Collection Chamber uses DOSBox to bring the game to modern systems. Manual included. Tested on Windows 10.
26.08.2016 - Version 2 -  Fixed graphical error in DOSBox