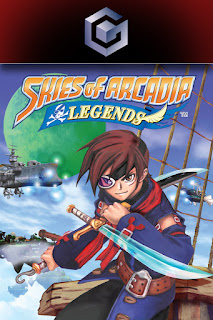 The ill-fated DreamCast saw the birth of some great franchises from a company at arguably their creative peak. Unique franchises such as Crazy Taxi, Jet Set Radio, Space Channel 5 and Shenmue all got their start here. Skies of Arcadia, created by SEGA's Overworks division contained some of the best RPG goodness the system had to offer but suffered in sales (it was released in the West in 2000 around the time SEGA announced the discontinuation of its hardware division). In 2003 after the DreamCast was put to sleep, an enhanced port quietly sprang up on store shelves for their onetime competitor: Nintendo's GameCube.

Both systems suffered a dearth of J-RPGs so Skies of Arcadia, although not a big seller, was very welcome. It helps that it's also pretty damn good. The plot focuses on Vyse, a sky pirate aligned with the Blue Rogues: a band with Robin Hood-like tendencies. By your side is the ever perky and pig-tailed Aika, a childhood friend with a barely disguised crush on our hero. We join them as they attempt to raid a floating galleon from the evil Valuan Empire, but find a far different type of treasure: a mystical girl named Fina. This kicks off one epic and exciting adventure where the fate of the world holds in the balance.

So the story isn't particularly original. Even later story beats don't make you gasp in surprise, but it's the way it is told that puts most other J-RPGs of the time to shame - including the pouty teenage angst and daddy issues found in Final Fantasy X (I have issues with that game). All towns are located on floating islands, not unlike Zelda's last offering on the Wii, but the means of travel is in a rather awesome steampunk airship. It's a world that demands exploration and it's very rewarding when you do. The characters are all memorable with refreshingly upbeat personalities. At a time when Emo was becoming a thing, this was not the norm. The closest any SquareSoft game got to this was probably FFX's Rikku - a stereotypical high-pitched cliche of a Japanese school girl.

If there was one thing that makes it stand out from its bigger budgeted competitors is the inclusion of airship battles. They have a huge sweeping cinematic sensibility that makes then incredibly exciting, even if your direct control is a little limited. Much like other console RPGs at this time, battle sequences are turn-based requiring a lot of strategy and forethought. For the ship battles, you're given one of four options: evade, primary weapons, special cannons or focus. If you think your attacker is going to fire at you, choose evade. You could make do with either attack but neither has a guarantee that you won't get hit. The last option acts as a magic gauge and is the most interesting. If you fire your cannons willy-nilly, the result is a rather pathetic single ball spat out from the side of your ship. The more turns you take to focus, the more you can spend on your attack and the more effective it will be. The downside is that you're now left open to whatever your foe can muster up. The trick is to anticipate what might happen based on the enemy's movements which is not an easy feat.

The smaller, ground-based fights are more traditional: select an action, change it up when needed. You can perform normal physical attacks, a variety of magic spells and use items. Along with your health points, your magic points are shared for the group. The bar increases whenever the enemy attacks, but you can again focus to fill it up much quicker. When full, one character can spend this energy to perform their special attack which can get to Final Fantasy levels of animation (thankfully they are skippable if you get tired of seeing them). Each character has many special moves, but you need to find the elusive moonberries in order to unlock them. A lot of the side missions will reward you with these, making the reward truly feel like treasure.

The moons (of which there are several) also play a major part in battle. Not only are they necessary for moonberries to exist, but moonstones, embedded in every weapon, has an impact in your fights. There are several coloured stones, with each hue representing the four elements: Earth, Air, Water, and Fire. They can be switched on the fly to better prepare for the fight ahead, as some foes are weak or strong against certain elements. It's not particularly original but it's executed very well.

There are some negatives, however. Fights are encountered randomly, and they are infuriatingly frequent at times. The GameCube version has been toned down somewhat but not enough that it won't mar your enjoyment a little. The graphics are also dated. Very little has been done to make use of the benefits Nintendo's machine has to offer with only minor upgrades to the central characters' polygon count and an increase in frame-rate. I actually like the bright, bulky but defined style and think it adds a lot of charm but others may not agree. One thing's for sure is that it in no way hinders your enjoyment of the actual game. This is probably a blessing in disguise as the emulation of PC is close to flawless. In fact, the Dolphin emulator for GameCube is so successful it trumps any current DreamCast emulators attempt at running this game.

I had a blast playing this on my DreamCast fifteen years ago and jumped at the chance to revisit it a few years later. There isn't much new beyond a couple of side missions but I do feel it warrants the 'Legends' subtitle. It stands tall amongst its peers yet rarely gets any notice which is something that should change. This is a must-play. SEGA, instead of those crappy Sonic games, how about a new Skies of Arcadia?

To download the game, follow the link below. This custom installer exclusive to The Collection Chamber uses Dolphin 4.0 to emulate the game on PCs. Manual and Guide included. XBox 360 controllers supported. Tested on Windows 7 and Windows 10.
20.05.2016 - Version 2 - Updated emulator, improved menus and fixed installer


Skies of Arcadia: Legends is © SEGA
Review, Cover Design and Installer created by me