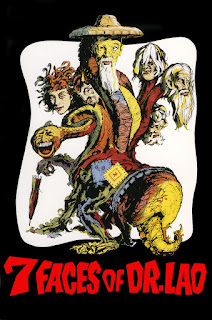 Directed by George Pal (The Time Machine) and starring Tony Randall (The Odd Couple, Pillow Talk), The 7 Faces of Dr. Lao invited children of the mid 60s into the circus tent of our multi-faceted doctor. What unfolds is a series of morality tales instigated by the mischievous Lao and his many alter egos from mythology.

The fictional town of Abalone, Arizona is our setting. It is located in the middle of a dust bowl where water is becoming ever scarce due to some pipes that are in need of some expensive maintenance. Clint Stark (Arthur O' Connel, Anatomy of a Murder, The Poseidon Adventure), a local entrepreneur uses the situation to his advantage as he attempts to buy the town from under them. He alone has the knowledge that a railroad is to be built nearby bringing wealth and prosperity.

This main story is nothing but a backdrop - a device to get all of the townsfolk together and to explore each of their troubles. It was based on a 1935 novel by Charles G. Finney which was essentially a series of unconnected stories so this tale was written for the movie.

The main characters include Angela Benedict (Barbara Eden, I Dream of Jeanie), a teacher and widow raising an adventurous young boy is unwilling to move on and accept the advances of the local newspaper journalist Ed Cunningham (John Ericson, Bedknobs and Broomsticks, Bad Day at Black Rock). Ed himself seems to be the only one suspicious of Stark's motives, but being the newest resident, he's having trouble convincing the rest of the town.

There are also several supporting cast taking the roles from varying chapters of the book. Luther Lindquist, the put upon husband of the domineering Kate Lindquist in one scene humourously compares his wife to Medusa which will foreshadow their fate inside the tent. There is also the vain yet aging Mrs. Cassin whose husband had left her and is constantly trying to keep face amongst the townsfolk.

Each are confronted with uncomfortable truths in the circus tent filled with magical creatures including Medus, Pan, Merlin and Apollonius of Tyana, all of whom bear the same face as Dr Lao (at least in their original form). This culminates in an impressive seven-headed stop-motion giant creature.

The tone is very similar to what Disney was producing at the time.  It was released in the same year as Mary Poppins, which perhaps explains the movie's obscurity but it wholly doesn't deserve it. It has not seen a DVD release in the UK and Warner Bros only marked it's 50th anniversary by releasing it on it's archive label (a US series of movies and TV showsthat are manufactured to order). One can only hope that a Blu-Ray release is forthcoming.