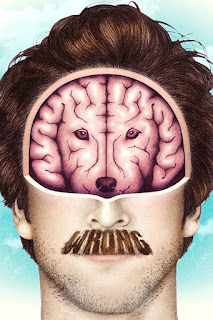 Art cinema can be difficult to define, especially to a casual movie viewer more accustomed to Hollywood narratives. Most tend to lump in everything that isn't made on America's West coast into this category, but I feel all movies can and should be considered art. Absurdist cinema on the other hand take this art to a whole new level, and Quentin Dupieux's 2012 movie Wrong takes the absurd to the Nth degree.

One of Dupieux's previous films, Rubber, had a wider release than most films of it's type due to the insane premise of a killer rubber tyre. It was lumped in with the 'so bad it's good' movies like Birdemic and The Room, but this hides a clever film that talks about the relationship between a film and its audience.

In my opinion, Wrong has a more personal and universal meaning, though it presents them in an alienating and absurd way. It is about modern life, the comforts we have grown accustomed to and the problems they chain to us.

The film begins with a fireman dropping trou and doing a number two in the middle of a street while a van is on fire in the early hours of the morning. His co-workers stand idly by next to their fire truck as it states 'keep back 300 feet'. An apt metaphor for the apathy of today perhaps?

Although the firemen do not reappear in the story, the burning van does have a plot-based point. It carried the stolen dog of our put-upon protagonist, Dolph Springer. He is a mild-mannered man who's only companionship is his dog, Paul. He seems so directionless that he continues to go to his job every day despite being fired several months ago.

This office is plagued by perpetual rainfall that the characters find oblivious, although the boss' office contains a large supply of towels for any meetings. Anyone with a basic knowledge of metaphor knows what the rain means, so why does Dolph continue to work at a place where he has been fired and whose ex-colleagues obviously show disdain towards him? A need for structure perhaps?

We never learn why he was fired and I don't think it particularly matters in the dream logic that the film lives in. The point is that he was rejected. Not only is his dog missing, but his neighbour leaves on a journey to anywhere and nowhere, a surly policeman finds ways to sarcastically berate him and his gardener has trouble with a palm tree turning into a pine tree. Everything is changing and his one constant - his pet dog - has at first thoughts run away.

It turns out that Mr Chang. a rich animal lover played by William Fichtner (The Dark Knight, Armageddon) has kidnapped him to make the owner appreciate their pets more. Unfortunately the man who kidnapped the dog crashed his van making the opening scene make a little more sense than it did. Just a little though. Luckily the dog escaped the wreckage.

There is also Emma, who works at a Pizza delivery chain. She has inexplicably fallen for Dolph, but cannot tell the difference between him and his french accented gardener. The gardener impregnates her with the fasted gestating baby ever conceived, but could actually be his dream (if it is, there's very little distinction).

Dog telepathy also plays a role as Dolph tries in vain to take control of the whole situation. Are all the strange events and imagery in the film a metaphor for modern social apathy? I've seen some interpretations speculate that it takes place in a society where humans have the psychology of that of a dogs - one that has some merit as a lot of people do share some of their canine character traits. Dolph's surname is Springer after all.

I have one other thought to try and make sense of it all. Apart from Dolph who has been forced into the changes in his life, all other main characters are trying to escape their current existence, each in different ways with little success. Dolph's neighbour has driven off to find another life, only to travel into nothingness. Mr. Chang wants to remove the self-inflicted scars on his face and believes his mis-placed altruism will help and Emma has left her husband to be with Dolph and the gardener (who are the same person in her mind). The gardener also wants to escape Emma's demands for a family with disturbing consequences.

Overall, does a film like this need to make sense? Will you get more enjoyment from it is every puzzle piece is put in its place? I think the insanity presented here works on its own giving it its own sense of style and humour. You can laugh at what happens on screen and the deliberate confusion it presents is part of the fun.

Unfortunately the film is unavailable in the UK at present, though if you choose to import the blu-ray it is region free so will play on European players.

You can see the trailer below.