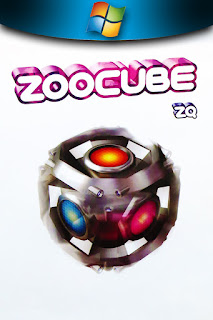 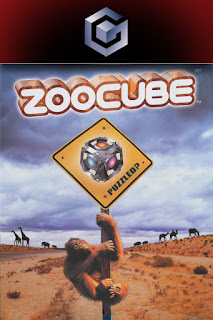 Zoocube is a fun and simple puzzle game for the GameCube that unfairly got mixed reviews upon its release in 2002. You are tasked with re-building all of the deformed animals of the world by matching their globular shapes together using the titular magnetised cube...

And that's the basic storyline for a game that gives the same kind of thrills as Puzzle Bobble or Puyo Puyo. It may seem basic enough, but there's a fully-fledged plot involved here, with some cinematic sci-fi cut-scenes interspersed amongst the game-play.

Any the game-play it's very simple - match two of a kind to remove them from the cube. If more than 5 shapes are stacked on anyone cube face then it's game over. Luckily there are bonus items that can help you progress. Each time an animal is restored, they leave behind a bonus. Clear the cube and many more are scattered. These hang around the blank space of the cube ready to be collected by the next shape. The difficulty ramps up when more species come into play - up to 36 in total and it does so quite quickly. One mistake can often lead to a level lasting a lot longer as you wait for the other half of the remaining cow or peacock to appear, only to see that pink shape you've never seen before that you think maybe a pig.

If a non-matching shape falls onto one side, it will stick. A tap of the shoulder buttons will shift the objects up or down. If this doesn't help you, a quick bomb will clear the row nicely. Another mechanic that adds an extra layer to the game is the ability to accelerate your pieces using the GameCube's A button. Not only will this speed the shape to its target, it will also lock it to that side of the cube giving you more time to focus on the next piece of pulsating animal bits. As an extra bonus, it will also spit out a bonus to collect.

There are different modes once you're tired of the main campaign. Blind mode removes the colour from the shapes allowing for grater difficulty (unless you're already colour blind). There are also a couple of multi-player modes if you have the friends. The co-op mode has two cubes on screen but it in order to win, you are required to send over some animals to you're neighbour. Versus plays a lot like the multi-player in Puyo Puyo. If you do well and collect certain items, they will have a negative effect on your opponent, making their game a lot harder.

Zoocube is a great puzzle game. It has a pick-up-and-play design that makes its peers so fondly remembered, yet it is incredibly difficult to master. It may have been overlooked on its initial release, but the almost perfect emulation on PC's is sure to get new players interested. Why not give a go yourself?

EDIT: As of 17th March 2019, I've added the original PC version of the game. While it plays just like the console counterpart, it is very stripped back in terms of visuals. It plays more like a prototype or proof of concept. It's a testament to the quality of that concept that even in this basic state ZooCube is immensely playable.

To download the GameCube version, follow the link below. This custom installer exclusive to The Collection Chamber uses Dolphin 4.0 to emulate the game on PCs. Xbox 360 controllers supported. Tested on Windows 7 and Windows 8.
07.12.2015 - Version 2 - Improved installer

To download the Windows version, follow the link below. This is a custom installer exclusive to The Collection Chamber uses dgVoodoo in conjunction with DxWind to run on modern systems. nGlide 3D Wrapper (included) must be installed. Tested on Windows 10.