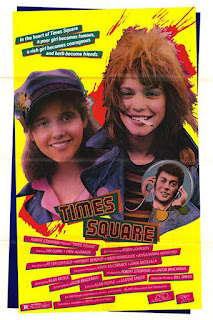 Disenfranchised youth movies became ubiquitous with the rise of punk culture and alternative music in the 70s and 80s culminating in in the slick Hollywood classics of John Hughes. Times Square, an early directorial effort from Pump Up the Volume and Empire Records' Allan Moyle, is a rougher take of the subject. Like those later films, music plays an an important role in the plot.

Nicky and Pammy, two confused teenage girls meet while in hospital where they are both being examined for mental illness. Pammy is the quiet daughter of a New York politician and Nicky is the troubled girl caught up in the welfare system are a series of abuses. Together they run away and form a bond that would ultimately see them become heroes to the youth of the city. Through the help of a late night DJ played by Tim Curry (Rocky Horror Picture Show), they become the Sleez Sisters, a punk rock group that is an outlet for Nicky's inner rage.

The movie is a time capsule of a grimy Times Square that has since drastically changed - you won't be able to make a period film on location anymore. It is thins seedy atmosphere that caused a lot of reviewers to dismiss the film as fantasy - these two girls will not have survived the pimps and drug addicts that populated the area. That's not to say that elements of such depravities don't exist. Pammy takes a job as a stripper in a nightclub (though the 13-year-old actress stays fully clothed) and they choose to sleep in a derelict factory near the river.

The girls form a bond that eludes to lesbianism. In fact the intended cut of the film was far more overt, which unfortunately makes the released film a little disjointed. The scene where Nicky breaks down on the radio pleading for Pammy's help after what appears to be a minor argument comes almost out of nowhere. It's a shame, really as I think this would've helped it gain a reputation as an actual classic rather than a cult one.

Watching the film with the foreknowledge of Moyle's other works, you can see that this plays like a proto-Pump or an early Empire. All three share themes of angered youth, cluelessly corrupt adults and the power music can have on individual expression. The three even share scenes - Nciky's final performance on the rooftops of Times Square echoes Renee Zellweger's number at the end of Empire. If you can imagine Tim Curry's character as a teenager from a decade later and you'll have Christian Slater's Harry Hardon from Pump.

Until recently, this movie did not have a DVD release in the UK although Germany did see  run a few years back. Even America only saw a limited run at the dawn of the format which can fetch very high prices on Amazon and eBay. Thankfully Network have released it on DVD in July last year. It's a barebones vanilla disc with no Blu-Ray version planned but at least it's available.

You can buy the film on Amazon by clicking here or on the image up top or you can take a further look at the trailer below.