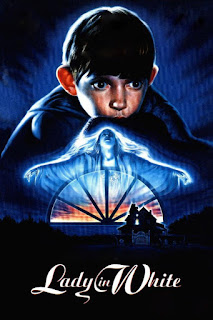 The Lady in White (1988), with it's themes of nostalgic youth and coming of age, plays a lost Spielberg film. It conjures up memories of the Halloween set E.T. or the Spielberg produced Goonies and Poltergeist. This spooky ghost story certainly conjures up thoughts of those 80s Amblin movies, but Lady in White holds it's own as something far more adult than it would first appear.

Frankie, played by a young Lukas Haas (Inception, Brick), is locked in the school's cloak room by some bullies on Halloween night. During his stay, he witnesses a ghost of a little girl reenact her murder that took places 10 years ago. After this all plays out, something far more terrifying takes place - the real killer who is still alive returns to the scene of the crime to retrieve something he dropped on that terrible night, and brutally attacked our young hero. He survives, but he is now haunted by the little girl who wants him to find her mother, the lady in white.

The film plays more like a spooky suspense thriller than a frightening horror, and you'#ll be guessing who the killer is right up until the reveal. There's more going for the film than just the chills. Set in a small town during the 1960s, it deals with issues of race, mental illness and community. When Frankie's been found barely alive, the black school janitor becomes the scapegoat. He is blamed not just for the recent attack, but for all of the 11 children that have been murdered over the past ten years. How this subplot plays out is both tragic and a poignant reminder that the nostalgic haze of the past masks some hideous social atrocities.

The entire film also uses masks metaphorically not just in the costumes of Halloween, but also the masks many characters put on to save face in society - the killer's closeness to the Frankie's family being the most shocking. This family are all masking some kind of pain. It is revealed that Frankie's mother died some time ago, yet it is rarely mentioned. The grandparents have an overly comedic schtick where the grandfather is ever trying to hide his cigarette addiction from his disapproving wife. It's a routine that is not just used to bring a smile on the viewer's face but also their grandchildren. The first think Frankie sees when he wakes up from his ordeal is his bickering relative, immediately bringing a smile to his face.

Frankie's brother, Geno, can also be seen as a comic relief. He teases his brother in a loving way, yet is proven to be a loyal ally when investigations go deeper. Despite all of the bickering and disfunction, they are all warm, loving and honest.

The only really negative I can see is down to the movie's low budget. While it is shot beautifully, the special effect were dated even in 1988. The ghosts rarely seem like they are part of the same world with the camera moving out of sync between the two superimposed images. The story and atmosphere are so strong, however, that these effects do not harm the movie as a whole.

The film was a labour of love for the director Frank LaLoggia. The tale was inspired by a local legend of the White Lady, a ghost who roamed his childhood town of Rochester, New York looking for her lost daughter. It took him a long time to raise the money, producing a fake trailer in 1985. He has not done much since, but what he has done is even harder to find than this one.

I first saw this movie as a child when it was shown on television in the early nineties. That recording saw a lot of plays in our house that it never seemed to be one that so few had heard of, let alone seen. It has only recently seen a DVD release in the UK, and the US are left with some over-priced remnants of a 2005 limited release on Amazon. However you are able to find it, The Lady in White is a film that I highly recommend, especially around Halloween.