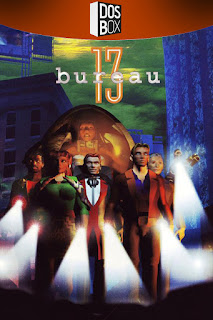 Bureau 13 is a point-and-click adventure game developed by Take-Two Interactive and released to the European PC market by GameTek in 1995. At the time, it received mixed reviews, praising its then state-of-the-art graphics and its few unique mechanics, while bemoaning the dull script and dubious voice acting.

The titular bureau is a top-secret government organisation tasked with discretely investigating 'dangerous paranormal entities' on American soil. During the opening mission briefing, we learn that one of their agents has gone rogue and has attempted to assassinate a local sheriff, leading our team to track him down discreetly so as not to alarm the town's residents.

The game was based on the pen and paper RPG designed by Tri-Tac Systems, however very few of its mechanics have travelled over in digital form - this is very much an adventure game and not an RPG. One of the elements carried over is the ability to choose two agents from a selection of playable characters, including a Priest, a thief, a hacker, a vampire, a white witch and, most bizarrely, a scantily clad Native American woman named Delilah Littlepanther in a massive mech suit.

Each character has their own unique abilities, for example, the thief can silently pick a lock to enter into a house, whereas the mech can simply and in keeping with the mission briefing bash the door down. The Witch also has a limited supply of magic, with each spell costing a certain amount of points to use, however, with a total of 200 points at your disposal, you're unlikely to deplete your reserves.

Despite the era's fascination with the paranormal, the game only sold modestly. Maybe this 'discreet' organisation's employment of such an inconspicuous group didn't connect with audiences as much as a couple of mismatched FBI agents seen our television screens.

As you can probably tell, there's an unintentional sense of humour running throughout the adventure, from the sober narration, the comically unprepared agents with no resources beyond their character traits to the uninspired soft-rock permeating its soundtrack. Is this agency so strapped for cash that they cannot afford the 25 cents for a newspaper, having to find the money conveniently sitting in the vending machine's coin slot? Better yet, why not let Littlepanther loose and destroy the thing. Come to think of it, why would this agency with access to top-secret documents need to get its information from a daily tabloid in order to progress?

This all leads to a game that is highly enjoyable in its sheer stupidity, a trait that is most likely its number one reason for it finding itself stored in the vaults. The over-the-top characters, constant stilted narration, and charmingly cheesy puzzle design lend this a B-Movie feel - the Plan 9 From Outer Space of computer games.

The game's deviation from its source's role-playing roots must've also played a factor in its descent into obscurity, disappointing an established fan base, however small. This was at a time when adventure gaming was one of the most popular genres on the gaming market. Bureau 13 would not have been able to compete amongst the revered likes of Discworld and Full Throttle that came out in the same year - games that have aged far more kindly than the primitive computer-generated graphic style Take-Two decided to adopt.

With this in mind, I grant Bureau 13 a pardon, barely scraping a release from the Chamber's vaults.

Do you not agree? Is the unique charm not enough to overcome the many flaws? Let me know in the comments.

To download the game, follow the link below. This custom installer exclusive to The Collection Chamber uses DOSBox to bring the game to modern systems. Manual included. Tested on Windows 7 and Windows 10.
01.07.2015 - Version 2 - Improved installer.
02.05.2016 - Version 3 - Compressed CD Audio


Bureau 13 is © Take-Two Interactive
Review, Cover Design and Installer created by me