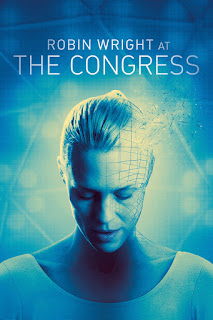 While the majority of those contained with the Collection Chamber hail from the days of yesteryear, The Congress, a 2013 movie that premiered in England during August of last to great critical acclaim, has only seen a home DVD release this past December. It is an animation/live-action hybrid by the same team that gave us the awesome animated documentary Waltz with Bashir

, proving that director Ari Folman has lost none of his inventive vigour after the transition to the English language.

Based on the novel by Solaris author Stanislaw Lem, the film sees Robin Wright (House of Cards, The Princess Bride) playing an ageing version of herself in the near future. In this reality an actor's likeness has become a commodity more so than their talents; an idea that causes the once Princess Buttercup to sign away her likeness due to a lack of work. This ironically leads to the biggest hits of her career - a series of Sci Fi action movies entitled Rebel Robot Robin.

The film is probably one of the most scathing indictments of the current Hollywood system and in particular the overinflated importance of the Actor in today's celebrity obsessed world. During a meeting with a studio boss set up by Robin's manager (Hervey Keitel, Reservoir Dogs

), he exasperatingly describes the realities of their current industry climate:

"Things are changing quickly. Very soon this whole structure you all love so much will be gone. [...] The structure around the actor, the agents, the managers - all the trappings - the trailers, the drugs, the coke, the depression, the break-ups, the lovers, the sexual kinks, the broken contracts, the terrible legitimisation of tasteless scripts, the post-failure blues, skipping out on PR, the begging for forgiveness. All that can be gone."

There is an element of truth to what he says. As someone who has worked briefly in the television and film industry, I know how meticulous planning and organisation in pre-production can too often lead to disorganised chaos and a hastily revised plans on set. With so much going on, a single diva can cripple the hard work of everyone on set. The larger the production, the more likely it can happen.

I remember working as a runner on a high profile BBC television show in the mid 2000s. It was two weeks behind schedule causing episodes to be delayed and stress levels to rise. One of the main causes of this was the lead actor questioning each scene on set - an issue that wouldn't have arisen if events in The Congress' first half come to pass.

The flip-side to this - and something the film only touches upon - is that we wouldn't see some great performances. This BBC show would not have been as long running and well-loved without this actor, instead starring a photo-realistic animation; we all remember the terrors into the uncanny valley that was The Polar Express and Mars Needs Moms.

It conspires that the technology used to 'scan' the actors goes much further twenty years down the line. Virtual worlds have become the norm where entire lives can exist within this alternative reality. It is here where the movie changes course from interesting speculative fiction to a bizarre yet no less interesting hand-drawn animation with anti-establishment undertones.

This 'Animated Zone' sports some amazingly trippy imagery reminiscent Max Fleischer and some of Ralph Bakshi's more out-there work, but with a poetic resonance rarely seen outside of Studio Ghibli. People here can take on any form they choose, drinking vials to temporarily turn them into Marylin Monroe or John Wayne, yet the only character with realistic proportions we see when we first enter the animated world is Robin herself. Designed to age her by 20 years, the animated performance beautifully conveys her confilcted emotion, something that's in stark contrast to the cartoonish contorting characters that populate the world.

The last act in the animated world is as exciting and intriguing as the fist half is poetic and thought provoking. To say any more would be doing a disservice if you haven't seen this masterpiece. It is the very definition of a Cult Classic and one that deserves to be mentioned in the same high regard as films as diverse as Brazil, Spirited Away and even Sunset Boulevard.

The Collection Chamber exists not only to to give the unique and unloved entertainment of yesteryear a new lease of life, but to undergo preventative measures. Needless to say this movie is unlikely to be forgotten by those who've seen it. Just make sure you do.

The film is available to buy now at Amazon. Click here or on the Blu-Ray image up top to head over and buy it. You can see the StudioCanal's UK trailer by continuing after the jump.