THE COLOUR OF MAGIC 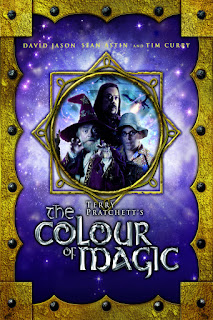 After the great success that was The Hogfather, Sky1 commissioned another Pratchett adaptation. Broadcast during the 2008 Easter holidays, it would this time be based on the very first novel (and its sequel) in the Discworld the universe; The Colour of Magic...

Like the Discworld games, this two-part miniseries stars Rincewind. Here the part is played by David Jason of Only Fools and Horses fame rather than Eric Idle. While he certainly acts the part, many fans feel he was mis-cast in the role, looking more confused and bewildered rather than lazy and incompetent.

After being unceremoniously expelled from the Unseen University, Rincewind finds himself in the company of the world's first tourist, Twoflower, played by Sean Astin (The Lord of the Rings trilogy). Essentially he's a plot device taking the viewer (or reader) into Pratchett's newly formed world, getting us acquainted with its many oddities.

These oddities, at first glance, are staples in the fantasy genre, but they are subverted and parodied making it a very distinct universe. Such famous tales that are given this treatment include the Sword in the Stone, and of course The Lord of the Rings. The scenes with an aging Cohen the Barbarian (can you see what he did there?) hilariously pinpoints the mundane negatives of being such a hero - there's no health or dental care and hemorrhoids are a bitch!

While these two take in the sights, the wizards back at the University are having their own dilemma. One of the wizards named Trymon (Tim Curry, Rocky Horror Picture Show) is hellbent on rising up the wizarding ranks by any means necessary. He brings his usual snarling persona to the character, but ultimately the true villain of the piece has no personality at all. The true danger the Discworld faces is that of a star heading straight for them.

There's a lot going on here, perhaps too much. What I've described doesn't even scratch the surface of what happens. The books are pretty much the same, focussing on jokes and send ups of other works. This doesn't mean its bad - the comedy and invention more than makes up for that, it's simply unfocussed in its storytelling. You can tell that the stories were early Pratchett as later novels added greater poignancy and clarity to the parody (see The Hogfather review).

Personally, this is my least favourite of the Sky1 adaptations. The main reason would be David Jason's interpretation of Rincewind. I grew up playing the Perfect 10 games and simply cannot imagine anyone other than Eric Idle in the role. He was the voice I heard when reading the books. That's not to say that I haven't revisited it every now and then, getting some enjoyment each time, and David Jason is fine here. It's just that he lost the blase sarcastic tone that I've come to love. He's also too old and grey.

On the plus side, Christopher Lee as Death pretty much makes up for any negatives you can probably think of.

If all this sounds like your cup of tea, you can buy the DVD or Blu-Ray at Amazon.