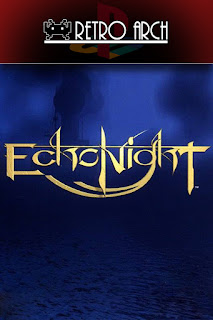 Echo Night is a horror adventure game released in 1999 for the original PlayStation. Considering the vast popularity of Sony's first console, you wouldn't have thought many of its titles are held in the Collection Chamber. This couldn't be farther from the truth...

Developed by FromSoftware, the game was unfortunately denied to European audiences for reasons unknown. If that developer has any meaning to any hard-core gamers out there, it's because they're responsible for the critically acclaimed Armored Core and Dark Souls series - some of the hardest yet satisfying games of the last generation.

Released in Japan and the U.S. midway through the PlayStation's life cycle, the game makes excellent use of the dated hardware. The environments are rendered in impressive detail given the limitations, really drawing you into the world and even going so far as to include dynamic day and night cycles. The only flaw is the slightly off-putting character designs, rendered in bulky lumps common in games at the time.

You take direct control of your character which can take some getting used to, especially those used to the more modern first-person games. While the D-pad allows you to move, looking up, down and strafing are assigned to the shoulder buttons. The DualShock controller's dual analogue sticks are sadly not utilised which is a wasted opportunity. This is alleviated somewhat in the custom PC-compatible download I've provided, giving a customisable control scheme (though the defaults have suited me adequately).

You begin the game by learning some terrible news. Your father has just died in a fire and the police have given you access to the charred crime scene because "you're family". The real reason is to lazily get us straight into the plot, so let's just put it to the back of our minds and call it cultural differences.

And being Japanese, the plot is filled with demon hunters, an over-abundance of politely depressed ghosts and metaphysical diatribes about one's soul told to us in a translation that varies wildly in quality. The real draw here, however, is not the plot - which in itself is interesting if a little convoluted - but the rich atmosphere and interesting puzzles. Most of the game takes place on the creepily well realised Orpheus, a passenger ship we learn has been lost at sea. We do leave the decks on occasion when we find one of the many books hiding around taking us on a tangent to different time periods It does get a bit muddled but it doesn't detract from the overall experience.

For a game this engrossing, it's a shame it didn't find its way to Europe. It was re-released on the PlayStation Network in 2007, but only to those fortunate Japanese gamers - why the English speaking world was denied this is again another mystery, but let's hazard a guess anyway. While FromSoftware published the game internally for their home country, the US release was overseen by Agetec, a company known to bypass many a great game for their frustrated European friends across the pond. For the past five years, the company has dedicated themselves to release shovelware for Nintendo's handheld systems. Their last 'actual' game release was Way of the Ninja 3 - a game that only disappointed in its unfortunate number of sales.

If ever a PlayStation game deserves to be rediscovered it is this one. It did see two sequels; the Japanese exclusive Echo Night 2 on the PlayStation and Echo Night: Beyond for the PlayStation 2. The latter actually found its way to Great Britain in 2006, only two whole years after its Japanese and North American release. This game manages to vastly improve on its predecessors and may yet see an escape from the Collection Chamber in the future.

It's about time we unlocked the vault and release Echo Night, letting it emerge from the darkness, blinking at the blinding shine of a bright new audience. Why not let us know your opinions and take a trip on the Orpheus? Just don't start waxing lyrical about your soul.

To download the game, follow the link below. This custom installer exclusive to The Collection Chamber uses Retroarch with a Mednafen_PSX core to emulate it on PCs. Keyboard controls are mapped to my preferred optimal specifications. Xbox 360 controllers supported. Tested on Windows 7.
01.07.2015 - Ver.2 - Improved installer
14.03.2019 - Ver.3 - Compressed ISO and improved menus


Echo Night is © FromSoftware
Review, Cover Design and Installer created by me